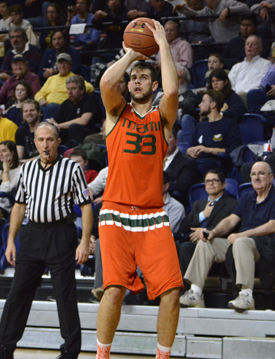 Ivan Cruz Uceda was back in the Philadelphia area on Tuesday night, but the Spanish forward did not look exactly like the player who was an honorable mention JuCo All-American at Harcum College two seasons ago.

No, the 6-foot-10 senior was thinner, quicker, more athletic and, for the night, the best scorer for the nation’s 13th-ranked team. Cruz Uceda scored a career-high 20 points in just 18 minutes as the Hurricanes handed La Salle its worst loss in program history at the Palestra.

Since arriving in Miami, Cruz Uceda has turned into a reliable shooter and defender for the Canes. In his second season, he is averaging 7.9 points and 19 minutes per game while shooting 57.4 percent from the field. All his numbers are up from his first Division-I season – well, all except his weight.

“If you saw a picture before and after from when he arrived at Miami, a year ago he was 24 percent body fat and weighed 237 (pounds). Now he’s nine percent body fat and he weighs 217,” said Miami coach Jim Larranaga. “His defensive abilities, when he was overweight, he struggled to keep people in front of him. Now he’s one of the best help defenders we have. He’s always been a good 3-point shooter, now he’s a little quicker and his teammates have a great deal of confidence in him.”

That confidence shined through on Tuesday as Cruz Uceda hit seven of his eight field goal attempts, including a 4-for-5 showing from beyond the arc. Larranaga called it “not an unusual night” and so far this season, Cruz Uceda is shooting 53.8 percent from distance – a mark that ties him for the 23rd-best mark in the nation.

It took the Madrid native a bit of time to find his 3-point stroke once he started playing collegiately in America, though. In his freshman season at Harcum College in Bryn Mawr, Cruz Uceda shot just 26.5 percent (13-for-49), but still managed to score 16 points per game.

When he was named an honorable mention All-American, Cruz Uceda hit 45.5 percent of his treys, shooting 40-for-88. This, along with his size and ability to rebound (he had 9.6 per game in his sophomore year), caught the attention of a lot of high major Division-I teams looking for a two-year player.

Cruz Uceda had interest from Marquette, Penn State, Ohio State and Villanova before deciding on Miami. Once he got there he got his South Beach body ready.

“I really changed my lifestyle, I had some really bad habits,” he recalled Tuesday. “So what I did was change my food habits, the way I was eating – more whole wheat stuff, no donuts, stuff like that. That really helped.”

At this time a year ago, Cruz Uceda was still waiting to get on the floor as he was ineligible for the team’s first 16 games due to transfer rules. Once he did, he made an impact for Miami, averaging 5.2 points and 3.5 rebounds in 21 games.  He has an even larger role on this Hurricanes team, which should make some noise in the ACC and a potential run come March.

Cruz Uceda got the chance to see some former coaches and friends from Harcum at the Palestra on Tuesday, and was pleased to play so well in front of them. And on the other side, they got to see a transformed player that is contributing at a high level on one of the better teams in the nation.

“There’s a big difference between junior college and Miami – everybody is more athletic,” Cruz Uceda said. “So I knew I needed to improve my athleticism, jump higher, move faster. And that’s what I did.”