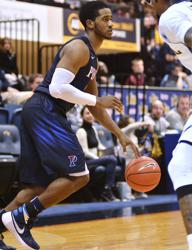 Antonio Woods had 17 points for Penn in an overtime loss to Drexel on Tuesday. (Photo: Mark Jordan/CoBL)

Penn had two chances on Tuesday night to hit a game-winning basket against Drexel. Both possessions came up empty, but the each had a common theme: Antonio Woods had the ball in his hands.

For a young team with a first-year coach, Woods is becoming the player who is going to handle the rock in high-pressure situations for the Quakers

“When Tony Hicks left, that really opened the door for Antonio to be the guy with the ball,” Penn coach Steve Donahue said after the 53-52 overtime loss to the Dragons. “I think he has a great way about him, he’s really scratching the surface of how good he can be. I think, in a lot of ways, it was a great game for him. He doesn’t finish that shot, but it was the right play, it was poised, it just didn’t go in.”

On the final play of regulation, with the teams tied 44-44, Woods received a handoff and then went off a screen from Darien Nelson-Henry with about five seconds left. With little room to drive, Woods took a jumper, a decent look that rolled off the rim.

In overtime, the Quakers were fortunate to get the ball back trailing by one with 18 seconds left after a Drexel turnover. Penn ran a similar play with Woods driving to the left side of the key off a Nelson-Henry screen.

This time, the sophomore guard got closer to the basket but his up-and-under with a few seconds left did not fall. Nelson-Henry even got a hand on the rebound, but could not tip it back. The game dubbed the “Battle of 33rd Street” was over, and the Quakers were on the losing end.

Donahue, however, was happy with the looks Woods got, especially on the last play in overtime. It’s all part of the learning curve for this Penn team.

“Once they hard hedged, Darien is going to drive and (Woods) would have more space,” Donahue said. “I thought Antonio did a great duck with a shot fake and a duck under, it goes in and out. And Darien has a good knack for tipping them in, and he got a piece of it, he just missed it. I was disappointed in shots not going down. Drexel does a good job of being physical, making you drive. …We needed a few bounces to go our way.”

Woods had a team-best 17 points against Drexel, and he is Penn’s third-best scorer this season, averaging 11.9 points per game. But he’s been more productive of late, with a 14.8 ppg average in Penn’s last six games.

It’s also become clear that when Penn needs a late basket, the ball is going to be in Woods’ hands, whether he ends up shooting on the play or not. Woods scored the team’s final six points in the final minute against Temple earlier this month, as the Quakers late comeback fell short against the Owls. And Donahue noted after Tuesday’s loss, he wants Woods, Nelson-Henry and sharpshooter Sam Jones involved if the Quakers are trying to tie or win a game.

“You like to have three of your best players involved,” Donahue said. “So we have Sam Jones involved in some kind of action, coming off a flare screen or something. Darien is screening for Antonio, so if the defense makes one mistake, we trust we’re going to make the right play. Antonio really only had one option (in overtime), and that was to go downhill.

“I thought he attacked well pretty much all night, it just didn’t go.”