With 'off the chart' intangibles, a savvy 'Nova squad handles St. Joe's 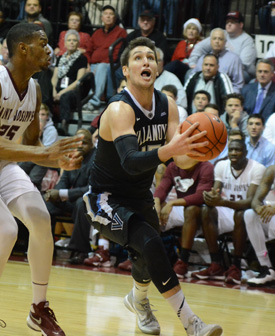 Ryan Arcidiacono (above) had 17 points in Villanova's 86-72 win on Tuesday. (Photo: Josh Verlin/CoBL)

Saint Joseph’s whittled Villanova’s lead down to five points about six minutes into the second half of Tuesday’s Holy War. The Hawks were on a 12-2 run and there was no point in the evening when Hagan Arena was louder.

Then Ryan Arcidiacono nailed a 3-pointer from the top of the key. Villanova’s lead was back to eight, and the crowd was momentarily muted.

With sharp shooting and a savvy roster, the No. 8 Wildcats had an answer for any and everything St. Joe’s threw at them in their 86-72 win.

“All credit goes to Villanova. I hate, because everyone uses this, but they just had this culture about them,” St. Joe’s coach Phil Martelli said. “A way of finding out where the hole was, where the weakness was and they exploited it.”

In the first half, Villanova consistently found good looks from beyond the 3-point line. The Wildcats grew a lead as big as 14 points in the first 20 minutes, thanks in large part to a handful of players knocking down long-distance shots.

Entering the game, the Hawks had limited opponents to a 27.3 percent clip from deep and none of the five teams they faced made more than six treys in a full game this season. Villanova had six in the game’s first 15 minutes.

“I don’t think that we rotated out in a scramble mode,” Martelli said. “I think we got a little bit frozen. You have to go like your hair is on fire in your rotations and I don’t think we did that. We were kind of stuck with our eyes wide open looking for their man instead of a man.”

The Wildcats ended up shooting 50 percent from the floor in the game, and a somewhat modest 35.5 percent on 3-pointers after going 3-for-12 in the second half.

But perhaps no shot had a bigger impact than Arcidiacono’s triple to stop the St. Joe’s run.

Villanova was up 10 at halftime and instantly grew that advantage to 15 to start the second half. With 14:08 left, Isaiah Miles hit a 3-pointer to pull the Hawks to within five points at 54-49. A stop and score away from a one-possession contest, the home team had all the momentum.

That’s when Villanova freshman Jalen Brunson drove on the baseline and found his backcourt mate on somewhat of a broken play.

“I remember they went on a little run and the place was going crazy,” said Arcidiacono, who finished with 17 points on 6-of-9 shooting. “So I know during that time, we had to calm ourselves down and try to drive in space. When Jalen drove baseline, I actually did the wrong thing, I was supposed to be in the corner for him, but he made an amazing pass and I caught to shoot.”

The Hawks stuck around for most of the game, but never fully recovered. It was plays like Arcidiacono’s trey where Villanova really separated itself, proving why it has won 11 straight Big 5 games.

“Their intangibles are so far off the chart,” Martelli said. “You all know me, I think it’s coaching nonsense (to say) ‘they play hard.’ They get a scholarship, they’re supposed to play hard. But that team, there’s no mistaking it, they play fierce. And that’s what they did.”

Added Jay Wright, whose team has five days off before traveling to Hawaii to face No. 6 Oklahoma:

“We just try to play the game the right way. I kind of know what he’s talking about. …I appreciate that from Phil. He and I talk when we’re together about teams. I think he looks at a guy like Jalen coming in, being unselfish. And a guy like Arch, as a senior player of the year in the conference coming back and doing the little things.”

Those little things made more than a sizable difference Tuesday.