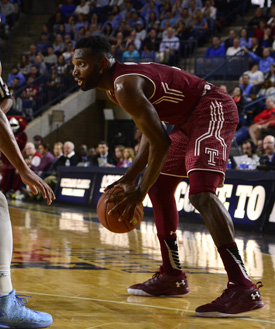 Josh Brown (above) and the Owls are taking part in the Puerto Rico Tip-Off this weekend. (Photo: Mark Jordan/CoBL)

Temple is getting tropical with its early season schedule, as the Owls are set to play in the Puerto Rico Tip-Off tournament, which starts Thursday.

The Owls, who lost to No. 1 North Carolina on Friday, will get three games in the event – one Thursday, Friday and Sunday. They have a solid test to start with an 11:30 a.m. showdown against Minnesota on Thursday, and the field is stacked with competition from bigger conferences.

Here’s a quick look at Thursday’s first-round matchups with each team’s record and KenPom ranking (as of Wednesday) in parentheses:

In a highly competitive field, Temple certainly has its work cut out for it in San Juan. Here’s our breakdown of the tournament:

Tournament favorites: Utah
It wouldn’t be a big surprise if the Utes, Miami or Butler left Puerto Rico with three wins and a trophy, but Utah enters as the top ranked team in both the AP poll and KenPom rankings. The No. 16 Utes already have an early-season win against San Diego State under their belts and are led by three forwards that are scoring at a high rate. Senior Jordan Loveridge (6-foot-6), as well as sophomores Jakob Poeltl (7-0) and Kyle Kuzma (6-9) create matchup nightmares for opponents. The trio of Utes Brutes (a nickname they should be called, if they’re not already) have all scored at least 37 points in their first two games and have combined to shoot 64 percent from the field. Loveridge leads the way with 22.5 points per game, and he has hit 10 of his 19 3-point attempts.

Temple’s take
Much like the Owls’ opener against the top-ranked Tar Heels, there is plenty of opportunity in Puerto Rico. But there’s also a chance for Temple to start its season 1-3 or 2-2 with no quality wins. The most important game for the Owls in this tournament is the opener against Minnesota. It not can give Fran Dunphy’s bunch a win against a Big Ten team, but will also put the Owls in the winner’s bracket and boost their strength of schedule, regardless of how their final two games go.

KenPom sees the Gophers as favorites against Temple, giving Richard Pitino’s team a 58 percent chance of victory on a neutral court. Temple hung with UNC for about 18 minutes, and there is still a lot to learn about this Owls team. One of the most pressing questions for Thursday will be whether forward Obi Enechionyia can play or not, and he would help to slow down Minnesota forward Joey King, who can score inside and out. It’s only November, but this tournament could really help shape Temple’s resume, and the Minnesota game is vital. A win likely sets up a tilt against No. 22 Butler, but a loss could create a matchup with Missouri State -- the lowest-ranked team in the bracket.

Local connections
Those who’ve paid attention to the Philadelphia basketball scene over the last few years are going to notice a number of familiar names in the eight-team field. The most recognizable outside of the Owls is Miami sophomore Ja’Quan Newton (Neumann-Goretti), the Catholic League’s all-time leading scorer and a three-time PIAA Class AAA champion. Through two games, serving as the team’s sixth man, Newton is averaging 11.0 ppg in 19.0 mpg, showing off the scoring touch he displayed all too often back home. And he’s not the only Hurricane with a Philly connection; starting big man Ivan Cruz Uceda (14.5 ppg, 5.0 rpg) is a product of Harcum College, a JUCO located in Bryn Mawr, and junior wing Davon Reed, averaging 16.5 ppg, is from Princeton Day (N.J.).

Temple’s first opponent, Minnesota, will pit a trio of Team Final alums against each other as the Owls’ Levan Alston and Trey Lowe go up with the Gophers’ Ahmad Gilbert. Gilbert, a 6-6 lefty small forward and graduate of Constitution HS, didn’t play in Minnesota’s opener and went scoreless in seven minutes of the team’s second game of the season. Finally, Utah sophomore Kyle Kuzma, who’s becoming one of the nation’s breakout players (18.5 ppg, 9.5 rpg), spent a few weeks in the city as he planned on a prep year at Rise Academy before deciding to spend the 2013-14 season at Utah as a redshirt instead.