What we learned from college basketball's opening weekend 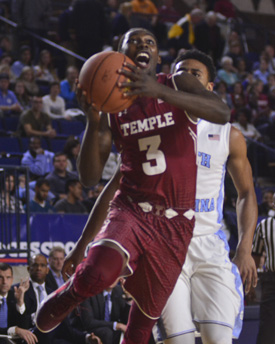 Temple freshman Levan Alston Jr. (above) was one of many rookies who started their careers off on the right foot. (Photo: Mark Jordan/CoBL)

Isn’t is nice to have college basketball back? The 2015-16 hoops season returned this weekend, with all 10 teams in the CoBL coverage area playing at least one game.

It’s a small sample size, but we did get to see each team in action, and it gave us at least a glimpse of what to expect for the next four months. Here are a few things we learned from opening weekend:

1. Get ready for some foul-heavy basketball
One of the most evident things Friday night was that, across the country, referees are enforcing the new rules strictly. The new rules, which allow for less contact from defenders, made games choppy and slow. In St. Joseph’s opener against Drexel, there were 52 fouls and 67 free throws; Lafayette and George Washington combined for 57 fouls and 73 free throws.

The NCAA wants games to be quicker, but until the players figure out how the new rules are going to be called and less whistles and free throws slow down the game, that’s not going to happen. Phil Martelli put it simply after the Hawks’ 82-81 win against the Dragons: “Two-hour TV games? Forget about it.”

2. Penn looks to be on the right track
The first 20 minutes of Steve Donahue’s tenure at Penn went about as well as they could. The Quakers opened their season by outscoring Robert Morris by 16 points in the first half on Friday evening at The Palestra. The Quakers didn’t run away with their opener, as they held on for a one-point win, but Sam Jones established himself as the team’s go-to scorer with 21 points in the opener and another 23 against Central Connecticut State on Sunday in a 77-61 win.  Penn will have to prove itself more once it gets into the teeth of its non-conference schedule, but the Quakers are 2-0 for the first time in a decade and there’s reason for optimism.

3. Lafayette needs Nick Lindner
Coming into the season, it was obvious that Nick Lindner was going to be Lafayette’s most important and best player. But Sunday’s game against Saint Peter’s showed just how important he is to his team.

Lindner scored 11 of his 22 points in overtime as the Leopards completed a nine-point comeback in the final two minutes for their first win of the season. They coughed up a lead after halftime as Lindner was held scoreless in the second half. Bryce Scott and Monty Boykins have proven themselves to be offensive assets, but Lafayette is a completely different team if Lindner is not on his game. The junior also had 27 points in Lafayette’s season opening loss to George Washington, but really helped keep his team in the game against a strong A-10 opponent. He might be the most important piece to his team of anyone in the CoBL coverage area.

4. Freshman class making an impact already
Almost every team in the area is benefitting from the play of its freshmen already, and in many cases some rookies have been some of the best players on the court for their respective teams. And though some of those were players that were known to be talented coming into the season, others have really opened eyes with their play in the first few games. The discussion for best rookie performance of the weekend comes down to St. Joe’s forward Pierfrancesco Oliva and Drexel point guard Terrell Allen. In two wins over Drexel and Niagara, Oliva averaged 12.0 ppg, 6.0 rpg and 4.5 apg, shooting 4-of-10 from 3-point range; Allen, in that losing effort, put up 18 points on 7-of-13 shooting, with four assists and four steals against one turnover to boot.

But they weren’t the only two who played well. Jalen Brunson, a top-20 freshman and potential one-and-done at Villanova, had 12 points and four assists in a blowout win over Fairleigh Dickinson. In a Temple loss to North Carolina, three Owls freshmen acquitted themselves well: Levan Alston Jr. had 12 points in 15 minutes, Trey Lowe had eight points, three rebounds and two assists in 19 minutes, and Ernest Aflakpui had two points, two rebounds and only picked up one foul in 12 minutes despite physical play inside. In two games for Lafayette, Paulius Zalys averaged 8.5 ppg and 3.5 rpg, while Penn State freshman Josh Reaves earned a start in his first college game, stuffing the stat sheet with six points, five rebounds, three blocks and two steals in 26 minutes.