Hawks proving they're more than just Bembry this year 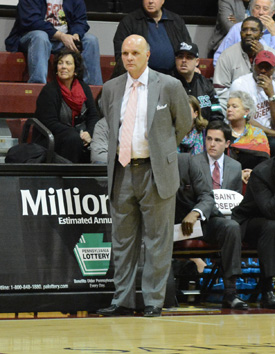 At halftime of Saint Joseph’s game against Niagara on Sunday, DeAndre Bembry had no points. He’d only taken one shot.

In a perfect world, Phil Martelli shouldn’t have to worry about his star player going scoreless over any 20 minute stretch. But at least this year, he’s got other options, and it’s already making a huge difference as the Hawks are off to a 2-0 start.

Even without Bembry making much of an offensive impact in the first half against Niagara, SJU scored 34 points and led by six. Though it wasn’t pretty--they shot under 36 percent from the floor--Martelli knows it would have been much different a year ago.

Eventually, Bembry got rollin.. Eight straight points by the eventually-NBA-bound wing keyed a 14-0 St. Joe’s run that led to a 73-62 win, but the athletic junior only needed to score a dozen points for his team to get there.

This year, he's averaging 17.5 ppg, 4.5 rpg and 4.5 apg. But they're 2-0, and a matchup against Florida next week doesn't seem like an impossible mountain to climb.

Against Niagara, Bembry was one of four players in double figures. Seniors Isaiah Miles and Aaron Brown had 14 points each on a combined 10-of-18 shooting, an efficient night for two pieces the Hawks need to be good in order to compete for a top-3 spot in the Atlantic 10 this year.

And freshman forward Pierfrancesco “Checco” Oliva has been the biggest surprise in the city thus far, averaging 12.0 ppg, 6.0 rpg and 4.5 apg through two games, shooting 40 percent from beyond the arc.

“We have Checco, me and Aaron Brown (to) just pick it up,” Miles said. “That’s the great thing, having so much depth, there’s so much skill on this team.”

When Martelli does go to his bench this year, he’s getting better production from players like sophomore wing James Demery, who had six points in 10 minutes, or high-energy redshirt freshman forward Markell Lodge, who had four points and six rebounds in 11 minutes before fouling out.

Despite its improvements, this St. Joe’s squad is still far from a finished product.

With three true freshmen and one redshirt freshman in the rotation, three new starters and one fifth-year senior (Papa Ndao) that will eventually return from a finger injury, there are plenty of moving parts still.

Martelli is still trying new lineups; point guards Shavar Newkirk and Lamarr Kimble, who are always on opposite teams in practice, played briefly together on Friday and spent a few minutes more on the court alongside each other on Sunday. Up front, Martelli played Oliva and Miles, Lodge and Miles, Oliva and Brown, trying to see what works and what doesn’t.

“I don’t know if it’s experimenting but we just keep looking,” Martelli said. “The way that I look at this is, we have two point guards, we have four wing players, and we have four frontcourt guys. So what’s the combinations?”