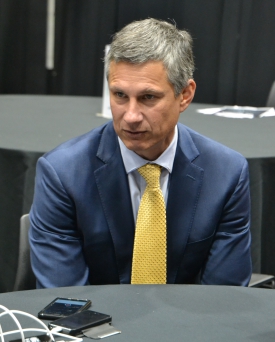 La Salle's John Giannini (above) is happy his team lost by one point rather than held on to beat Philly U on Saturday. (Photo: Madeline Pryor/CoBL)

When Philly U’s Kaison Randolph hit an outlandish, buzzer-beating jumper to lift his Rams over La Salle in an exhibition on Saturday, the team’s entire bench erupted.

With how the second half went, there was also one person on La Salle’s bench who was glad the shot went in, too: head coach John Giannini.

“I’m disappointed; I won’t sleep very much. But I absolutely am truly, legitimately grateful that we lost that game by one point,” he said after the 79-78 loss. "I think if he misses that shot, it really hurts us in the long run.”

Giannini, of course, did not enter Saturday expecting to lose to a Division II team one week before the Explorers’ season started for real. But when the tides turned in the second half, and he saw his squad getting beat on the boards and allowing basket after basket, Giannini figured losing the game would send a stronger message to his team than squeaking by with a one-point victory.

For Giannini, the actions of giving up 50 points in the second half and getting beat on the boards by 11, speak louder than any words he could have at practice or in the locker room.

“We learned every play is a big deal in one-point games,” said the coach, who is entering his 12th season at La Salle. “We learned you can’t give up 50 points in one half. We learned we lost because we got out-rebounded and didn’t defend. That’s it. And that’s a wonderful lesson. You can’t find kids with better attitudes. We just aren’t that good, and to get that good, we have to be far more consistent.”

Granted, La Salle was without two of its potential starters in guard Cleon Roberts and forward Tony Washington, who were both dealing with minor injuries and should be ready for Saturday’s opener. Giannini said Roberts had a back issue and the team didn’t want him to have any setbacks. Washington, meanwhile, got hit in the head in practice last week, but did not have any concussion symptoms.

There were also some first-half bright spots for La Salle. The team hit eight 3-pointers before the break and shot 64 percent from the field in the first 20 minutes. Freshman guard Karl Harris also had 12 points in the game, all coming in the first half.

But, judging from Giannini’s postgame comments, the biggest positive that should come out of this is the experience of losing.

La Salle is certainly not the first D-I team to slip up to a D-II school in early November. Giannini pointed to UAB, a team which last year lost an exhibition to UNC Pembroke by a point, only to make the NCAA Tournament as a 14 seed and upset Iowa State in the second round.

Giannini won’t be rooting for any more of La Salle’s opponents to hit game-winners this season, but he is hoping that the experience of seeing one Sunday will prevent that from happening.

“There’s just so much to learn from it,” he said. “I’m telling you, when you win close games (like this), you don’t learn, because you got away with it.”