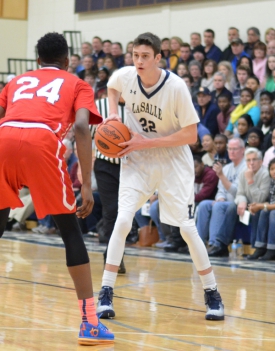 La Salle alum David Krmpotich (above) is aiming for a starting spot as a freshman at Colgate. (Photo: Josh Verlin/CoBL)

In his first four years as the head coach at Colgate, Matt Langel has steadily improved the Raiders’ offense.

He’s hoping that his new group of players helps spur a turnaround on the other end of the court.

The Raiders have gone from a team that was 255th in the country in offensive efficiency in 2011-12, according to KenPom.com, to one that was 78th a year ago. And the program has similarly improved, winning a program-record 12 league games in 2014-15.

But the defense is still well behind, allowing 1.08 points per possession last season, which was 285th in the country.

With four of his six freshmen standing 6-foot-6 or taller, plus the addition of 6-7 Bradley transfer Jordan Swopshire, Langel has more size and length than he’s had in his time at the Hamilton, N.Y. school, and that could make quite a difference over the next few seasons.

“I think there’s a couple of freshmen who can defend and block shots and make some above-the-rim type plays in that way,” Langel said. “Hopefully (that results in) a better defensive team that’s more active and longer and more athletic and can create some opportunities on the offensive end because of a deflection, because of a blocked shot, because of some of those characteristics.”

One such freshman with the chance to be a high-level defender is local product David Krmpotich, a graduate of La Salle College HS. A 6-7, 185-pound forward, Krmpotich has a long, athletic frame that allows him to guard most positions on the floor, inside and out.

He had a successful debut for the Raiders during their August trip to Spain, averaging 8.3 ppg and 5.5 rpg in four games against professional teams with stronger, older competition.

That’s only added to his confidence as he aims for a spot in the starting lineup on Nov. 13 when Colgate opens its season at George Mason.

“I wouldn’t say the goals have changed, but I would say I’ve just began to realize how to achieve those goals,” he he said. “How to play better to appeal to the coach so he thinks I’m worthy of a starting spot.”

And of course, that starts on the defensive end.

A talented shot-blocker in his days at La Salle with his long arms and good timing, Krmpotich knows it’ll be his ability to help protect the rim from the weak side and attack the glass on both ends of the floor that’ll keep him on the court.

“I think offensively I’m doing fine, I’m hitting my shots, still being aggressive and everything like that,” he said, “but I think defensively I have to adjust. I’ve got to play on the help side more and just be as aggressive on defense as I am on offense.”

Krmpotich is one of a few area players who should see significant playing time for Colgate over the next few years.

Sean O’Brien, a Penn Charter alum, played in all but one game last season as a freshman, averaging just under one point and rebound per game in around eight minutes of action per contest. And Wildwood Catholic alum Jordan Robertson, a 6-3 wing, had a strong Spain trip of his own, scoring 16 points one game; he should become a more regular member of the rotation after seeing action in 14 games a year ago.

With guards Luke Roh, Pat Moore and Damon Sherman-Newsome all having graduated--five of Colgate’s top six producers exhausted their eligibility--there’s certainly a lot of minutes up for grabs.

While Langel wasn’t sure what O’Brien’s exact role would be, saying “if we had to play a game tomorrow I don’t know who we’d play, let alone start,” he made it clear that the 6-2, 190-pound combo guard was making progress and should only see an expansion of his minutes and possessions.