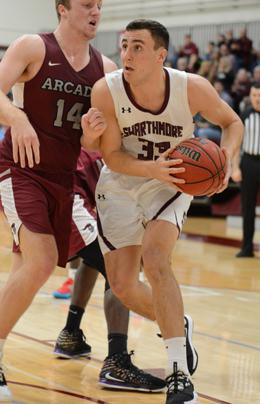 Zac O'Dell (above) and Swarthmore are the No. 1 team in the country. (Photo: Josh Verlin/CoBL)

The first time Nate Shafer and Zac O’Dell each heard that Swarthmore College was interested in recruiting them, they had the same response: who?

“My high school coach is the one that initially connected us, he was like ‘this coach wants to talk to you from Swarthmore,’ and I said  ‘Swarthmore, where’s that?” said Shafer, who hails from McLean (Va.), just outside Washington, D.C. “I hadn’t even heard of it.”

Landry Kosmalski wasn’t insulted that the two then-high schoolers hadn’t heard of his program or the school of less than 2,000 undergraduates buried in the heart of Delaware County, about 45 minutes outside center city Philadelphia. After all, he hadn’t really heard of them, either.

And he certainly had no clue how important Shafter or O’Dell would become to his team.

When Shafer and O’Dell were juniors in high school, Kosmalski was only in his third year at Swarthmore, helping a Garnet program that had spent most of its time in the Centennial Conference cellar build its way towards .500. Though he and his staff were always out recruiting and on the lookout for high-academic targets, both Shafer and O’Dell were unique recruits.

Shafer’s high school coach at Langley (Va.) reached out to Kosmalski, curious to ask the former Davidson player and assistant coach if he thought Shafer, a 6-foot-6 forward, was good enough to play in college.

O’Dell and Swarthmore’s coaches found each other with the help of an online recruiting database, an email getting the whole process started. Kosmalski only saw the Schalmont (N.Y.) rising senior for half a game during the summer, but took his commitment after assistant coach Brendan McShea watched more of the 6-7 forward and liked what he saw.

It wasn’t until after O’Dell committed that Kosmalski was able to get up to New York to really see his future big man play a full game.

“I went and saw him his senior year around Christmas time, and of course texted Brendan and said ‘you blew it, but I was joking,’” Kosmalski said. “Because he was obviously a stud.”

Now seniors at Swarthmore, Shafer and O’Dell form one of the best frontcourts in all of Division III hoops for the Garnet, who are undefeated on the season and ranked No. 1 in the country by D3Hoops.com. Constant contributors since their freshmen year, they’ve played in a combined 195 games as of the Garnet’s 89-72 home win over Arcadia on Sunday, with 113 combined starts. Entering their senior seasons, O’Dell was 222 points from 1,000; Shafer was 291 away. 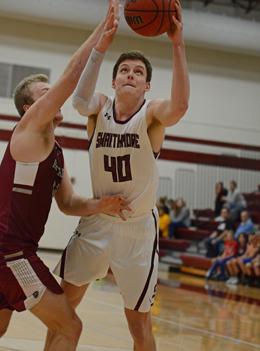 Nate Shafer (above) has played at least 18 mpg every season he's been at Swarthmore. (Photo: Josh Verlin/CoBL)

Coming in behind an already-strong frontcourt in Chris Bourne and Robbie Walsh, Shafer and O’Dell quickly became a problem pair of their own. But that wasn’t obvious from the outset.

“We were just wide-eyed freshmen…[there was] no chance that we’re coming in like ‘oh, the two of us, wow, this is some impressive duo,’” Shafer said. “When we were here, there already was two excellent frontcourt players playing in front of us that we learned a lot from, and that helped us grow into what we are now.”

Both starters on a team that’s now 6-0 after its win over the Knights, Shafer and O’Dell are part of a 10-man rotation that Kosmalski deploys with near-equality, though their play makes them tough to remove in close games.

O’Dell is the team’s second-leading scorer (11.3 ppg) and its leading rebounder (10.2 rpg), averaging that double-double despite playing just 25 minutes per contest. Shafer averages 9.5 ppg and 6.3 rpg, leading the team in blocks (17), while playing 23 mpg.

With a host of talented sophomores and freshmen seeing minutes around them, those two senior presences are even more important on the floor and even as voices from the bench.

“We were definitely excited to get both of them,” Kosmalski said. “I didn’t imagine they would evolve quite like this, and that’s to their credit...they just play like all-Americans. It’s just unbelievable to have them out there.”

The idea of an All-American at Swarthmore was crazy when Kosmalski took over, but recently-graduated Cam Wiley became the program’s first, earning third-team honors in 2016-17 and first-team honors this past season, while O'Dell was a third-team mention as a junior. Swarthmore’s program overall has reached new heights each year since Shafer and O’Dell committed, going from that team striving to reach .500 to one that’s fresh off a national championship game appearance, its third-straight March Madness trip after having never been before.

Shafer and O’Dell came to a program on the rise; no matter what, they’ll leave one that’s just about at the pinnacle of Division III hoops.

“Once I figured out what we were all about in terms of the culture and how we do things as a group, every single day, none of what we’ve done has been surprising,” Shafer said. “That’s a byproduct of the stuff we do every day in practice, and it’s an expected result for us, the success.”

“I don’t think I would have believed it if you told me day one, but seeing the culture we have now, and seeing the group of guys we have, it’s definitely something we can do.”

After the season ends, and their final semesters of college wrap up, O’Dell and Shafer have some different plans. Shafer intends on seeing if he can continue his professional career abroad, as several other recent Swarthmore grads have done –– another new path for Garnet hoopers.

O’Dell has different plans: a Ph.D. in Chemistry, which means another half-decade (and likely more) of courses and research, with a to-be-determined career at the end. He’s already been published, co-authoring a paper with Swarthmore professor Kathryn R. Riley (and several others) entitled In Situ Quantification of Silver Nanoparticle Dissolution Kinetics in Simulated Sweat Using Linear Sweep Stripping Voltammetry. (“Understand it? I could barely pronounce the title of the article,” Kosmalski quipped.)

Before that all happens, they’ve got plenty of basketball left to play in Garnet uniforms. Centennial Conference play starts in earnest soon, with Ursinus (4-2), Gettysburg (6-0) and No. 22 Johns Hopkins (6-0) all coming up in the next 10 days.

The 6-0 start is nice, but it doesn’t take many losses to wind up on the wrong side of the Division III bubble, and the Centennial is shaping up to be one of the most competitive races around, with four teams still unbeaten on the season. So, that current No. 1 ranking next to the Garnet’s name?