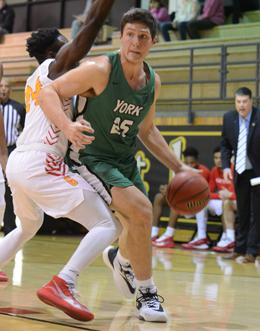 David Giuliani first noticed his family when he came out for warmups with the rest of his York College teammates.

How could he not? Gwynedd Mercy’s gymnasium only hosted about 200 people for a holiday week non-league matchup between the Griffins and Spartans –– and about 50 of them were Giulianis.

“I thought it was just going to be my parents, my siblings, and I had a couple friends who said they were coming,” the York junior forward said afterwards. “But it was everybody -- aunts, uncles, little cousins, it was awesome.”

Giuliani’s family –– his own house just a couple minutes from Gwynedd Mercy's campus –– filled up a solid section of the bleachers at the Griffin Center on Tuesday night, from front row to back, making it feel more like a Spartans home game in Montgomery County. That was obvious from the pre-game introductions, when Giuliani’s name in the starting lineup drew a startlingly loud roar, making it clear who the fans were there to see.

“Oh yeah, I heard that,” he said with a grin. “As soon as we came out for warmups, and when they announced my name, everybody went crazy, I was like ‘Oh my god.’”

They roared when he scored the first basket of the game, and each time afterwards the 6-foot-4, 225-pound forward put the ball through the hoop –– something that happened rather often during the match of top-five programs in the latest CoBL-area Division III Power Poll.

Inspired by his family’s presence and the challenge of an unbeaten Gwynedd opponent, Giuliani had himself a career-best 19 points and seven rebounds, plus three assists and a single turnover, as York topped Gwynedd 88-67.

“It’s awesome, it’s so cool to have such a supportive family, and to have them all be able to make the trip over here today, even though it’s not too far, just means a lot to me that they would do that,” he said.

“He’s proven that he can score in the post, defend the post, rebound the ball at a pretty high level,” York coach Matt Hunter said. “He played some last year, but he’s in a much bigger role, and the more he plays, the more comfortable he’ll get.”

It might not seem like the extended Giuliani family would go that long without seeing David play basketball, given that York College is only about two hours’ drive from North Wales. But even though he’s a junior and one of the Spartans’ best players, he went nearly two years without making a significant impact on the court.

Giuliani starred in high school for Phil-Mont Christian and then North Penn, where he graduated in 2017 after earning first team All-Suburban One Continental honors. He committed to Division II Merrimack College (Mass.) that January, but that didn’t turn out quite as planned.

Just before Giuliani’s sophomore season, after he’d played a total of just 24 minutes as a freshman, Merrimack announced it was making a move up to Division I starting in 2019-20. Head coach Joe Gallo and his staff were going to be recruiting at a completely new level, and Giuliani saw the writing on the wall.

Giuliani transferred after the first semester of the 2018-19 season, landing at York, where Hunter had recruited him out of high school. The NCAA does not force transfers who go down in level to sit out, so Giuliani was immediately eligible for the Spartans. But he didn’t make much of an impact at first, playing in just one of the first five January games and seeing single-digit minutes in seven of his first 10 appearances.

But he played a season-high 23 minutes in York’s final game of the year, a loss to Randolph-Macon in the second round of the NCAA Tournament, a sign of bigger things to come.

“We made him shake off the rust in a hurry last year, he ended up playing down the stretch for us, played in the championship game, played in the NCAA Tournament game, so he got a little bit [of rust] off then,” Hunter said. “He’s in much better shape now and it shows, he’s a very effective player.”

Through the first six games of York’s season, Giuliani’s averaging 12.2 points and 6.8 assists. His family got to see not only his career highs in points, but they saw him play more minutes (30) than he had in any game since high school.

And even though much of his production was right around the rim, just as it was in high school, Giuliani’s developed one key trait that’s enabled him to be as productive now as he was back then.

“Dave is a beast,” senior guard Jared Wagner said, “and a really important part to our team and our success.

Giuliani isn’t the only one enjoying a breakthrough season: his former Merrimack teammates have made national headlines in their first season of Division I competition, already beating a Big Ten foe (Northwestern) and opening up their first season with a 5-3 record through eight games.

“They’re a great group of guys, and their defense up there, it’s awesome,” Giuliani said. “So it’s not too big of a surprise."

The win over Gwynedd Mercy pushed York to 4-2 on the season, the two losses coming to strong programs in Roanoke (Va.) and Johns Hopkins (Md.), the latter of which is now ranked No. 22 in the country according to D3Hoops.

Things won't get much easier, with games against Franklin & Marshall, Scranton, Delaware Valley and Cabrini coming up before the holidays, and the always-tough Capital Athletic Conference slate beginning in 2020. But the Spartans, who are coming off back-to-back NCAA Tournament appearances under Hunter's guidance, have high hopes yet again.

“I think we can go really far with this group,” Giuliani said. “We have a great group of guys, we have a lot of talent, we just have to buy in and start doing what we do. We have some tough games coming up, but I think we’ll be able to handle the pressure and get those wins.”

Wanted to focus the feature on Giuliani, but couldn’t leave out the performance by York senior guard Jared Wagner. The Central York product is one of the best small-college players around, and he showed why against Gwynedd: 21 points (6-10 FG, 2-4 3PT, 7-7 FT), 12 assists, five rebounds, four steals, and a block in 39 minutes. Wagner got his team into sets, paced the offense, found shooters, and led the defense as well. It was an impressive performance.

York’s 3-point shooting through the first five games had been so-so, only about 34%. But they were lights-out in the second half, going 10-of-16 from deep to pull away. Freshman Logan Collins popped off the bench for 11 points, hitting all four of his shots (and two 3s), and wing forward Zach Novick was 4-of-7 from deep off the bench for his 12 points. All-in-all, seven different players hit from deep for the Spartans.