Magee wins No. 1,100 in grand fashion as Jefferson rolls 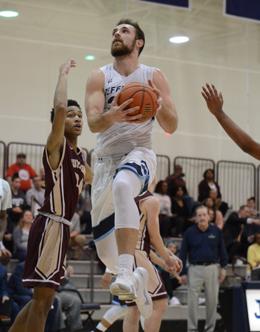 Josh Bradanese (above) was honored for his 1,000th point before Tuesday night's game against Kutztown. (Photo: Josh Verlin/CoBL)

A night designed to end with one celebration began with another.

There was no mention of the milestone that Magee himself was on the edge of reaching, the reason the stands at the Gallagher Center at the school’s Henry Ave. campus were buzzing the way they do every four or five seasons –– whenever another milestone victory approaches, hangs around for a moment, and then passes, letting the anticipation build for the next one. No glances yet at the curled-up banner hanging over the corner scoreboard.

No, the pre-game was about Bradanese, who had just become the most recent 1,000-point scorer in the Rams’ illustrious history, the 47th to play under Magee.

But once the game was underway, all eyes turned to the sideline, and to the scoreboard, to watch Magee’s first attempt at becoming just the second NCAA college coach with 1,100 wins, joining fellow Hall-of-Famer, Duke’s Mike Krzyzewski in the process.

Bradnanese set the tone, hitting his first three 3-pointers, as Jefferson jumped out to a 29-point lead and never let Kutztown make a run in the 98-79 win.

Magee celebrated afterwards on the court with his players, Frank Sinatra’s “My Way” playing on the public address system as Jefferson University president Dr. Stephen Klasko presented him with a commemorative ball. (The Rams planned this well: coming into the season with 1,096 wins, Magee played his first three games on the road followed by five straight at home, all but confirming he’d reach the milestones in a friendly confines. It was a smart gamble). 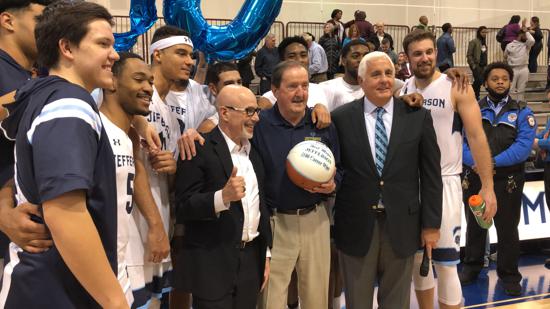 But by the time Magee had made his way to a brief post-game press conference, his mind was already moving forward.

“People will say, ‘Herb, what do you think about the 1,100 wins?’” he predicted. “That’s over. What we’ll concern ourselves with is [Saturday’s opponent] St. Thomas Aquinas, who’s ranked 20th in the country.

“To be in the same sentence with (Krzyzewski), as far as the only two coaches to do it, that’s fine,” Magee added in his typical understated manner. “Tonight, 1,100 wins –– that’s nice, but it’s not important.”

Bradanese finished with 25 points, hitting 8-of-10 shots and 5-of-6 from deep. That paced a shooting effort which saw Jefferson hit 12-of-16 from deep in the first half alone, going 14-of-22 for the game as they spent much of the second half at the foul line (where they went 20-of-24).

A 6-foot-6 forward out of Billerica (Mass.)’s Billerica Memorial  –– a school best known for producing Tom Glavine –– Bradanese is one of several seniors who’ve eaten up a ton of minutes for Magee the last few years, including point guard Kylan Guerra, wing Prince Hickson, and forward DeVaughn Mallory, who’s in his third year with the program after playing his first two seasons at Delaware State.

“It’s special, winning games with these guys,” Bradanese said of his fellow seniors. “We’re really close, we’ve come to be pretty much best friends...there’s nobody else I’d rather be on a team with and win games with, it’s something special.”

Though Bradanese is from the same state where Magee is enshrined at the Naismith Hall of Fame in Springfield, he didn’t know about Magee’s history or presence until his recruitment, having visited the Hall before Magee’s 2011 induction. But like many who’ve played for the Shot Doctor during his five-plus decades running the Rams’ program, it didn’t take long for Bradanese to come around.

“I can’t even put into words how much I’ve learned from him, the game in general,” Bradanese said. “I mean, he’s taught me so much, and I’m so thankful to be a player for him.”

There’s no doubt that each passing milestone becomes more significant for Magee, who’s been at the school formerly known as Philadelphia Textile and Philadelphia University in some capacity for over six decades. Now 78 years old, Magee’s outstayed just about all of his contemporaries, now that Harry Statham (1,122 wins at NAIA-turned-D-II McKendree University) retired last year; Magee and Statham both took their positions the same season. But Magee has no public plans to step away from the sidelines anytime soon.

This year’s group looks every bit like Magee’s 31st NCAA Tournament squad, off to its unbeaten start, though the upcoming contest against STAC will be the toughest test yet for these experienced Rams.

In fact, Klasko said at a brief post-game press conference, he recently extended Magee’s contract, keeping the ball coach around for a few more years. Really, Magee will stay as long as he wants to –– not a minute more, or a minute less. Could he get to 1,200? Easily. Thirteen hundred? Why not.

“In Philadelphia,” Klasko said, “we have Rocky, we have cheesesteaks, and we have Magee.”