Penn's Betley back to business after year out 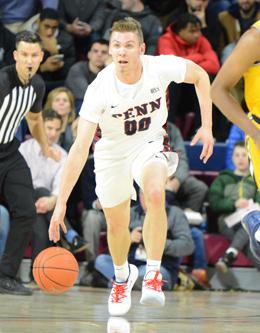 Ryan Betley (above) looked like his old self in Penn's Big 5 win over La Salle last Wednesday. (Photo: Josh Verlin/CoBL)

At this time a year ago, Ryan Betley was having a hard time getting accustomed to watching Penn’s games from the sideline. Now, he’s adjusting back to playing basketball.

Betley played just five minutes last season before rupturing the patellar tendon in his right knee during Penn’s opener at George Mason. He knew his season was over from the moment he noticed his kneecap on his inner thigh. And for a player who was supposed to lead Penn’s backcourt on another run at the Ivy League title, it wasn’t an easy transition.

“After that happened, you’re kind of down in the dumps for a little bit,” Betley said. “It was brutal for me at first. It doesn’t really hit you for a little while. Once it got to mid-season, it kind of catches up to you that, yeah, you’re sitting out the whole year.”

It took Betley a couple of weeks to recover from the initial shock and disappointment. He had never dealt with such a serious injury before. But he was diligent as he entered recovery mode and soon adapted, cheering on and supporting his teammates on their run to the Ivy League tournament. By the end of the following offseason, Betley was healthy and ready to return to the court.

Where Betley’s adjustment period to injured life had taken two weeks, this season’s transition back on the court took him two games.

Following a pair of forgettable showings at Alabama and Rice to open the 2019-20 campaign, in which he scored a combined 16 points, Betley rediscovered his groove in Wednesday night’s Big 5 opener against La Salle. The 6-foot-5 Downingtown, Pa. native looked like the same player who had finished Second Team All-Ivy his sophomore year, hitting key shots down the stretch to propel Penn to a 75-59 win and surpassing his previous two outings with an 18-point, eight-rebound, zero-turnover performance.

“The first two games, I was just getting back in the swing of things,” Betley said. “I could have been more aggressive and that’s something me and [Penn head coach Steve Donahue] talked about after the first two, especially after the last one. I’ve got to do what I do best to help our team win and that’s shoot the basketball. For me, that’s being more aggressive from the 3-point line and getting to the rim, so that’s something that I focused on in practice after the Rice game and that was my mentality heading into the game.”

Against the Explorers, Betley and the Quakers reminded spectators what makes Penn such a dangerous team. With Betley (4-of-9 from 3-point range) draining outside shots, senior AJ Brodeur (20 points, 13 rebounds) scoring in the paint, and senior Devon Goodman slashing through the defense for a game-high 21 points, Penn had offensive firepower to pair with its usual stellar perimeter defense and rebounding, and La Salle simply couldn’t keep up.

It’s that combination that took the Quakers to the NCAA Tournament during Betley, Brodeur, and Goodman’s sophomore season, in which Betley led Penn with 14.3 points per game, and it’s something that was missing at times during last year’s March Madness-less campaign.

“I think you saw last year when we didn’t have [Betley] going down the stretch how we really were scrambling for some offense,” Donahue said. “He does a couple things -- one, his ability to shoot the ball; but he’s not just a shooter, because half his buckets are 2s.”

While a large fraction of Betley’s contributions this season will come in the form of made baskets, he, Brodeur, and Goodman will also be charged with captaining a very young and inexperienced Quakers squad. Brodeur and Goodman are the only returning players who played significant minutes last season and Penn’s current rotation could very well feature four freshmen at some point during the season.

The shared chemistry between the three captains will certainly work in their favor. Betley, Brodeur, and Goodman have spent years living with one another and hanging out off the court as well as on it, and each player knows what the team needs to do under Donahue’s game plan in order to succeed. Against La Salle, the trio combined for 59 of Penn’s 75 points, commanding the team in all facets of the game as younger players continued to settle into their new roles.

“We’re a super tight group,” Betley said. “When all three of us are clicking, you’re going to see a lot of good basketball, and it’ll make it easier for the younger guys to step into their roles.”

Leadership is something of a new frontier for Betley and his fellow co-captains, who for three years had relied on the class above them, Donahue’s first incoming class at Penn and a charismatic group which included the likes of Max Rothschild, Jake Silpe, Jackson Donahue, and Antonio Woods.

“When you have that for three years then all of a sudden they’re gone, it’s kind of like ‘wow, it’s us now,’” Betley said. “It’s me, Devon, and AJ’s time to lead the team, and it’s something that we hadn’t necessarily had to do for the first three years, we could just play basketball and lean on them to lead the team.”

Being a vocal leader isn’t necessarily something that comes naturally to Betley. A more reserved character, he’s not the rah-rah personality Penn had in Rothschild and Donahue, and he’s still developing the innate leadership displayed by Woods and Silpe. But if the last year of sitting on the sideline taught Betley anything, it was how to be a more supportive teammate.

Unable to make an impact on the court, Betley did what he could to be a positive force for his teammates, providing encouragement and moral support throughout the season.

“I just wanted to find a way to be the best teammate I could and not feel sorry for myself. Do what I can to get myself better and help my teammates get better too,” he said. “I wouldn’t say I was out there being a third coach or a fourth coach, I just wanted to be someone that could lighten the mood in the locker room when things were going tough, encourage my teammates, stuff like that.”

Betley now will put those skills to use together with his scoring abilities as he settles into his position as team captain and a top-two offensive option for the Quakers.

With the NCAA moving back the 3-point line this season, Betley will be especially critical to Penn’s success on offense. Donahue’s Quakers pride themselves on taking 95% of their shots either at the basket or from 3-point range, and as the team’s most consistent perimeter threat, Betley will be the one to set the tone when it comes outside shooting. As we’ve seen time and time again from Penn over the last few seasons, making open shots is the key difference between wins and losses for this team, and Betley will have plenty of opportunities.

Betley has a lot of responsibility to carry in his final season at Penn, but with his recovery and Wednesday’s bounce-back game in the books, it’s nothing he can’t handle. Alongside Brodeur and Goodman, Betley will make a big impact for the Quakers on and off the court, and if he can consistently churn out performances like the gem he produced against La Salle, things will be looking up for the defending Big 5 champs.