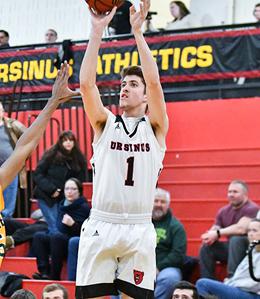 Ryan Hughes (above) is averaging 16.8 ppg through the first four games of his sophomore season. (Photo: David Morgan/Stylish Images)

GRANTHAM — Ryan Hughes could have been deeply disappointed Friday night as he popped out of his team’s Hitchcock Arena locker room, but instead of dwelling on his team’s first loss the talented Ursinus sophomore chose a different approach.

Especially since the 6-4 wing, his teammates and a remarkably experienced Ursinus coaching staff learned a number of important things during their semifinal-round scrap at Messiah College’s uber-competitive Tip-Off Tournament.

Dependent on an explosive attack in their first two victories one week earlier during a four-team tournament in Williamsport, Kevin Small’s Bears learned they can defend — and quite well. Yet they also discovered they have the fire, want-to and the pieces in place to hang with one of the nation’s top Division III basketball programs.

So while a 54-50 loss to No. 24 Randolph-Macon in a tight-fisted contest that was still up for grabs with 10 seconds to play didn’t sit well with the fellas from Collegeville, at some point Ursinus may need to lean on its defensive abilities to nail down a result.

Maybe more than one.

Hughes still managed to post a double-double (11 points/12 rebounds) and he was yo-yoing the ball down the floor — absorbing contact throughout his journey down the left boundary — before an iffy traveling call ended a bid for a tying or go-ahead hoop.

“It tells us that we’re willing to fight and, like Ryan (McTamney) was saying, we’ll play anybody anywhere,” said Hughes, who came into the Messiah tournament averaging 26.5 points per game after claiming most valuable player honors one weekend earlier.

“Rankings, they’re good and everything, but we just have to focus on ourselves and make sure we get better and better, so by February we’re playing our best basketball,” added Hughes, the former all-state player who had plenty of family and friends make the trip from nearby Middletown to see him play.

“Just like knowing this is a little milestone to where we want to be, so I think that definitely helps us.”

Picked third in the Centennial Conference’s preseason poll, Ursinus (15-11, 12-6) finished third in last year’s regular-season standings before falling to Johns Hopkins 90-81 in the semifinal round of the 10-team league’s postseason tournament.

Despite losing a handful of regulars — including three starters — Ursinus leaned on Hughes and La Salle College product Ryan McTamney at Williamsport in victories over St. Vincent and host Lycoming. So, Randolph-Macon made life difficult for those two.

While the 6-6 McTamney also popped a double-double (14 points/11 rebounds), no one else reached double digits in a game that featured little transition basketball and lots of slug-it-out halfcourt sets — regardless of which side was handling the rock.

Although Ursinus trailed by 11 early in the second half, Small’s determined Bears continued to chip away until a Hughes free throw gave them a 41-40 lead with 5:35 to go. Two more freebies from junior Bruce Edwards made it 43-40 a short time later.

Randolph-Macon continued to maintain its defensive intensity — whether in the man or 3-2 zones the physical Yellow Jackets employed — eventually regaining the lead. And despite getting to within one point or two, Ursinus never could surge back in front.

“I just praised them,” Small readily admitted. “One area I’m not worried about is our offense. I’ve been at Ursinus for 23 years … and we’re known for offense. Generally, us and (Swarthmore) lead the conference in all the offensive statistics.

“But I’ve been really concerned about the way we’ve guarded and this team, since our Cabrini scrimmage two weeks ago to today, we’ve come miles in terms of our cohesion and structure,” Small continued. “They’ve just been committed to trying to get better.

“So, this group has got a really high ceiling. It was fun tonight to lean on defense for the first time in many years, since our offense really wasn’t going very well.”

While Hughes was asked what he’d done to add ingredients to an offensive recipe already packing plenty of oomph — in the background, his coach uttered, ‘I’m doing everything Coach Small wants’ — he didn’t talk about specific skills he’d happened to master or hoisting X number of shots every day throughout the summer. 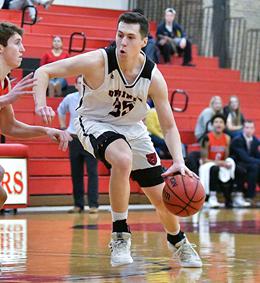 Ryan McTamney (above) tallied his 1,000th career point on Saturday in a win over Clarks Summit. (Photo: David Morgan/Stylish Images)

Hughes was more concerned about learning how to play with all of his teammates, whether it was seniors such as McTamney, juniors such as Edwards, George Gordon (Downingtown West) or Lucas Olshevski, classmates such as Peyton Vostenak or even newcomers such as Jimmy Kpadeh or Trey Koehler (Abington Heights).

Chemistry and cohesiveness also have tightened consistently since this Ursinus contingent spends lots of time together, whether at practice, on the bus to away games or in a hotel room last weekend watching the Philadelphia 76ers play.

“I just think that all of us hanging out helps us on the court,” said Hughes, who was selected as one of Ursinus’ three captains. “We know we’re connected and we’re a family pretty much. It’s fun to play with these guys and it’s just a great time all around.”

More bonding will come when the Bears hop on yet another bus for short road trips to Rosemont (Nov. 21) and Centennial Conference playmate Haverford (Nov. 26). They’ll finally open at home on Dec. 4 when No. 1 Swarthmore pays a visit to Collegeville.

“Randolph-Macon is a national program,” Small said. “We were fortunate a few years ago to be in that tier, because for a few years we were first or second in our conference and our league is obviously really, really good. We’ve come out of a haze to be pretty good these last bunch of years, but not elite the way Swat or (Johns) Hopkins have been.

“So for us, today was actually a massive step forward because it demonstrated a little bit more the gritty side of playing defense, and that’s what you’re going to lean on in tougher moments. We’ll play better offensively.”

“We’re still learning,” added McTamney, who was part of a La Salle College program that tangled with New Castle in the PIAA Class AAAA final during his sophomore season. “We’ve got a lot of young guys and we’re trying to get everyone on the same page.

“Offensively, we’re fine. We’ll get better as the year goes on.”

Yet while McTamney edged closer to reaching 1,000 career points — he departed Hitchcock Friday night just 23 shy of that memorable milestone — he shrugged off the potential accomplishment. Collective results are what drive him.

“People are telling me it’s getting close, but I’m more focused on just winning honestly,” McTamney said. “Tonight would have been a great win for us. I try not to think about all that. If it comes, it comes. If it doesn’t, it doesn’t. Eventually, it’ll come.

“It’s really not the biggest thing on my mind.”

Well, McTamney reached the 1,000-point plateau less than 24 hours later, bagging 21 of his 27 points in the second half of a decisive 92-62 win over Clarks Summit. McTamney is the 29th player in Ursinus history to score 1,000 career points.

Edwards added 18 first-half points while Gordon and Olshevski chipped in eight each as Ursinus (3-1) claimed third place. Building a 44-25 cushion 20 minutes in was one key, but the Bears also limited their adversaries to 33.9% shooting from the floor.

So, while Ursinus was back on the court in a hurry after falling to Randolph-Macon, the Bears continued to flash defense — while getting their typical offensive output.

Even after his club’s first reversal, McTamney understood the weekend’s importance while strongly hinting about the Bears’ season-long objectives.

“When you’re in the playoffs, you’re going to play Friday-Saturday,” McTamney remarked. “So, this just gets us ready to learn from what we did the night before and then fix that and then hopefully get ready for what we do tomorrow.

“We know tomorrow we’re going to come out early and fix some of the mistakes we made tonight.”