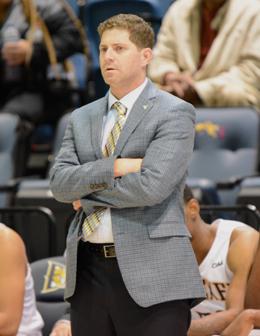 Drexel coach Zach Spiker (above) and the Dragons are hoping to crack .500 in year four. (Photo: Josh Verlin/CoBL)

Drexel finally has some continuity under Zach Spiker — after losing its top three scorers.

While the transfer of Alihan Demir and the graduation of Troy Harper and Trevor John certainly hurt, the Dragons haven’t had an offseason with this little turnover during Spiker’s tenure. Drexel has seen a combined 20 departures and six transfers in over the last three years, and such a fast rate of replacement is likely one of the main reasons the Dragons haven’t yet notched a winning season under Spiker.

With essentially the rest of last season’s squad returning alongside just two incoming freshmen, the relative lack of moving parts is a breath of fresh air for Spiker.

What the Dragons have done so far under Spiker certainly hasn’t been thrilling — a combined overall record of 35-62 (.361) — but it hasn’t been too discouraging given the lack of stability for the team. Success is relative, and Drexel has had its fair share of positives over these three seasons.

For one, the team’s conference record has improved in each of the last three seasons, going from just three conference wins in Spiker’s first year to six in his second and seven wins in Colonial Athletic Association play last season. The Dragons also set the NCAA Division I record for the largest comeback ever in a February 2018 thriller against Delaware.

Still, the lack of a winning season under Spiker’s belt through three seasons means the program will need to inch past that .500 barrier soon in order to prove its legitimacy. This past season’s 13-19 record is the best Drexel has mustered up thus far, and no Dragons team has won more than 16 games in seven seasons. Fortunately, the Dragons are set up for their best year yet thanks to the program’s newfound stability — something which makes a big difference for coaches and players alike.

“Previous years, it felt like very major jumps,” said junior forward James Butler, who transferred in from the United States Naval Academy in 2017 and started all 32 games for Drexel last season. “This year sort of flowed right into the season. We’ve got two new guys, we obviously lost three guys, but it hasn’t been as big of a change and I feel like we have a lot more chemistry on the court for the beginning of the season.”

What Butler pointed out and what others on the team noted is that there’s a different, comfortable feel around this season’s group. Freshmen aside, Drexel’s core players have all been playing together for at least a season now. That means a closer team off the court and certainly more cohesion on the court, as players have picked up on their teammates’ tendencies and can better complement one another.

“I think a tighter group off the floor allows them to understand each other and do more on the floor,” Spiker said.

This added chemistry will be especially crucial for Drexel in picking up its defensive play, an area which seriously hurt the Dragons last season. Drexel ranked in the bottom tenth of Division I teams in terms of Ken Pomeroy’s adjusted defensive efficiency statistic in 2018-19 after also-poor seasons the two years before, and often found itself struggling to keep up with opponents despite putting up above-average numbers on offense.

It’s no surprise, then, that defensive improvement has been the Dragons’ main focus leading up to this season. An extra year in Spiker’s system and working together has the team confident that, despite the legendary comeback of two seasons ago, it won’t have to plan on playing catch-up too often.

“I think we’re going to be a great defensive team,” sophomore guard Camren Wynter said. “It’s just being connected, especially on defense, moving with one another, helping each other out. You can see that everyone is for each other this year.”

“It feels like everyone has been together for a longer time so I think everyone’s a lot more comfortable and has the defensive principles down better this year,” Butler added. “Just knowing guys’ tendencies, where to move on the court, where to get passes, how they’re going to react on defense, it sort of just happens naturally.” 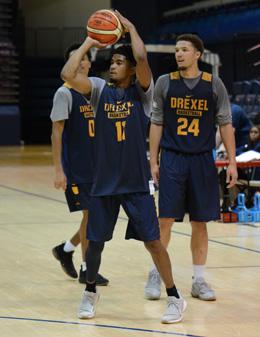 Wynter will command a pivotal leadership role for a deep Drexel squad this season, fresh off a freshman campaign in which he took home CAA Rookie of the Year honors. After leading the team in minutes last season and posting 11.3 points and 5.4 assists per game, he will be asked to take on an even larger chunk of the Dragons’ offensive load with Demir, Harper, and John gone, both scoring the ball and getting teammates involved.

Alongside him, the Dragons have a number of other proven contributors. Butler returns with his 10.3 points per game and 8.2 rebounds per game, hoping to add an outside shot to his game. Seniors Kurk Lee and Zach Walton are both back and healthy after missing most of last season due to injury; Lee scored in double-digits in both of his healthy seasons, and Walton worked his way into the starting lineup just four games into last season before his season was derailed three games later.

The extra year of experience has perhaps done even more for some of Drexel’s role players. Sophomore guard Matey Juric has drawn heavy praise from his coach and teammates as someone who took his game to a new level on both ends of the court over the offseason, and Juric will likely pick up from where he left off at the end of last season, when he played at least 27 minutes in each of the Dragons’ final four games. Fellow sophomore guard Coletrane Washington will also see the court plenty as a knockdown shooter from the outside, and freshmen T.J. Bickerstaff and Mate Okros could also garner some minutes off the bench.

“We’ve got a lot of people that have been here and know what we’re doing and played a lot of minutes,” Spiker said. “It might be a little bit different, but I think everyone’s a year older and has gone through all those experiences and I think we’re in a better position.”

It’s hard to disagree that Drexel is trending upwards as the program enters year four of the Spiker era. With a healthy mix of veteran players and a trio of promising sophomore guards led by Wynter, the Dragons have the talent, and now that there’s some continuity, the chemistry is there. But the upcoming season nevertheless will be quite the challenge.

Drexel’s non-conference schedule will be one battle after another, starting off on Tuesday night against cross-city opponent Temple and later featuring a high-major school in Rutgers as well as strong mid and low-majors such as Abilene Christian, Stephen F. Austin, UMBC, Princeton, La Salle, and South Florida.

This tough slate of games, Spiker hopes, will prime his team to perform at a high level come CAA play. Given that the CAA will only ever send one team to the NCAA Tournament each season, conference games are all that really count for Drexel, and the Dragons need to make the most of those games. Loading up the non-conference schedule is a smart approach from Spiker, as it will prime his team against tougher competition than most of the rest of the CAA.

“We step up, we play really good defense, we’re in the position to compete with anyone in the conference,” Butler said. “The conference is wide open, we can win it this year.”

With five seniors — including Butler — set to graduate after the year, a season with this little turnover might not come around for Drexel in some time. If any Spiker team has the chance to make a real run at the conference title in the near future, it’s this one.