City 6 Players Who Need to Step Up 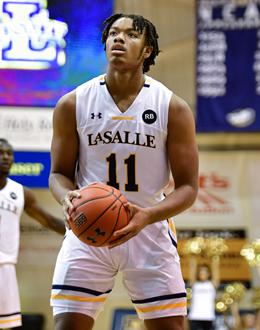 Ed Croswell (above) is one of several players in the city with raised expectations for this season. (Photo: Mark Jordan/CoBL)

With the college hoops season tipping off this week, City 6 teams are making the final tweaks to their offseason preparation and getting ready for their first games. Every team in the city lost big pieces from the 2018-19 season, and will need to find ways to fill those gaps to keep up with or exceed their expectations for this season.

Here are the players whose improvement could be most impactful for their respective teams this year:

Drexel: Camren Wynter (Soph./G)
Wynter had an outstanding freshman year for Drexel. The Long Island native averaged over 11 points per game, led the team in assists and was top 100 nationally in assist rate on his way to CAA Rookie of the Year. His contributions as a first-year player helped Zach Spiker's team stay competitive through the transfer of Tremaine Isabell and injury to Kurk Lee, and as the team's top returning scorer Wynter will be expected to shoulder a large portion of Drexel's production burden this season.

Drexel could have its best team since Spiker came to campus in 2016, and having a guy like Wynter to build around for the next three years is huge for a program that's been steadily increasing its league win total (going 7-11 in league play last year) but has yet to put together a competitive team in the CAA. But being handed the keys to Spiker's high-powered offense will be a major responsibility for the still-young Wynter. The Dragons are losing about 40 points-per-game with the departures of Alihan Demir, Troy Harper and Trevor John, and Wynter is expected to be the go-to guy for Drexel’s offense this season. He will have Kurk Lee, who averaged over double-digits in both of his healthy seasons for Drexel, joining him in the backcourt, but Drexel's success this season could hinge on how big of a step Wynter can take as a sophomore. If the Dragons can tighten up an inefficient defense and have talented supporting-cast players, like Jarvis Doles and James Butler, step up behind Wynter, they could have a better-than-projected season.

La Salle: Ed Croswell & Jared Kimbrough
If Ashley Howard and the Explorers want to continue trending in the direction they were heading in a season ago, they'll need their sophomore forwards to be able to take on larger roles and more minutes this year. La Salle went 8-10 during their 2018-19 Atlantic 10 season after losing their first ten under the first-year coach, and much of the improvement was thanks to the development of their freshman forwards as the season progressed. In his first season of college ball, Croswell (4.6 ppg, 7.0 rpg) was the most efficient offensive rebounder in the country according to KenPom, but averaged under 20 minutes per game. Kimbrough (5.0 ppg, 4.9 rpg) was also effective in a limited role, but both players will need to be able to put in more productive minutes for the Explorers to have a shot at threatening to move into the middle of the pack in the A10 standings.

Foul trouble was a common theme for La Salle in Howard's first season, and both Croswell and Kimbrough need to limit their fouls in order to stay on the floor. They averaged over a combined nine fouls per forty minutes last season, too many to expect them to be logging minutes in the high 20s or low 30s on a consistent basis.

La Salle has a strong enough backcourt core with Saul Phiri, David Beatty and Isiah Deas plus freshmen Sherif Kenney and Ayinde Hikim, and Western Kentucky grad transfer Mustapha Diagne should be an immediate factor on the boards, but the Explorers will need more from Kimbrough and Croswell to exceed their modest expectations.

Penn: Michael Wang (Soph./F)
Wang had a hot start to his freshman season in University City, putting up six double-digit performances in the non-conference season, including a 23-point outburst in a win over Miami (Fl.) in December. His production looked to be enough to help keep the Quakers on track through the loss of Ryan Betley a season ago, as a key contributor during a 10-2 start that was highlighted by a win over Villanova at the Palestra. Penn had even garnered talk of having an outside shot at an at-large tournament bid, and the defending Ivy champs were eyeing more than a league title as conference play drew closer.

But Wang couldn't find his offensive rhythm after an ankle injury suffered in a loss to Toledo just before the New Year. A Penn team that already lacked depth and struggled with the injury bug began to slide, and stumbled their way to a .500 conference record to finish the season. Wang had a few more decent performances, but was overall less effective after the calendar turned to 2019. His 12 points per game average over his first dozen games dropped to 8.5 by the time the season was over, and his rebounding efficiency dropped as well.

With Betley back healthy and Devon Goodman and Bryce Washington returning, plus a strong group of freshmen guards, Penn figures to have the backcourt weapons it needs to seriously challenge an exceptionally-strong Harvard team for the Ivy title. Outside of superstar A.J. Broderu, its frontcourt is where it might have some holes; Wang, the only returning contributor north of 6-8, finding a way to be a consistent contributor on the scoreboard and on the glass might be one of the biggest x-factors for Penn's season. 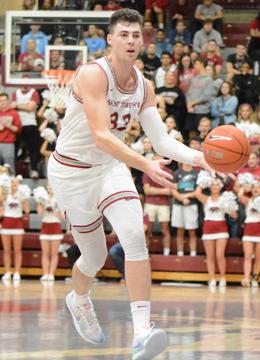 St. Joe's Taylor Funk (above) is looking to snap out of a cold sophomore season from deep. (Photo: Josh Verlin/CoBL)

Saint Joseph's: Taylor Funk (Jr./F)
This year could be a serious struggle for St. Joe's and first-year head coach Billy Lange. The Hawks lost most of their core in the coaching transition that happened this offseason, and were picked to finish only ahead of Fordham in the preseason Atlantic 10 coaches poll. Funk, a 6-9 junior forward, is the only returning starter, and will need to step up in a big way if St. Joe's hopes to make anything out of this rebuilding season.

After an impressive freshman season in 2017-18, Funk's performance declined dramatically a season ago. As a sophomore, he averaged about three fewer points-per-game, but his shooting numbers dropped dramatically –– he went from shooting 39.4 percent from 3-point range as a freshman to just 30.5 percent as a sophomore, pulling his overall shooting number down from 42.6 percent to 37.5 percent. Funk will have an even broader role on this gutted SJU team, which features three freshmen and three transfers in its top eight, and will need to find a way to surpass what he did as a freshman to help Delaware transfer Ryan Daly put a respectable product on the court for Saint Joseph's this season.

Temple: Justyn Hamilton (Jr./PF)
Everyone who was on Temple's roster last season could be a candidate here. There's a lot of pressure on senior guard Quinton Rose to assume a leadership role and do more than put the ball through the hoop, and juniors Nate Pierre-Louis and JP Moorman are ascending into captaincy roles and expected to bring their game to another level to help Temple get back to the NCAA Tournament this year. Seniors Alani Moore and Damion Moore could entirely change the dynamic if they could bring something they haven't done consistently in their first three years on North Broad.

But we're going with Hamilton for two reasons; first, Hamilton is a massively gifted athlete with maybe the biggest upside of anyone on this Temple roster. He's long, athletic and has natural basketball ability. With a 6-10 frame he can handle the ball, get to the basket, has deep range he's only scarcely demonstrated at the college level to this point (he only hit one 3-pointer a year ago on three attempts). His choosing not to redshirt his freshman year is turning out to be a disappointing decision for Temple fans, who will only be able to see him in primary minutes for two full seasons.

But it's also Temple's lack of depth in the frontcourt that makes his development so important; the Owls were often abused on the boards a season ago, and leading rebounder Ernest Aflakpui is gone. If Hamilton can develop his game on the defensive side of the ball and contribute on the glass, Temple will suddenly have a well-balanced rotation that has the potential to make serious noise this year.

Villanova - Collin Gillespie (Jr./G)
It might not be a stretch to say Villanova could have one of the best frontcourts in the country. Dhamir Cosby-Roundtree and star freshman Jeremiah Robinson-Earl will form a dangerous tandem underneath, and 6-9 sophomore Cole Swider could be ready to break out and contribute significant minutes. Where Villanova might have a weakness is with the guard corps: leading scorer Phil Booth is gone, and Jahvon Quinerly, who was expected to be the one to step up next to Gillespie this year and add more firepower to the backcourt, transferred this off-season.

Gillespie is Nova's leading returning scorer (10.9 ppg, 2.8 apg), and will need to step up in the absence of Booth if Jay Wright's team expects to do more than compete for the Big East. Five-star freshman Bryan Antoine might be one of the top rookies in the conference and a viable two-guard option, but an injury will likely keep him sidelined until the start of conference play, if not longer. A junior out of Archbishop Wood, Gillespie will be the one charged with running Villanova's offense and finding a way to average more than the close-to 11 points and three assists he did last year. He will get more minutes, and expect to see his efficiency ratings improve into his third year (his field-goal percentage dropped from 45 percent to under 41 percent from his freshman to sophomore seasons). That'll probably have to be the case if Villanova expects to remain top dog in the Big East.