(Editor's Note: CoBL is "back." While the site won't be the same content machine that it was in its heyday, I've put the site back online and will be posting stories semi-frequently during the season. To help support myself and CoBL, please subscribe to my Patreon page; it's only $3/month to support local hoops coverage. With enough subscriptions, I'll start paying other writers to contribute once again.)

The 2019-20 college hoops season is (unofficially) off and running.

Found some time this weekend to watch two of the City 6: Villanova, in an exhibition game against Southern Cal on Friday night, and then Penn, on Saturday in its annual Red & Blue scrimmage.

Here are some thoughts on both teams: 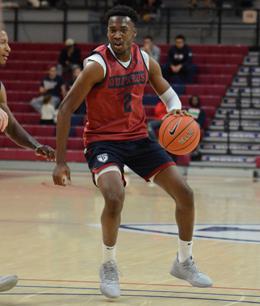 Penn freshman Jonah Charles (above) is one of several new sharpshooters on the Quaker roster. (Photo: Josh Verlin/CoBL)

It’s no secret that Penn boss Steve Donahue likes to fire away from deep.

“When we played well last year, it was when [then-freshmen] Michael [Wang] and Bryce [Washington] were shooting the ball and scoring the ball,” Donahue said. “We ran out of that for whatever reason and we didn’t have the ability to score enough.”

Five different players hit multiple 3-pointers in the Red & Blue scrimmages, though the Quakers shot only 19-of-60 (31.6%) combined. However, the players who are most likely to take those shots during the regular season generally had good days from deep. Keep in mind, the 3-point arc is newly deeper this year, pushed back from 20 feet, 9 inches to 22 feet, 1 ¾ inches, matching the international professional distance.

Freshman wing Jonah Charles hit four straight triples in the second half, including back-to-back 4-point plays, to finish with 14 points, adding in four assists and a turnover. Sophomore Bryce Washington was 3-of-8 from deep; Michael Wang hit 2-of-3, and sophomore Griffin Ryan hit all three of his attempts. The only player who wasn't hitting as he normally does was fourth-year junior wing Ryan Betley, who was 0-for-6 from 3 in his first "unofficial" competition since tearing his patellar tendon five minutes into the 2018-19 season.

One returning Quaker whose shot looked much-improved from the past was junior wing Eddie Scott. Scott, who came to Penn two years ago out of Gonzaga (Md.) College HS as a slashing scorer, looked reinvented in hitting four 3-pointers on nine attempts, one of which was an end-of-half chuck from beyond midcourt. He finished with 18 points (on 12 shots), four assists, one steal and one turnover in 34 minutes.

After playing in only 28 games over his first two seasons, Scott could become a regular part of the rotation as an upperclassman if those shooting trends continue.

“What he’s done is he’s done a good job of understanding when to put the ball on the floor, when to cut, and he’s become a very good standstill shooter,” Donahue said. “He’s got a chance to help us, and that’s part of the evaluation over the next couple weeks.”

There were certainly plenty of positives to takeaway from Penn’s scrimmage if you’re a Quaker’s fan, but perhaps the biggest eye-opener of the entire scrimmage was the performance of junior big man Mark Jackson. The 7-3 Utah native had always been intriguing ever since he committed to the Quakers before graduating from East High School in 2015, taking a two-year Mormon mission before enrolling at Penn in the fall of 2017.

Jackson’s first two years on campus, it looked like he might not be more than a practice body, as his large frame lacked the mobility and muscle tone necessary to compete in the modern, athletic Ivy League. But he was a whole new man on Saturday, playing 19 minutes and finishing with 13 points and six rebounds. He got most of his production on post-up situations, showing off the ability to finish over either shoulder and put the ball on the floor once or twice, and also picked up a couple assists.

“He’s done a great job with his body, he’s worked really hard on his athleticism, on his own, with his strength coach...he’s done everything he can to make himself better,” Donahue said. “Today, that was probably the best he’s shown, real confident finishing. And we run the ball through the big so much so that’s another hurdle for kids like him. I thought he handled the ball well, made great decisions.”

Whether or not Jackson can actually make a real impact on the court this year for a Quakers team with Ivy title aspirations remains to be seen. Last year, he only appeared in six games, playing a total of 10 minutes and scoring three points.

Part of it depends on roster flexibility. The Quakers’ primary lineup involves senior forward A.J. Brodeur at the ‘5’, with four perimeter players around him. That would put Jackson in competition for minutes as the backup ‘5’ with junior Jarrod Simmons (1.7 ppg, 2.0 rpg) and freshman Max Lorca-Lloyd, who picked Penn over high-major offers. If the Quakers go big with Brodeur at the ‘4’ and find success, that opens up more minutes for one or more of Donahue’s bigs.

“We’ve got to [figure out], over the next couple weeks, does (Jackson) jump in there and fight for playing time, does he make us a better team? I’m not sure just yet,” Donahue said. “I think the part we also have to work on is do we just move AJ over to the ‘4’, play him as one of our perimeter four guys...if one of those [big] guys step up and play well, that’s what we’ll probably do. If the perimeter players are playing as good as anybody, then we’ll probably decide to keep AJ at the ‘5’.”

-- Freshman forward Max Martz (ankle) and guard Jordan Dingle (quad) both sat out with injuries, though both are expected back before the beginning of the season. Though Martz was in a boot, Dingle was in uniform and even shot around a bit after the scrimmage.

-- Bryce Washington, who averaged 7.5 ppg as a freshman, mostly as a 3-point threat, looks like he's upped his offensive game. The 6-4 sophomore was taking the ball to the hoop, finishing in crafty ways around the bucket, finishing with a scrimmage-high 19 points on 7-of-13 shooting. He could be in for a breakout sophomore year.

There’s no doubt that, on average, Villanova’s roster and lineups are going to be amongst the bigger in the country. Jay Wright only has one scholarship player on the roster under 6-foot-4 –– junior point Collin Gillespie, who’s 6-3 –– and seven wings and bigs who are between 6-7 and 6-9, plus 6-5 guards Brian Antoine and Chris Arcidiacono, both freshmen.

Without Gillespie (broken nose), 6-4 freshman Justin Moore handled point guard duties, alongside four of those wings and bigs. The rest of the starting lineup: 6-7 Jermaine Samuels, 6-8 Saddiq Bey, 6-9 Dhamir Cosby-Roundtree and 6-9 Jeremiah Robinson-Earl. It’s a lot of length out there at one time, and as they learn to play the style of defense Wright demands, there’s a chance this could be one of his best squads yet on that side of the ball –– and they all should have two years together.

However, without Gillespie, it was tough to get a real feel for the Villanova offense. Moore, the No. 54 prospect in the ESPN 100 for 2019, is more of a scoring guard than a point guard, and he didn’t do much with the ball, failing to register an assist on the night; as a team, the Wildcats only collected seven assists, five of which were from Samuels. With Antoine out indefinitely with a shoulder injury, it looks like Gillespie’s going to need to play massive minutes at the ‘1’ for ‘Nova, especially if Wright wants to get any sort of drive-and-kick game going offensively.

Considering it was a preseason scrimmage more than three weeks removed from the beginning of the regular season, and with a shortened roster to begin with, I assumed Wright would go to his bench more often than usual. After all, why not see what he had in his freshmen –– including local products Chris Arcidiacono (Neshaminy HS/Perkiomen School) and Eric Dixon (Abington HS)?

Instead, despite not having Gillespie or Antoine, Wright stuck with what was ostensibly a seven-man rotation. Two freshmen, McDonald’s All-American forward Robinson-Earl and combo guard Moore, both started and played 36 and 35 minutes, respectively. Bey got 36 minutes as well, and junior wing Samuels got 28. Cosby-Roundtree (22 minutes), sophomore stretch forward Cole Swider (19 minutes) and sophomore wing Brandon Slater (15 minutes) ate up the rest of the court time.

Arcidiacono, the younger brother of former ‘Nova standout Ryan Arcidiacono, played only five minutes, missing his only shot attempt, a 3-pointer. Dixon, who had four dominant year for the Galloping Ghosts, winning PA State Player of the Year as a senior, only saw four minutes, a foul his only impact on the box score.

Wright typically only sticks to a 7-8 man rotation, so it wouldn’t be out-of-character if a few of the 11 scholarship players on the ‘Nova roster spend most of the season watching from the bench. If this game is any indication of the regular season, it might be another year before Arcidiadono and Dixon get a chance to really make an impact for the Wildcats.

Other Notes
-- Freshman big man Jeremiah Robinson-Earl looks like the real deal. The All-American finished with 20 points and nine rebounds, going 10-of-14 from inside the arc though missing his only 3-point attempt. Like Omari Spellman before him, Robinson-Earl looks ready to step into a starting spot at the '5' man and could be playing in the NBA next year.