City 6 Preview: Demir ready for even bigger role at DU 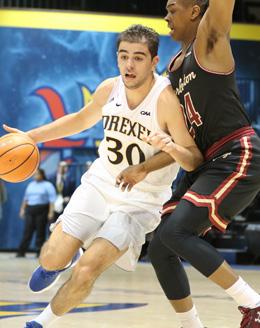 Alihan Demir (above) was a double-digit scorer in his first season at Drexel last year. (Photo: Josh Verlin/CoBL)

Drexel head coach Zach Spiker isn’t quite sure what his rotation for the upcoming season will be just yet, but two things are for certain: Kurk Lee Jr. will be the starting point guard for the third consecutive year, and Alihan Demir will play an even bigger role from last season.

“The timing of the year, and the flow and our makeup, we’re expecting big things out of Alihan this year,” Spiker said.

Bursting onto the scene last season as a transfer from Central Wyoming (Junior) College, Demir wasn’t allowed to play in the first five games of the year due to participating in an unsanctioned summer league overseas.

Demir was giving quality production off the bench and thanks to a couple of injuries, he was placed into the starting lineup for the first time last December 7 against La Salle. He remained a starter for the rest of the season up until they bowed out of the CAA tournament quarterfinals to eventual champions College of Charleston.

Though his 31.3 mpg was the fourth-highest on the team last year, that number is certainly only going to go up this season as more weight will be placed on his shoulders.

After a 13-20 season last year, 60 percent of Drexel’s starting lineup for the majority of last season is gone, including two of the Dragons’ top four scorers. Guard Tramaine Isabell (21 ppg) transferred to St. Louis and guard Sammy Mojica (11.1 ppg) graduated alongside defensive stalwart and center Austin Williams. Subtract those two and that leaves Lee (12.4) and Demir (10.7) as the top two returning scorers on the team.

Though Demir started all of his games at the ‘4’ last season, he is a positionless basketball player, Drexel’s Swiss Army Knife, able to plug into any position on the court.

“I can take minutes in the three, four and five,” Demir said. “It’s better for me because coaches can put me in anywhere they want and I feel like I can do at least an okay job at any position that they will put me in.”

A native of Turkey, Demir brings a European style of play to the table where even as a 6-foot-9 forward, he’s able to handle the ball and shoot from the perimeter.

“I learned I’ve gotta stay on my feet with him because he’ll fake, he’ll twist, he’ll head fake,” Butler said. “I’m still not the best at guarding him, but I’ve learned a little bit.”

“I’m not a shot blocker like Stretch (Williams) because he has long arms,” Demir said with a laugh. “But I’m not trying to get pushed around in the post and on rebounds, I did most of the things that I could’ve done to fill his spot inside this offseason.”

Last year, Demir came into camp weighing in at 220 and as the year went on, the toll of a Division I schedule came into play by the end of the year.

“I think his body kind of wore down as the season went on,” Spiker said. “We’ve got to get him back in that spot.”

Coming into camp this season, Demir is listed at 233 lbs. after working on his body in the offseason, lifting weights four times a week as well as running five times a week.

Defenses tended to focus on stopping the explosive guard combo of Lee and Isabell as well as Williams on the low block last season, leaving Demir with some open shots. Now, he’ll more than likely be a priority for opposing defenses to stop this season.

“As Tramane and Stretch are leaving, I need to take on a bigger responsibility,” Demir said. “Coaches said I’ll get the ball more, I’ll distribute more too, I think I’ll put up better numbers, hopefully.”