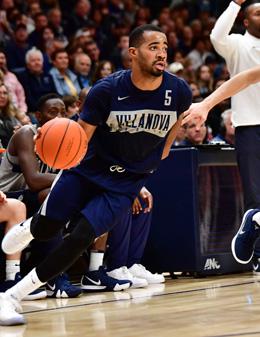 Phil Booth (above) looked like he was ready to take the scoring reins at Villanova's Blue/White Scrimmage on Saturday. (Photo: Mark Jordan/CoBL)

Seniors play like it
Phil Booth has shown flashes of his ability to carry an offense in the past. He had two 20-point games last season, a career-high 21 points against Xavier and 20 points against Gonzaga. The only other 20-point game of his career was when he went 6-of-7 from the floor for 20 points in the national championship game against North Carolina in 2016.

However, the 6-foot-3 guard, who averaged 10 points per game last season, has been praised more for his unselfishness through the first four years of his college career than his scoring prowess. Booth was more often recognized for things liking diving on a loose ball or taking a charge.

After the departure of four double-digit scorers and 70 percent of the team’s scoring, Booth is a player Villanova coach Jay Wright is looking for to be a little more selfish on the offensive end in 2018-19. Booth scored 36 points and went 7-for-14 from behind the 3-point arc on Saturday. Along with a consistent shooting stroke, he also showed off an assertiveness that he had only displayed at times in seasons past.

“He’s been such a great player for us because he’s willing to play off the ball and willing to let other people get shots and not complain, do the little things,” Wright said. “Whereas I need him, we need him this year to be aggressive all the time. I thought he did a good job of that today.”

Along with Booth, redshirt-senior Eric Paschall (10.6 ppg) showed he’s ready for an expanded offensive role. As a freshman at Fordham in 2014-15, Paschall averaged 15.9 ppg. Like Booth, Paschall sacrificed a bit of his game offensively during the past two seasons to fit with the Wildcats’ other talented players.

Eric Paschall with a great hustle play to get Collin Gillespie a layup before the end of the period. pic.twitter.com/nB4oBKgclz

Paschall scored 21 points and grabbed 11 rebounds on Saturday. Most impressive was his outside shooting as he went 5-of-10 from 3-point range. The 6-foot-8 forward started last season 1-for-25 from behind the arc before shooting 46 percent from deep in the Wildcats’ final 25 games.

“I learned Eric’s stepping into that leadership role well, that go-to role, so is Booth,” Wright said. -- Owen McCue

Distance shooting a little iffy
It’s no stretch to say that Villanova has relied heavily upon the 3-point shot during its recent run of dominance. With Wright’s four-out offense that typically features no fewer than three players on the floor who have earned the “knockdown” label -- last year’s national champions could get treys from all five starters with regularity -- this year’s Wildcats feature the fewest proven shooters that Wright’s had in some time.

And whether it was the new lights in the renovated Finneran Pavilion, a bit of nerves or a mix of both, Villanova’s 3-point shooting did leave something to be desired early on, as the Wildcats were just 4-of-28 (14.3 percent) combined in the first two eight-minute mini games. Collin Gillespie missed all four of his attempts, as did Jahvon Quinerly; Booth and Paschall both were 1-for-4.

“Any time you put a crowd in the arena, get the lights on, put referees out there, any time you do that, for whatever reason, there’s game pressure that affects players and coaches,” Wright said. “So that’s part of why we do this, it’s a good experience.”

But the third, fourth and fifth games saw the shots start to drop. Freshman Brandon Slater hit his final three attempts of the day; Gillespie hit three of his last five, Paschall knocked down four of six and Booth hit six of his last nine.

Phil Booth to Brandon Slater for a corner 3. The lefty has hit his last two from deep. pic.twitter.com/IqVTtvTYG3 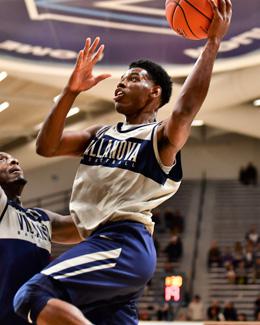 Freshman Brandon Slater (above) was one of several young wings who played well at the Blue/White scrimmage. (Photo: Mark Jordan/CoBL)

Rotation not much clearer
After Saturday’s scrimmage, Wright said he has a good idea of where two players will fit in the rotation this season: Booth and Paschall.

The only other returners from last year’s team are sophomores Gillespie (Archbishop Wood), Dhamir Cosby-Roundtree (Neumann-Goretti) and Jermaine Samuels. Cosby-Roundtree and Gillespie averaged more than 11 minutes per game last season with Gillespie seeing extended time when Booth went out with an injury. Samuels saw some time early, but a hand injury limited him to just 25 games, and he fell out of the rotation during the final two months of the season.

Redshirt-sophomore Dylan Painter was back after redshirting last season. Painter is a 6-foot-11 big man who can step outside and shoot the three. He and Cosby-Roundtree are the only true big men on this year’s squad, so both should see some time with Cosby-Roundtree likely the favorite to see the most minutes up front due to his defense and rebounding.

Then there are the four freshman. Quinerly, Slater and Cole Swider showed off their offensive potential on Saturday, and Saddiq Bey was aggressive on the glass and the defensive end. The quartet also flashed their inexperience. Quinerly was the most explosive with 19 points. He also turned the ball over several times. Swider and Slater finished with 15 and 13 points, respectively, but it took them a little while to get going. Wright was not quite impressed by the defensive performance of the group as a whole.

Samuels might be the most interesting piece to the puzzle when it comes to the rotation. As one of the primary ballhandlers and one of the only true bigs, Gillespie and Cosby-Roundtree clearly fit into the mix. Samuels, however, was overshadowed offensively by Swider, Quinerly and Slater on Saturday. If he carves out a role, it will most likely be for something else. His rebounding impressed as he grabbed eight boards, including two on the offensive end. He also tallied four assists.

There wasn’t much separation between the freshman and sophomore classes on Saturday, and the battle for minutes will likely continue into the season. Wright said he plans on playing around with lineups and seeing how they fit together. Players were flipping their reversible jerseys and switching teams in between the mini games on Saturday.

“Besides our two seniors, we don’t have anybody right now that you could define where they’re going to be big-picture yet, but you see a lot of guys with a lot of potential,” Wright said. “It’s going to be a matter, for this season, of what’s each guy’s path. You could see a guy this year might start, a young guy; next year, one of our other young guys might surpass him.”

“We’ve got to really see who can pick things up as quickly as possible, and those are the guys who are going to play a lot early, and we’re always going to be evaluating how guys are coming along during the season.” -- Owen McCue