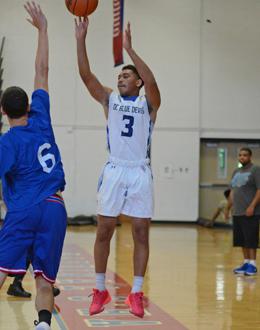 Jared Bynum (above, last summer) will have to step right into a big role at St. Joe's. (Photo: Josh Verlin/CoBL)

~~
(Ed. Note: This article is part of our 2018-19 season coverage, which will run for the six weeks preceding the first official games of the year on Nov. 6. To access all of our high school and college preview content for this season, click here.)

David Beatty, La Salle
Ashley Howard’s rebuilding job at La Salle got a nice kick-start just before practices began last month, with the news that this Philly native and Imhotep charter grad would be immediately eligible after transferring in from South Carolina this spring. A super-athletic 6-2 guard with scoring ability to score, Beatty spent his first two years of high school ball at Archbishop Carroll, before going to St. Benedict’s (N.J.) for a year and then spending his final year of high school at the Philly Public League powerhouse Panthers. In his only year at USC, Beatty played 11.8 minutes in 29 games, averaging 3.0 ppg and 1.0 rpg while shooting just 10-of-53 (18.9 percent) from deep and 25.4 percent overall.

Don’t let those poor shooting numbers fool you, however. Beatty is a threat to be a high-level scorer in the Atlantic 10, and with what’s sure to be a bigger role for the Explorers, he shouldn’t need to feel rushed or forced to produce in a more limited run, which often drives shooting percentages down for freshmen struggling to find a consistent role. In a backcourt that already features several talented combo guards like Traci Carter, Jamir Moultrie and Cheddi Mosely, Beatty’s ability to serve as a pure scorer on the wings could do La Salle well. Carter, by the way, could very well be on this list; the former Marquette guard averaged 5.2 ppg and 4.4 apg in 41 games for the Golden Eagles, but he’s technically in his second year at La Salle, so we went with Beatty.

Jared Bynum, Saint Joseph’s
Bynum’s commitment to the Hawks last March was generally seen as a bit of a steal for St. Joe’s, the Georgetown Prep guard taking himself off the market before his final AAU season, one which almost surely would seen some high-major programs checking out the undersized-yet-productive lead guard. Playing with the DC Blue Devils last summer, Bynum put together an impressive offseason, scoring from all three levels and getting his teammates plenty of open shots, playing with a college-ready attitude and intensity.

Now the only freshman on a St. Joe’s roster that’s ready to compete with the top of the Atlantic 10, the 5-9 Bynum is in the mix not only to play major minutes but to start from the get-go alongside fourth-year junior Lamarr Kimble, creating a similar dual-combo-guard situation to the backcourt of Kimble & Newkirk of the last couple years. Even if he comes off the bench, Bynum will need to be a steady on-ball presence and scoring option for a team that’s only got 10 scholarship bodies available this season, one of whom (USF graduate transfer Troy Holston Jr.) is coming off his second major knee injury in three years. In practices so far, Bynum has certainly looked ready; we’ll see if that continues when the lights really come on.

Joe Cremo, Villanova
The Wildcats were in need of an infusion of talent and experience this offseason following the departure of four starters to the NBA Draft. And Jay Wright brought in arguably the top one-year rental around in Cremo, a native of upstate New York who played in 100 games (68 starts) over three seasons at Albany, averaging a career-best 17.8 ppg as a junior to go along with 4.1 rebounds and 3.8 assists per game, putting him on the American East’s all-conference first team. Kansas, Texas and Creighton had been among the numerous high-major programs after Cremo once he decided to use his final year of eligibility elsewhere, but the winners of two of the last three national champions got their prize yet again.

In Cremo, Wright picks up a guard who knocked down 45.8 percent of his 3-pointers and who excels in catch-and-shoot situations, which will fit in just fine in a program that loves to drive, kick and find the best shot possible, often a wide-open triple. Perhaps more importantly than Cremo’s ability to shoot will be the fact he gives the Wildcats a third senior on the roster, and though he doesn’t have as much time in the Villanova ethos as Phil Booth or Eric Paschall, the ‘Nova staff is banking on the fact that Cremo already understands what they want out of him and can slide right into the mix without issue. It remains to be seen just how much Cremo will produce at this level, but Villanova needs him to be a double-digit scorer who isn’t a defensive liability and who will help develop the underclassmen on the roster to lead the way next year.

Jahvon Quinerly, Villanova
Speaking of Villanova underclassmen, Wright and his staff brought in a four-man freshman class, all at least four-star prospects, three of whom were consensus top-60 prospects. And while Brandon Slater, Cole Swider and Saddiq Bey are all good enough to crack the rotation right off the bat, none of them will have the anticipation or expectations of Quinerly, a Hudson Catholic (N.J.) prospect and one of the more visible guards on the recruiting circuit the last few years. Ever since his freshman offseason, when he was part of a Sports U Team IZOD starting lineup known as the ‘Fab 5’, Quinerly has been a must-see lead guard prospect, a wiry 6-2 ball-handler who played with the utmost confidence, helping popularize the “JellyFam” movement based around a flashy, wrist-twisting layup.

It’s also worth noting that Quinerly begins his time at Villanova with the spectre of a black cloud hovering in the distance. He was formerly committed to Arizona before the Wildcats’ involvement in the ongoing FBI investigation & trial into illicit money in college basketball; though Quinerly himself was not named in the suit, but was hinted at in connection with former U of A assistant Book Richardson, who was fired from the program due to his involvement with the scandal. While at this point it does not look like the investigation will affect Quinerly’s eligibility at Villanova, there’s always a chance that could change. Assuming it doesn’t, Quinerly will be a major part of the VU backcourt, splitting minutes with Collin Gillespie at point but also able to play off the ball as a three-level wing scorer.

Zach Walton, Drexel
While there have been some electric guards on the roster in Zach Spiker’s first two seasons, including Kurk Lee Jr. and Tramaine Isabell, the Dragons’ boss hasn’t really had a true scoring ‘3’ man to work with; redshirt sophomore Sam Green, more of a combo forward, played the small forward position a year ago, but he’s not quite the 3-point shooter Spiker needs out of his third guard. That’s where Walton fits in, and he could provide a big boost for an offense that needs to replace the 21 ppg of Isabell, plus another double-digit scorer in graduated senior Sammy Mojica.

A 6-6 wing, Walton comes to Drexel by way of Edmonds (Wash.) CC, for whom he averaged 20.8 ppg and 9.4 rpg as a sophomore, shooting 54.7 percent from the floor and 41.8 percent from 3-point range. Both of those numbers would be welcome figures on a team that shot just 32.5 percent from 3-point range a year ago, and will also need to replace its top two rebounders in big man Austin Williams and Isabell. Just how much he’ll be able to produce is still very much to be determined, but early returns make it seem like he’ll be getting plenty of opportunities off the bat; he’s got a quick, easy release on his jumper to suggest his Edmonds years were no fluke, and has the physicality to play big minutes right away.

Camren Wynter, Drexel
With six first-year Dragons on the Drexel roster, there was no way we could include just one on this list. Wynter, one of four freshmen on the squad and one of three rookie guards, is the most college-ready, and could challenge for starters’ minutes at some point this season. A 6-2 product of Holy Trinity HS (N.Y.) and then a post-grad year at DME Academy (Fla.), Wynter averaged more than 20 ppg in high school and north of 14 points and six assists at prep school, and it’s his ability to be both a scorer and a facilitator with good length and defensive instincts that has the Dragons’ staff excited.

Assuming Drexel starts senior Troy Harper and junior Kurk Lee Jr. in the backcourt, then Wynter could very well be the first guard off the bench. In the one game Drexel played in Australia which was taped, Wynter showcased a few scoring moves, including a confident floater and a capable 3-point shot. If he can prove to be a reliable defender, Wynter’s minutes could approach starters’ territory, as that’s the team’s biggest area for improvement if they want to start heading up the CAA standings this year.