City 6 Preview: Players who need to step up 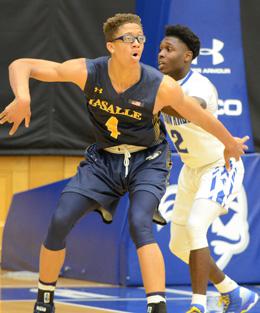 Miles Brookins (above) will have to be the man in the middle for La Salle this season. (Photo: Josh Verlin/CoBL)

Miles Brookins -- Soph./La Salle
Brookins is actually one of two Mater Dei (Cali.) products who will be expected to produce in the Big 5 this season, as Penn freshman forward Michael Wang looks ready to jump right into the Quakers rotation. But Wang certainly won’t fill as big a role as Brookins, who should start in the middle for an Explorers bunch that’s got a surprisingly high ceiling for a team coming off a 13-19 campaign and featuring a first-year head coach. The La Salle backcourt is indeed solid for Ashley Howard, who got South Carolina transfer David Beatty immediately eligible to go along with Marquette transfer Traci Carter and Boston U grad transfer Cheddi Mosely, as well as a few hanger-ons from the John Giannini era.

But up front, there isn’t much in terms of proven talent. Tony Washington had manned the middle the past three years, though Brookins played in 29 games last year with one start, averaging 3.8 ppg and 1.9 rpg while making nearly 60 percent of his shots. The 6-10 forward had a college-ready body a year ago and shouldn’t have much difficulty with the physicality of the Atlantic 10; he also won’t need to do anything special, with the talent level of the guards on the roster, simply running rim-to-run and grabbing boards will be plenty. But without much size on the wing, and with only a pair of true freshmen (Ed Croswell & Jared Kimbrough) plus a very raw sophomore (Cian Sullivan) otherwise up front, Brookins will need to stay out of foul trouble and stay on the court.

Charlie Brown -- R-Soph./Saint Joseph’s
It’s not that Brown’s going to spend more time on the court this season -- one year removed from a fractured wrist that cost him the 2017-18 season -- than he did the year prior to it, when he started 30 out of 31 games and saw an averaged of 34.2 minutes per game on an injury-ravaged squad. In fact, given the Hawks’ depth this year, he should probably play slightly fewer minutes, but that’s besides the point. When Brown averaged 12.8 ppg and 5.0 rpg back in 2016-17, he was typically serving as the second, third or fourth option in the offense, depending on who else was healthy at the time. He shot 38.4 percent from 3-point range but only 37.5 overall, with 33 assists and 36 turnovers on the year.

Now that he’s finally over the lingering fracture, Brown retakes the court for a St. Joe’s squad that graduated its two leading scorers in Shavar Newkirk (17.6 ppg) and James Demery (16.9 ppg), with 6-8 sophomore forward Taylor Funk as the team’s leading returning scorer (11.8 ppg); redshirt junior Lamarr Kimble averaged 15.5 ppg in 2016-17 but missed all but one game last season after fracturing his foot twice in a 10-month span. And it’s time now for Brown to rise up and become the high-scoring wing he was recruited to be out of George Washington (Pa.) and St. Thomas More (Conn.). The 6-6 wing has proven he can shoot from deep, but now he’ll need to show a more efficient overall game as well as improved play-making ability to take pressure off Kimble and Funk if the Hawks are going to play up to capacity. 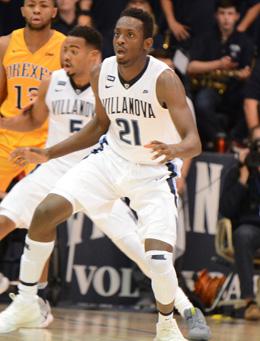 Dhamir Cosby-Roundtree (above) is one of two Philly sophomores who will have to step up for Villanova. (Photo: Josh Verlin/CoBL)

Dhamir Cosby-Roundtree -- Soph./Villanova
As the 2017-18 season progressed, Jay Wright got tighter and tighter with his rotation, so it’s somewhat easy to forget that there were times in the early and middle portions of the year that Cosby-Roundtree, a 6-9 forward out of Neumann-Goretti, looked like he could step in and play major minutes should Omari Spellman get hurt; there was an 11-point, four-rebound effort in 12 minutes against Providence, eight points and six boards in 17 minutes against Nicholls State, six points and six boards in 23 minutes against UConn. Spellman stayed healthy and productive, and so as ‘Nova’s games got more and more meaningful, Cosby-Roundtree’s minutes sloped downward, to the point where he played just nine minutes in the Final Four with no points and one rebound. For the season, he averaged 3.1 ppg and 2.4 rpg in 11.3 mpg, shooting 77.9 percent (53-of-68) from the floor, almost entirely on dunks and layups.

Spellman’s gone now, picked No. 30 in the NBA Draft by the Atlanta Hawks, and so there’s plenty of space up front for Cosby-Roundtree to easily build on his production from a year ago. He’s got the length and motor to be a productive two-way player in the Big East, even if he lacks elite size for a ‘5’ and is still working on the polished offensive ability needed to play the ‘4’ in Wright’s system. The Wildcats shouldn’t need him to play 30 minutes a game or anything like that this year, as they’re capable of going small-ball with Paschall at the ‘5’ and someone like 6-8 freshman Cole Swider at the ‘4’, but a healthy dose of Cosby-Roundtree should help them defensively and in rebounding battles against the more physical teams around.

Alihan Demir -- Jr./Drexel
Demir was certainly the pleasant surprise on the Drexel roster last year, and perhaps the most unexpected double-digit scorer in the city a year ago. A 6-8 Turkish forward who spent his first year of college at Central Wyoming, a junior college, Demir sat out the first five games of his junior season but then jumped right into a major role, playing 34 minutes in his debut and never fewer than 21 in any game the rest of the season. After scoring in double figures just once in his first five outings, he did it 11 times in the next 12 games, finishing the year fourth on the team in scoring (10.7 ppg) and third in rebounding (5.4 rpg), making 48 percent from the floor, 36.5 percent of his 3-pointers and 75 percent of his foul shots.

With last year’s leading scorer Tramaine Isabell (21.0 ppg) deciding to take advantage of the graduate transfer rule and use his final year of eligibility at Saint Louis, the Dragons need someone to become their go-to offensive option, and they also need some major leadership following the graduation of four other seniors. Ultimately, Demir is in the best position to emerge as a primary option for the Dragons, with his inside-out scoring ability, combined with good passing instincts and overall basketball IQ and maturity. He might not necessarily have to lead them in scoring, but he should be the player that head coach Zach Spiker just can’t take off the floor.

Nate Pierre-Louis -- Soph./Temple
There’s no doubt that Temple’s mid-season resurgence last season -- when the Owls won seven of eight to look like they could actually make a late run at an at-large bid, before losses in four of five ended that line of thinking -- coincided with Pierre-Louis’ insertion into the rotation in late December, and his becoming an effective two-way player not long afterwards. The Roselle Catholic (N.J.) product was a sought-after recruit but spent most of his first two months of college hoops either riding the pine or getting spare minutes, before bursting out for 11 points and five rebounds (plus three steals) in 22 minutes off the bench against Tulane on Dec. 28. He didn’t play fewer than a dozen minutes in any game there on out, scoring in double figures on 11 separate occasions with a season-high 23-point outing in 36 minutes against Memphis on Jan. 13, his only start of the season. In that game and the 12 that followed, he averaged 10.1 ppg and 3.5 apg in just over 21 minutes,

A bouncy 6-4 combo guard, Pierre-Louis brought a noticeable burst of energy to an Owls squad that had been missing a spark; his intensity, especially on the defensive end, helped flip the switch at a time where it looked like Temple might flounder its way through 2017-18. But now as a sophomore and almost certainly a starter, Pierre-Louis will have to be more than just a change-of-pace energy guy; he’s going to have to set that tone for 25-30 minutes per game, and he’ll have to do it every single night. He won’t necessarily have to be a leading scorer with Shizz Alston and Quinton Rose around, but he can take pressure off them defensively and provide another weapon for the Owls’ offense.

Jarrod Simmons -- Soph./Penn
The Penn frontcourt is quite strong, with A.J. Brodeur (13.1 ppg, 7.2 rpg) and Max Rothschild (7.5 ppg, 5.7 rpg) both back in starting roles from a year ago, and sure to eat up plenty of minutes for the defending Ivy League champs. But that doesn’t mean there isn’t room for Simmons to grow into a much larger role than the one he occupied a year ago, where he flashed some impressive moments in fairly limited action. A 6-8 forward from Crescent (Pa.) and graduate of Moon High before doing a prep year at Cushing Academy (Mass.), Simmons averaged 2.4 ppg and 1.7 rpg in 6.1 minutes (24 games).

In the three games where he played double-figure minutes, however, Simmons averaged 12.3 ppg and 5.7 rpg, hitting 8-of-14 from the floor and two of four from deep, plus 15-of-17 from the foul line. It’s true those numbers didn’t come against the highest level of competition (D-Is Delaware State and Howard plus small-school PSU-Brandywine) but they’re encouraging signs of what he can do with opportunity. On the court, the mobile, bouncy forward gets up and down the court in a hurry and he’s got the ability to stretch the floor when open, hitting 5-of-15 (.333) overall from deep as a freshman. There’s no reason Simmons can’t get on the court for around 15 mpg this year, and he should be able to easily triple his scoring and rebounding numbers from a year ago. If he can, Penn’s frontcourt should be even better than a year ago.