Syracuse proves too tempting to pass up for John Bol Ajak 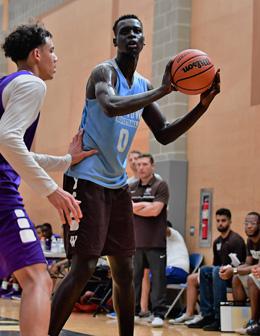 Jon Bol Ajak (above) committed to play at Syracuse University on Tuesday after visiting the Orange this weekend. (Photo: Mark Jordan/CoBL)

John Bol Ajak walked out of the gym unaware what was waiting for him.

Three years ago, Ajak was a freshman at the Church Farm School, in the United States for the first time after living in Kenya for the majority of his first 13 years. Church Farm coach Marc Turner decided to use a hands-on approach to teach the young big man what a winter climate is like.

“Coach Turner was out there with a snowball in his hand, and hit me in the face and was like, ‘Welcome to America,’” said Ajak, who was born in South Sudan but fled to Kenya when he was less than a year old. “I’ll never forget that.”

It’s a good thing the 6-foot-10 forward doesn’t mind the snow, as he’ll likely see a lot of it over the next several years. After traveling to upstate New York this past weekend for an official visit to Syracuse, Ajak made his commitment to the Orange on Tuesday afternoon.

“It’s part of the challenge, you want to be able to experience different stuff,” Ajak said. “I’ve experienced the hot weather for 13 years of my life. I appreciate the seasons, so it doesn’t affect my decision at all.

“It was all about basketball to me,” he added.

Ajak, who left Church Farm after three years to spend his senior season at the Westtown School, came back from his visit around 12:30 p.m. Sunday afternoon and said he gave himself a 24-hour rule to think about his decision before he made any commitment.

It wasn’t difficult to take his mind off things as he headed straight to play in a pair of games for Westtown at an offseason event. Following the slate of games, Ajak had a chat with Westtown head coach Seth Berger on Sunday night, which confirmed that Syracuse was the right fit.

The only difficult part left was figuring out how to tell Saint Joseph’s coach Phil Martelli that he wasn’t going to be a Hawk. Martelli had recruited Ajak since his freshman year, and Ajak said the two had developed a strong relationship.

“I had to call him first, explain myself, say I’m going to Syracuse,” Ajak said. “He respected it, he made it easy for me, and then I called Syracuse.”

Ajak joins a historic program at Syracuse and will play for a Hall of Fame coach in Jim Boeheim. In 42 years at the school, Boeheim has 926 wins, 29 NCAA Tournament appearances, five Final Fours and an NCAA title. The Orange have also had 35 NBA draft picks and produced several other pros during Boeheim’s tenure.

Ajak said as an avid basketball fan he was familiar with some of the history and prestige of the Syracuse basketball program, referencing the Orange’s 2003 national title team, which was guided by current NBA star Carmelo Anthony. During Ajak’s freshman year at the Church Farm School, Syracuse advanced to the Final Four.

“I want to win an NCAA title,” Ajak said. “That’s one of my goals to go to Syracuse because I felt that was one of the places that could give me a chance to be able to compete for an NCAA tournament ring and with a Hall of Fame Coach and be a conducive environment to be able to develop my skills and be able to pursue my dreams of being a pro.”

Led by assistant Adrian Autry, Syracuse has recruited Ajak since his sophomore season. He said over the past several years they haven’t backed off, which is one of the things that stood out to him.

Syracuse sees Ajak as a perfect fit to man the middle of Boeheim’s 2-3 zone defense. A key component is having a smart rim protector at the back of the zone.

The Orange have 7-foot-2 senior Paschal Chukwu and 6-foot-10 sophomore Bourama Sidibe, former four-star recruit, as the only true centers currently on the roster. Ajak should compete for time right away if Chukwu isn’t granted a sixth year of eligibility.

“I think the zone defense, the way they broke it down to me, they were like you don’t have to out-jump everybody to be in the middle,” Ajak said. “You gotta be the smartest guy in the middle to direct traffic...They feel I have quick feet to be able to step up and take a charge. Just use my IQ to be able to help defensively.”

After spending the last three years at the Church Farm School in the Bicentennial League, Ajak joins a Moose roster loaded with Division I talent, including recent UConn commit Jalen Gaffney.

On a team with only one other senior, Ajak’s maturity has already been appreciated by Berger and his staff.

“We almost never take a one-year kid, but he’s such a unique kid and incredible person that we thought he would make a big difference for our community and our team,” Berger said. “He’s a leader, he’s an incredibly high IQ player who makes winning basketball plays, and he’s a great teammate. He’s fantastic.”

The Church Farm School played against some of the smaller schools in the state in the Bicentennial League and competed at the PIAA’s Class 2A level come state tournament time.

Westtown competes in the Friends School League but also plays a national schedule, featuring matchups against some of the other top high school programs in the country. The experience will be a good test for Ajak before he heads to Syracuse.

“That will be awesome, that’s what I’m looking out for,” Ajak told CoBL on Sunday. “The competition that’s all I ever wanted. Get ready for college.”

Josh Verlin assisted in reporting for this story.