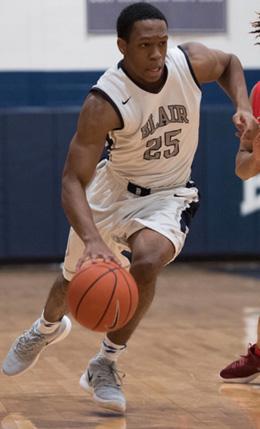 Jordan Dingle (above) will become the second member of his family to play in the Big 5 after committing to Penn over the weekend. (Photo courtesy Blair Academy)

Jordan Dingle’s first look at the Palestra wasn’t a great one. When he was in eighth grade back in November 2013, Dingle made the trip down from Valley Stream, N.Y. -- on the westernmost part of Long Island, adjacent to Queens -- to Philadelphia to watch his uncle Daniel Dingle play for Temple in a Big 5 battle against host Penn. But the now-bespectacled Dingle, who typically wears contact lenses, was a year away from getting his glasses.

“I couldn’t see the scoreboard,” he said. “But I thought they were very competitive. I saw the passion on both sides from both teams, and the importance that the game meant to them.”

Four years later, Dingle, his vision corrected, visited the Palestra again; this time, as the guest of honor.

The then-junior at Blair Academy (N.J.) took a visit to University City last fall, the Quakers’ basketball coaches having recruited the 6-foot-3 guard since his move from Lawrence Woodmere Academy (N.Y.) that summer, a move which also shifted him from the Class of 2018 into the Class of 2019.

It was an eye-opening visit, to say the least.

“It was a big shock when I went on my unofficial visit to see the culture they had there at Penn and the support that basketball receives,” Dingle said. “All I had really known about Penn was just the more academic standpoint of the school, what that had to offer.

“Penn’s facilities were beautiful, among the best I’ve seen from the schools that recruited me...and then just the love that the team gets from whether it’s alumni, local people, former players on the floor, after the games. It was beautiful.”

Penn coach Steve Donahue stayed on Dingle throughout his junior year at Blair and through this summer, watching the son of former UMass star Dana Dingle -- Daniel’s half-brother -- during competition with the New York Lightning this summer on the Nike EYBL circuit and throughout the fall, even as the Quakers built up an impressive 2019 class with four other commitments.

Dingle took one other official (school-paid) visit, to Boston University, the week after he visited Penn. If he hadn’t committed, a visit to Saint Louis was pending; Princeton had also been involved over the summer, but took another commitment.

It was Donahue, Dingle said, who made the difference: “His overall success and his approach to the game was very comforting because it reminded me of my high school coach, Joe Mantegna, a little bit, so I found some comfort in that. I would say that was the biggest differential.”

Donahue has certainly made an impact on Penn’s program in his first three seasons, taking over a team that won nine games the year before his arrival and building it up to go 24-9 this past season with an Ivy League championship this spring, then continuing that momentum with one of the strongest recruiting classes to come through 32nd and Walnut in a good while.

Lorca-Lloyd, who committed last week, is a 6-9, top-150 forward out of the same school that once featured current star junior forward A.J. Brodeur. Monroe, Martz and Charles are all guards/wings with plus size and a variety of skillsets; all have the ability to help the Quakers as underclassmen, though that’ll depend on development and ability to pick up the system.

In Dingle, the Quakers add another strong scorer; Dingle averaged 12.5 ppg while hitting 39.3 percent of his 3-pointers (48-of-122) in 22 EYBL games this summer, competing against many of the best players in his class.

“Even as other players were committing, Coach Donahue made it very clear that I was somebody that he really wanted, that I was his guy,” Dingle said. “I was never at any point with any of the schools recruiting me worried about other commitments, because I have that confidence in my own game, so I was never worried about that; but even still, Coach Donahue made it clear that I was player that he wanted, and that was comforting.”

With the Quakers coming off their first league title and NCAA Tournament appearance in 11 years, and likely to be among the favorites for the next couple with Brodeur and Ryan Betley both only juniors, expectations will be high for Penn for several seasons more, especially if this 2019 class lives up to its promise.

Dingle is setting the bar quite high -- a bar that might have seemed ridiculous for this program only a few years back, but might not be so crazy anymore.