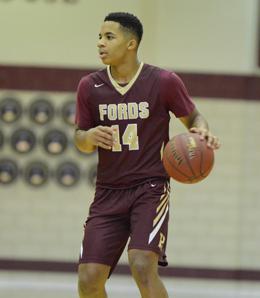 Jameer Nelson Jr. (above) is following in his father's footsteps by heading to St. Joe's after a prep year. (Photo: Josh Verlin/CoBL)

Jameer Nelson Jr.’s line of thinking regarding his collegiate decision was different from the one almost all others in his position have to make.

Forget thinking about potentially which school might offer the best playing opportunity early on, or which could set him up best as a professional ballplayer.

For Nelson, it was a matter of legacy, and living up to one of the biggest ones around.

Once he’d made up his mind, Nelson put his commitment in his own words; the following is presented with only a singular, extremely minor edit:

First and foremost, I wouldn’t be in the position I am in without God. Thank you to the college coaches that have shown interest in my abilities. I am extremely grateful for all of you putting your time and effort into recruiting me. To my past and current coaches, your guidance and wisdom has pushed me into a soon-to-be Division I athlete, but there’s much more work to do. Thank you to my family and friends who have supported me thus far. To my Mom and Dad, I am appreciative of your love and persistence. You guys set the example of hard work and success day after day. Upon graduation from the Haverford School in 2019, I will be embarking on a Post Grad Year as I continue to mature into a better young man and basketball player. I have decided that in 2020 I will be wearing the Crimson and Grey as a Saint Joseph’s Hawk! Thank you so much to Coach Martelli and staff for treating me as an individual and not a legacy. With the goal of leaving my mark at the university, I am determined to work as hard as I can for my teammates, coaches, family, and everyone on Hawk Hill! THWND!

Speaking to CoBL Thursday night, Nelson said it was the pressure of playing at St. Joe’s that was his only hangup since the offer came in, the reason it took him several months from the time the scholarship offer came in from head coach Phil Martelli this summer

Eventually, the Haverford School senior decided, he could handle it. And he was ready for the challenge, the extra year of prep school, and the expectations of putting on that Hawks jersey.

“It was my choice so I kind of got myself into it, but I’m really excited for that,” Nelson said. “Not that I’m trying to work towards something but it’s something that’s always there...people are going to say what they have to say, so that’s just life.”

Jameer Nelson Sr. was only one of the greatest to ever put on a Saint Joseph’s uniform, piling up 2,094 points and 713 assists in four years, leading the Hawks to an Elite 8 appearance in 2004 and winning National Player of the Year honors along the way. The Chester High product, a Big 5 Hall of Famer, was the No. 20 pick in the 2004 NBA Draft and has enjoyed a lengthy and productive professional career.

Now his son, born while he and his wife-to-be Imani were still undergrads at Saint Joseph’s, will have to deal with the inevitable comparisons to his father -- but, as the elder Nelson pointed out, his name wasn’t going to change no matter where he went to school.

“He was definitely going to have that pressure, no matter what,” the 14-year NBA veteran said. “And like I tell people, he’s been Jameer Nelson Jr. his entire life, so he knows how to handle it, and he’s done a great job so far with dealing with having the same name as me but also developing his own identity with the name.”

Indeed, Nelson Jr. has become a talented ballplayer in his own right the last few years, only taking the sport seriously as his primary athletic focus after his sophomore year at the Haverford School, having previously focused on both baseball as well as hoops.

Nelson made his varsity debut for the Fords as a sophomore in 2016-17, averaging 9.6 ppg, which he bumped up to 10.7 ppg as a junior in 15 games before an injury cost him the second half of the year.

He made it back onto the AAU circuit this summer, playing with the Philly Pride 16Us, and was good enough to earn offers from Rider, Siena, Saint Peter’s and La Salle this summer, and attract St. Joe’s head coach Phil Martelli to see him play.

“I think that it was moreso my attitude towards the game, I had become way more aggressive in the past couple years,” Nelson said. “I think I’m scratching the (surface), once I get everything together and gain a lot more confidence and stuff like that.”

The offer from the Hawks also came in this July, but the Nelsons decided to keep it under wraps, to avoid the attention it would surely bring.
There’s no hiding from it anymore.

The extra year at a to-be-determined prep school will allow Nelson, who just turned 17 in August, a chance to catch up physically with his peers. Currently 6-foot-1 and 185 pounds, Nelson is a solidly-built, athletic guard who can play at the rim, but is still very much learning how to be a high-level point guard, which he’ll need to be in the Atlantic 10 in a couple years.

Several of his collegiate options had been for next fall, but he didn’t mind taking the extra year.

“I think the main thing with me is that to get a lot more games and situations under my belt would be good...I’m trying to see myself improve a lot more when I go to prep school, because I’m really focusing more on basketball.”

The younger Nelson certainly doesn’t have to be his dad, especially not when he arrives at school on a roster that’s projected to have Ryan Daly, Charlie Brown, Jared Bynum and Hakim Hart all in the backcourt, plus any other players brought in either this recruiting cycle or the next.

He just wants to be himself.

“I think it means a lot to put any Division I jersey on due to the fact that I haven’t been playing basketball that long, seriously,” Nelson Jr. said. “I think [it being] St. Joe’s just kind of puts the icing on the cake.”