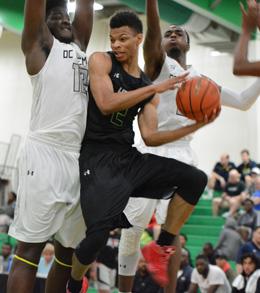 Isaiah Wong (above, with WeR1 in May) picked Miami (Fl.) over UConn, Clemson and more. (Photo: Josh Verlin/CoBL)

Ever since he wowed the crowds at the Donofrio Classic in April 2016, starring for the WeR1 squad and dropping 20-plus points on multiple occasions despite playing against those three years older, it was clear Isaiah Wong was special. Then finishing up his freshman season at Notre Dame (N.J.), it seemed certain Wong would end up playing Division I hoops.

By the time he’d arrived at Bonner-Prendergast as a junior, Wong was a sure-fire high-major prospect, a dynamic 6-foot-2 guard who could score from all three levels with ease, no matter what defenses threw at him.

Wong locked in his future plans Wednesday morning, committing to play for head coach Jim Larrañaga at the University of Miami (Fl.) next fall. The Friars senior said the Hurricanes had been his leader since the end of the summer, with an official visit to the school from Sep. 13-15 making it clear he’d found his landing spot.

“I just always thought how I could play a big role at Miami and how it’s a nice place there,” he told CoBL on Tuesday night, “and the official visit just made it better.”

Wong, the first member of Miami’s 2019 recruiting class, will be the second Catholic League alum to play for Larrañaga at Miami, following 2018 grad Ja’Quan Newton, a Neumann-Goretti product who scored 1,145 points for the Hurricanes. He picked Miami (Fl.) after also taking an official visit to Clemson; Pittsburgh, UConn and Villanova were his final five.

Larrañaga and his staff, led in this case by assistant Adam Fischer, first got on Wong when he was playing up with WeR1’s 17U squad last summer, when they were interested in current Maryland freshman Eric Ayala. When Ayala went off the board, they turned their full attention to Wong, offering a scholarship last August.

The Hurricanes stayed in contact with Wong and his mother LaChelle Lynette throughout the last year hosting him and the rest of the Friars on campus for a visit in December when they were in the area for an early-season tournament. And they tracked him all throughout his final AAU season, to events in Dallas, Indianapolis, Atlanta and Reading, often with multiple coaches in tow.

Miami’s extended pursuit of Wong gave him time to familiarize himself with the program’s playing style, watching numerous Hurricanes games this past season, enjoying the game of former Reading wing Lonnie Walker and company.

“They were always talking about how I play well with two guards, or [in a] three-guard system,” Wong said. “That’s how they play, and they always play fast-paced. They just think I’m a good player to fit in the puzzle for their team.”

As a junior at Bonner, Wong lit up the Catholic League to the tune of 22.2 ppg, winning MVP honors in his first go-around through the toughest high school gauntlet in the state as he helped the Friars into the league championship game and PIAA state 5A semifinals.

At the time of his commitment, he was rated a consensus four-star guard, and the No. 74 prospect in the 247Sports Composite Rankings for 2019.

Wong’s ascension to be one of the top guards around is a far cry from when he was growing up with two older brothers -- Brian Wong, older by nine years, and Terrence Wong, older by five. When he was in elementary and middle school, Isaiah Wong hung out around his brothers, going to their high school practices, desperate for any chance to work out with them.

“If they asked me to scrimmage with them, I would try my best,” he said. “Try to scrimmage with them, try to get buckets -- but they were too old for me, so I was struggling.”
Though he often had the ball in his hands for Bonner, especially after then-sophomore guard Tyreese Watson went down mid-season with a knee injury, Wong will be expected to play both guard spots in college, helping out current ‘Canes sophomore point guard Chris Lykes and junior off-guard Dejan Vasiljevic from the get-go, with a chance to make a major impact right away.

“I think he can (play both guard spots), but ultimately, he can just score in bunches,” Bonner coach Kevin Funston said. “Naturally, that’s what he does best. He had to take that [point guard] role for us this year...but he’s so dominant off the ball and catching the ball and going downhill.”

“I think it’s going to be a great fit because of their style of play,” Funston said. “I think he’s an ACC-type player and I think they’re going to give him a ton of freedom to show what he can do.”