The City 6 last year once again produced a crop of talented players set to continue their careers on the next level.

Villanova head coach Jay Wright sent four players from their national championship team to the NBA. Mikal Bridges, Nova’s first lottery pick since Randy Foye in 2006, was originally chosen as the tenth pick by the Sixers until he was moved to the Suns. Donte DiVincenzo was drafted to the Bucks at 17, Omari Spellman went to the Hawks at 30, and the senior point guard, team captain Jalen Brunson, went to the Mavericks at 33.

Several players from the other five teams in the area have produced players who didn’t get drafted but have just signed their first professional contracts. Here’s a look at the City 6 Class of 2018, and where they’ve wound up… 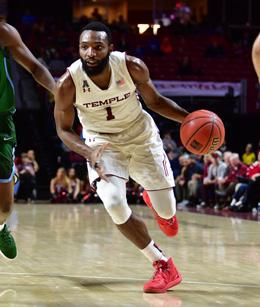 Brown was a five-year player, two-year starter, who was named team captain his fourth year with the program. At Temple, he set a school record for games played, with 139 total, 71 of which were starts. During the 2015-2016, he was first in the American Athletic Conference in assist-to-turnover ratio, and was tenth nationally at 2.26.

KK Alkar plays in the Croatia-Premijer (premiere) Liga. Last season, they went 7-17 in their conference. They finished ninth in Croatia’s top league.

According to Euronet, Alkar head coach, Srđan Helbich, expects to include Brown in their starting rotation. Founded in 1955, Alkar last made the playoffs in the 2010-2011 season. The league’s top team, Cedevita, has recently dominated Croatia’s premier league, winning five straight championships.

Enechionyia, the 6-10, 220 lb. forward from Springfield, Va., played the last four years for the Owls under head coach Fran Dunphy. His senior year, the stretch-forward led the team in rebounding, with 5.8 rebounds per game, and in blocked shots, with a total of 46. He stands as seventh in the Temple record books for blocks, with a career total of 170.

After his senior season, Enechionyia pursued his NBA dreams, and ended up on the roster for the Pistons’ summer league team. He averaged 3.2 points per game, and 2 rebounds per game for Detroit. In late August, he signed a professional contract with Real Betis Energía Plus, in Spain.

Playing in the LEB Oro professional league, a second tier league in Spain, Real Betis went 6-28 last season. The organization, formerly known as Baloncesto Sevilla, hasn’t had a winning year nor advanced to the playoffs since the 2013-2014 season. Enechionyia becomes the fourth American on the current roster, including class of 2014 Boise State graduate, Thomas Bropleh. 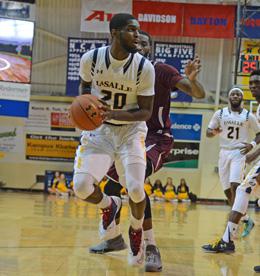 B.J. Johnson (above) signed with the Orlando Magic this fall and is expected to play for their G-League team. (Photo: Josh Verlin/CoBL)

Johnson played his first two seasons of college ball at Syracuse, until he transferred to La Salle his junior year. Over two seasons with the Explorers, Johnson averaged 19.9 points per game, 7.3 rebounds per game, and started in 55 of his 56 games. He lead all Big 5 players, averaging 20.8 points per game during his senior campaign, and was named Second Team All-Atlantic 10.

Despite NBA interest, including some workouts with the Kings and Sixers, Johnson was not ultimately drafted this year. After the draft, he was placed on the Hornet’s summer league team. He played an average of 11 minutes per game, and scored 5.5 points per game in Vegas summer league action.

Earlier this month, the Orlando Magic’s announced that they had signed Johnson to a deal. Josh Robbins of the Orlando Sentinel reported that Johnson is under an Exhibit 10 deal, which implies that if he gets waived by the team, he will get a signing bonus to play for the Magic’s G League affiliate in Lakeland.

Mojica averaged just over 11 points in each of his final two seasons with the Dragons. As a senior, he started in all 33 games, and led the team with 62 three’s, shooting 32 percent from deep. He was fourth in the CAA in steals per game, with 1.5, and ranks eight in total steals in the Drexel record books. The 6-2 guard scored 1,153 total points over his stretch at Drexel.

He was selected third overall in the Puerto Rico’s BNS league, by Los Atléticos de San Germán. Last season the squad finished 14-21. They haven’t won the championship since 1997. Mojica, whose parents come from Puerto Rico, joins a team with combinations of Puerto Rican and American players. Interestingly, Mojica will be playing alongside O.J. Mayo, who’s in the midst of a two-year suspension for violating the NBA’s anti-drug program.

After being sidelined for the majority of his junior season, Newkirk led the Hawks in scoring last year with 17.4 points per game. He was named second-team Atlantic 10 All-Conference and All-Big 5. Of the 31 games played last season, Newkirk scored double figures in 29.

After some summer workouts with the Nets, there weren’t any teams that decided to add the 6-0 guard to their summer league rosters. In mid August, Newkirk signed a professional contract with the Halifax Hurricanes.

The Hurricanes play in the Atlantic Division of the National Basketball League of Canada. Last season, they were the first seed in their conference, with an overall record of 36-19. They last won the champion championship in 2016, and lost in a seven game series final with the London Lightning last year. Joining Newkirk, Halifax has also signed Brian Asbury from University of Miami, and Oregon State’s Langston Morris-Walker.

Basketball Stars Weert, founded in 1968, was dissolved from the Dutch Basketball League, due to financial problems. The club was replaced by Basketball Academie Limburg, which was originally an academy designed to develop youth players in the Netherlands.

Last season, in its debut for the premier league, BAL finished last in the league, with a record of 4-28.

Williams, a 6-8 forward, shot 59.7 percent from the floor, his senior season, placing him as the third-highest in program history. That year, he averaged 9.4 points per game, 8.5 rebounds per game, and played about 30 minutes per contest. Williams specifically shined on the defensive side of the ball, where he was named to the Colonial Athletic Association (CAA) All-Defensive Team.

He will join a club named Frøya Basket, who competes in the BLNO, Norway’s top professional basketball league. The program last won the league in 2012.

Williams only averaged two points throughout his four years on Hawk Hill. He ended up with a total of 47 minutes played his senior season. At 6-9, 235, the Philadelphia Electric product clearly brings size and strength to his new team.

Williams will join Polpharma Starogard Gdanski, who currently competes in the Energa Basketball Liga, the top league in Poland.

The program was promoted to the premier league in 2004, and they last won the Polish Cup Final in 2011. They finished out last season at 15-17.