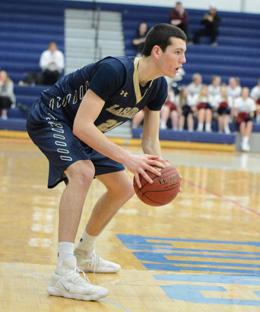 Zach Crisler (above) committed to Rice last week after taking two trips to the school in August. (Photo: Josh Verlin/CoBL)

When he was on the campus at Rice University for the first time, in mid-August, Zach Crisler got a good impression. But it was tough for the La Salle College HS senior to be 100 percent sure he was ready to pull the trigger and commit; the campus was just beginning to buzz as students arrived, but with the freshmen in orientation and the upperclassmen not around for a few more days, there was an important element missing.

“I was telling [my parents] ‘yeah, I think this is the spot, this is really where I want to be,’” Crisler recalled Thursday afternoon, “and they were like ‘are you sure, are you positive, it wasn’t really school yet, you don’t know what it’s going to be like when you get there.’

“So we told the coaches our concerns, and they were like ‘let’s get you right back up on campus for an official [visit.]”

Spurred on by the notion that he’d already found his landing spot, Crisler and his family didn’t waste any time getting back.

Just 10 days later, on Aug. 27, Crisler and his parents found themselves on another flight to Houston, in time for the second week of fall classes at the 106-year-old institution. And this time, Crisler saw all he needed to see: a campus full of students, a team workout with the entire team, a sports management class with several potential future teammates.

So on September 14, he made it official, becoming the first of three commitments Rice ultimately scored in the span of 48 hours last week.

“I think I knew it deep down, all along, I think it was just finally just looking at all my options, really making sure that was the place I really wanted to be,” Crisler said. “It’s awesome, it’s an unbelievable school, the basketball program’s on the rise, [head coach] Scott Pera’s a great guy. I think it’s just a really good all-around fit.”

Pera, who grew up in Hershey, went to PSU-Harrisburg and spent two years on staff at Penn (2012-14) before going down to Rice as an assistant coach (2014-17), first offered Crisler a scholarship after watching him play for Team Rio National at the Under Armour Association stop in Indianapolis this April.

The 6-foot-9 forward immediately became a priority recruit for the Owls’ staff, which also includes fellow central Pennsylvania native Mark Linebaugh as an assistant coach. They were enamored by Crisler’s upside and length, his ability to stretch the floor and defend the rim.

“The process, (Pera) did it right the entire time,” Crisler said of his future coach. “Everything was never wavering, he never wavered in his message, he had a vision from the start and he stuck with that, he never switched anything up. Told me from day one ‘you’re the guy we want’ and he stuck through that the entire way.”

As a junior at La Salle, Crisler averaged a shade over 10 ppg for the Explorers, who went 15-8 (8-5) in the Philadelphia Catholic League. He’s one of two Division I commits on the La Salle roster, along with 6-7 Princeton pledge Konrad Kiszka.

Pera’s first season at Rice didn’t go quite as well, as the Owls went 7-24 (4-14 C-USA) a year after winning 23 games in the final of three seasons under now-VCU boss Mike Rhoades. Crisler and his classmates are hoping to be the ones to help lead the program back to the NCAA Tournament for the first time since 1970; the Owls haven’t won an NCAA game since 1954.

When Crisler arrives on campus, he’ll be joining a team that could utilize his height, as both 6-8 Dylan Jones and 6-8 Jack Williams will have exhausted their final years of eligibility. Rice also got a commitment from 6-10 Max Fiedler out of Melbourne (Fl.), but he’s more of an interior post.

“Of course, I’ve got to work for it, but there’s a lot of minutes open for a stretch-four,” Crisler said. “I think they showed me the max amount of minutes I could get as a freshman would probably be like 28 minutes [per game], which is crazy for a freshman, that’s something you dream of.”