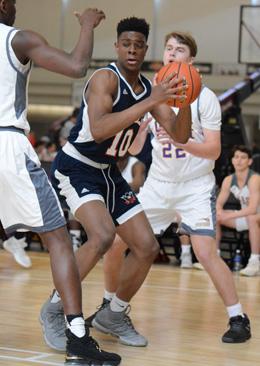 During the past four years, Keeshawn Kellman has grown quite a bit.

Kellman shot up from a 5-foot-11 freshman when he entered Allentown Central Catholic to a 6-foot-8 senior. He also saw his prospect status grow from a bit of an afterthought to an interesting target for several Division I programs.

Now taking a prep year at the Perkiomen School, the 2019 forward made the leap to Division I recruit official on Monday when he committed to Princeton after taking his official visit this past weekend.

“I just felt it was the right fit,” Kellman said. “I felt good coming back on Sunday, but I just wanted a night to sleep on it, and I woke up with the same great feeling (Monday).”

Kellman entered his senior season at Allentown Central Catholic as a 2018 recruit. He had a breakout season, helping the Vikings get to the PIAA Class 5A quarterfinals.

However, he said Mount St. Mary’s and the Naval Academy, which wanted him to attend its prep school, were originally the only two Division I programs to show any serious interest.

Then Kellman, who didn’t turn 18 until last month, announced on March 1 that he was taking a prep year. Suddenly a number of Ivy League and Patriot League coaches came calling. Along with Princeton, Kellman had offers from Colgate, Lafayette, St. Francis, Bucknell, Hartford, Navy and Drexel.

“I kind of used that as motivation because the prep year is kind of a last resort per say,” Kellman said. “Before I announced that I was going to prep school, I was still working extremely hard to get Division I offers in 2018. I realized it wasn’t going to work out that way. I would have ended up going into a situation that wasn’t the best for me, so I decided the best option for me was to go 2019.”

The Tigers and coach Mitch Henderson are coming off a disappointing 13-16 season in 2017-18 after being one of the top teams in the Ivy League over the past several years.

The Tigers have some young retrurning frontcourt pieces, including sophomores Sebastian Much (7.1 ppg) and Jerome Desrosiers (6.2 ppg) who both averaged more than 15 minutes per game last year. Kellman’s defense and size should still allow him to at least compete for minutes upon his arrival.

“I think he’s somebody who could step in right away and be a guy who can rebound and defend at the rim,” Perkiomen School coach Tom Baudinet said. “Offensively, I think he’ll need to be able to improve and defensively on the perimeter he’ll need to improve, but it’s definitely something he has the potential to do, and I expect him to have a really good career once he gets there, and they start working with him.”

Kellman is a terrific rebounder, and his length and athleticism make him a disruptive post defender. He still plays with the same motor he did when he was an undersized big scrapping for rebounds.

While Kellman’s game has come a long way in the past year, he still has a lot of room to continue to grow. When he gets to Princeton, he will likely see a little more time out on the perimeter as he switches between the 3, 4 and 5 for the Tigers.

Knowing this, Kellman is using the prep year to put an emphasis on improving his offensive game and become a more well-rounded player. Baudinet said he worked out with Kellman about 10-12 times from May to July, and Kellman spent a lot of time in the gym working on his own.

“My offensive game is getting a lot better,” Kellman said. “I’ve started to get a reliable shooting stroke from outside. I just need more reps to get the muscle memory down more, so I can take shots from outside. My post footwork is improving too...Trying to breakdown my opponent, read the floor more. I’m developing a hook shot because I know that’s pivotal part of a big man’s repertoire in college.”

Other areas Kellman said he needs to improve upon before he plays in the Princeton offense are his passing ability and basketball IQ. He said he watches versatile big men like Draymond Green, Karl Anthony-Towns and Marvin Bagley to help him learn.

Kellman has also emphasized preparing himself physically for the next level. He joined the Perkiomen School’s strength and conditioning club to get a few extra workouts in every week. He said he has put on about 10 to 12 pounds since the live period ended, and is now playing at about 225 pounds.

“I’m trying to get used to playing with this muscle mass,” Kellman said. “I’ve been making strides over the past couple of days. I think this might be a comfortable playing weight. I feel much stronger on the court and more explosive. I just need to work on conditioning and things like that.”

With still several months to go before he arrives on Princeton’s campus, it will be interesting to see the type of player Kellman is by next summer. His work ethic could turn him into a real steal for the Tigers, especially if he can add an outside shot.

“Obviously his coaches at his old school did a great job,” Baudinet said. “He made a massive jump between his junior and senior year. He’s somebody who is a late bloomer and has a high ceiling and continues to get better because he’s such a hard worker.”