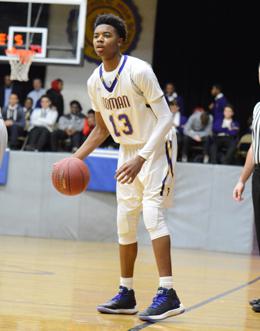 Instead of the Roman Catholic senior picking up the phone to call Phil Martelli with the good news, Martelli called Hart first. The Hawks’ longtime head coach was just following up with his recruit two days after Hart had finished up his official visit, and Hart opened by saying that his decision had been made.

Then he went downstairs, to fill in his parents.

“I was like, I could be a great player for them,” Hart said. “[And] they liked my idea of going there.”

Hart made his commitment public Wednesday in a ceremony at Roman, where he transferred before his junior year after spending his first two years of high school as one of South Jersey’s top scorers at Kingsway High School.

As his recruitment went on, Hart’s future looked destined to keep him in Philadelphia, with La Salle and Temple also having him on campus after the July recruiting periods ended.

But his only trip to City Avenue was enough to do the trick.

“When I got on campus, I felt like I was supposed to be there,” Hart told CoBL on Tuesday evening. “The players felt like I was part of the team, the coaches made me feel welcome. The campus is pretty nice.”

In his first year at Roman, Hart averaged 15.1 points on the Catholic League and PIAA Class 6A state champions, the third-leading scorer on a group that also included Towson commit Allen Betrand as well as classmate Seth Lundy and sophomore Lynn Greer III, also high-level Division I recruits.

A 6-foot-6 off-guard with long arms and legs plenty capable of adding some more muscle to his 185-pound frame, Hart has made his mark in high school primarily as a 3-point specialist, though he’ll take his man off the bounce in mismatch situations or if a driving lane presents itself.

This summer, playing with the Philly Pride AAU organization on the Under Armour Association circuit, Hart averaged 14.3 ppg, 5.0 rpg and 3.0 apg in UAA play, making 40.8 percent (31-of-76) from beyond the arc and 42.2 percent overall.

“I think the most exciting thing about Hakim is as good as he is now, there’s really no telling how good he can be, because he hasn’t fully grown into his body,” Roman coach Matt Grifin said. “The sky’s the limit for him.

“I think he can really, really shoot the basketball at an elite level, but his ball-handling skills are underrated. So I’m excited for him to continue to develop those skills and for people to see them.”

Hart is the first member of St. Joe’s 2019 recruiting class, and the first local player to commit to the Hawks since current redshirt sophomore Charlie Brown did so in May 2015, before the George Washington grad did a prep year at St. Thomas More (Conn.).

He won’t be the only Catholic League product on the roster when he arrives next year; Ryan Daly, sitting out this season after transferring from Delaware, is a 2016 graduate of Archbishop Carroll, while redshirt junior guard Lamarr Kimble graduated from Neumann-Goretti the year prior. Chris Clover, a St. Joe’s Prep product, is entering his final year of collegiate eligibility this season.

The Hawks have as many as three other scholarships to give away that year based on current scholarship numbers, with two seniors set to graduate this spring and only 11 of the maximum 13 scholarships currently taken.

St. Joe’s -- which has made the NCAA Tournament six times since 2001, most recently in 2016 -- is coming off a 16-16 (10-8 Atlantic 10) season which saw the Hawks lose multiple players to season-ending injuries, including Brown and Kimble.

Martelli, who’s has also developed a reputation for developing NBA pros, helped out by the long career of Jameer Nelson but also getting Langston Galloway and DeAndre’ Bembry drafted in the last four seasons, with several other potential pros on the current Hawks’ roster.

With his length and shooting ability, Hart knows he could be in that conversation as well someday.

“(Martelli) brought up all those guys; he said ‘you could be just like them, you’re talented just like them,’” Hart said. “It meant a lot because I know I can, I just need someone to show me the way.”