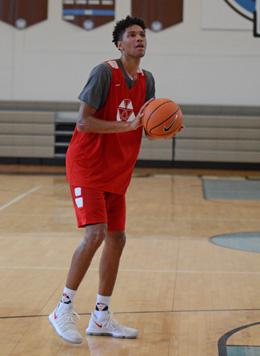 When Maxwell Lorca-Lloyd began his first year at Northfield Mount Hermon (Mass.) in 2015, repeating his freshman year of high school, the young, athletic big man found himself often matched up in practice against senior forward A.J. Brodeur. And Brodeur let his younger teammate let him know just how far away he was from being ready for college basketball.

“My freshman year, I couldn’t guard him at all,” Lorca-Lloyd recalled Saturday evening.

But on his official visit to Penn two weeks back, the Brooklyn native got his chance to take on his former high school teammate again, and found that he’d made significant progress: “I wouldn’t say completely closed the gap between us,” he said, “but I’ve made a lot of strides in the past couple years.”

Lorca-Lloyd will get plenty more chances to prove himself against Brodeur -- in practice next year, when they’re teammates yet again. That future became reality on Saturday, when Lorca-Lloyd became arguably the biggest recruiting score of Steve Donahue’s four-year tenure with the Quakers.

Ranked in the top 150 prospects in his class by Rivals and No. 151 by 247Sports, Lorca-Lloyd, who played his AAU ball on the Nike EYBL circuit with the PSA Cardinals, pulled in offers this summer from the likes of Stanford, Vanderbilt and Ohio State. Instead, he’ll be headed to the Ivy League and playing for its current defending champs.

“I kind of realized it over the past two weeks,” he said. “Just thinking about college, not just as a player but as a person, as a student in the community, and I just felt really at home on my visit.”

If the Northfield Mount Hermon name sounds familiar, it should. Lorca-Lloyd is the fourth NMH product to commit to Penn in the last five years, joining current seniors Jackson Donahue -- no relation to the coach -- and Collin McManus, plus Brodeur, who’s putting together a stellar career in a Quakers uniform thus far.

Brodeur’s success in particular, averaging 13.4 ppg and 7.1 rpg while starting all 61 games in his first two seasons, was particularly encouraging to Lorca-Lloyd, as were the things his former and future teammate told him about the school originally founded nearly 300 years ago.

“(Broduer) felt that NMH really prepared him for college and Penn in general, because our cultures are similar, yet they’re a little bit different in a good way,” Lorca-Lloyd said. “The transition for him was really helped by he did things at NMH.”

Under the direction of head coach John Carroll, the elite New England prep school has become one of it’s best basketball powerhouses, going 31-4 and advancing to the National Prep Championship game this spring. And Brodeur, who also had high-major options but chose Penn, is far from the only productive former Hoggers player.

“AJ’s a pretty good example of it -- the numbers they have with us translate really well to college,” Carroll said. “Nate Laszewski averaged 19 points for us and he averaged 18 for Notre Dame their three games in the Bahamas. I forget exactly what A.J.’s numbers were but I think it was like 16 for us and 14 for Penn. [Atlantic 10 Rookie of the Year] Kellan Grady was 14 points for us and 18 a game at Davidson.”

So perhaps it’s not too far-fetched for Penn fans to expect Lorca to put up numbers close to the 10 points and eight rebounds he averaged as a junior at NMH, when he started on a team that featured seven Division I-bound seniors.

A 6-10, 210-pound forward, Lorca-Lloyd is a hard-working post player with an expanding offensive game, though he’ll make his mark early on in his collegiate career within 10-12 feet of the hoop.

“He was really a rim protector, rim-runner, terrific finisher,” Carroll said. “I say it all the time, [he’s] a high-major energy guy, high-major rim-runner, high-major defender and shot 75 percent from the field, taking 200 shots [as a junior].”

It’s a group that will be tasked with maintaining the level of success the Quakers have gotten back to under Donahue, who needed just three years to take a nine-win squad and get it back on top of the Ivy League. This March, Penn captured its first hoops championship in 11 years and advanced to the NCAA Tournament for the 24th time in program history, giving No. 1 seed Kansas a good scare before bowing out in the first round.

Winning is something Lorca-Lloyd is plenty familiar with. In his three years at NMH, the Hoggers have won 89 games; 25 more as a senior, and he sets the new school record.

“I’m coming from a winning culture at Northfield Mt. Hermon,” he said, “and I want to continue winning when I go onto the next level.”