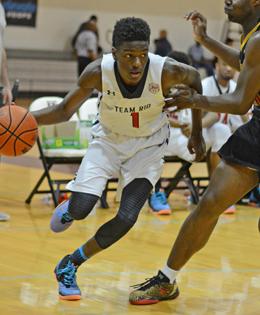 Bryan Antoine (above, in 2016) committed to Villanova on Tuesday morning. (Photo: Josh Verlin/CoBL)

Villanova's latest big recruiting splash came seemingly out of nowhere. And it's the most significant one for Jay Wright in quite some time.

Bryan Antoine, a five-star guard out of the Ranney School (N.J.) and consensus top-20 prospect in the Class of 2019, had scheduled numerous official visits in September, including to Duke and Kentucky, with his trip to 'Nova not supposed to take place until November.

But an unofficial visit to the Main Line at the end of August clearly was enough to convince Antoine that he'd found his future landing spot, and on Tuesday morning the 6-foot-5 shooting guard became Jay Wright's third pledge in the rising senior class.

“The reason why I chose Villanova was because it was family,” Antoine told PrepCircuit's Pat Lawless. “Family goes a long way with me and their school. I also looked at how they played and how they play for each other. I’ve done the same thing with my coaches in AAU and school ball. I feel like I’ve already lived in that for so long and Villanova fits that system perfectly.”

While four-stars Eric Dixon (Abington, Pa.) and Justin Moore (DeMatha, Md.) had the Wildcats' 2019 class off to a strong start, there's no doubt that the addition of Antoine will bring a significant bump in the rankings.

The No. 12 player and No. 3 shooting guard in the ESPN Top 100 rankings, Antoine is the second five-star commitment for Villanova in two years, after Hudson Catholic (N.J.) and current 'Nova freshman Jahvon Quinerly.

Part of the Team Rio National AAU program which made waves as freshmen three years back, Antoine and fellow Ranney School/Team Rio teammate Scottie Lewis both piled up the high-major offers before their sophomore years of high school, and both have become some of the most sought-after talent in the country.

A silky-smooth guard who stands 6-foot-5 and weighs 180 pounds, Antoine is a true three-level scorer who's one of the best shot-makers in the country. Capable of playing and defending either guard spot, he'll fit just fine into Villanova's versatile, multi-guard attack, which has been one of the most efficient offenses in the country during a five-year run of dominance that's brought two national championships back to campus.

Now that Antoine has committed, the focus for Villanova turns to what else they will do in the Class of 2019. Antoine's pledge means the Wildcats now have 12 projected players on the 2019-20 roster, and Wright has made it clear he thinks having 13 scholarship players on the roster leads to too crowded of a situation.

But the Wildcats are still involved with several high-level prospects for next year. Five-star point guard Nico Mannion (Pinnacle Hills, Ariz.), the No. 11 player in the rising senior class, has Villanova in his top four; IMG Academy (Fla.) teammates Josh Green (No. 8 per ESPN) and Jeremiah Robinson-Earl (No. 38) both have 'Nova in their top five. That's in addition to Scottie Lewis, Antoine's Ranney teammate, and top-ranked point guard Cole Anthony (No. 2 ESPN), who's never really released a list of favorites but has Villanova in the mix.

If Wright takes another commitment, that could be a sign someone is leaving early next spring, whether to the NBA Draft -- though at the moment there aren't any non-seniors who find themselves in the mock drafts -- or due to transfer.

CoBL will have more on this story as it becomes available