Jameer Nelson using Lead Guard Invitational to give back 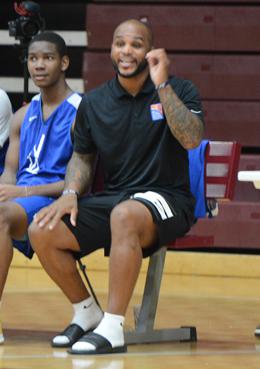 Jameer Nelson (above) coaches a team during the showcase game of the 2018 Lead Guard Invitational. (Photo: Josh Verlin/CoBL)

Even though it’s been nearly 15 years since Jameer Nelson finished up his four years at Saint Joseph’s, embarking on a not-over-yet NBA career that’s already taken him from Orlando to Dallas to Boston to Denver to New Orleans to Detroit, he hasn’t lost track of what’s going on in the basketball world back home.

“You can kind of get a sense nowadays off of social media, of a guy’s personality, which sounds crazy. But it’s the truth.”

The last couple of years, Nelson hasn’t needed social media to learn about the next generation of ballplayers coming up through the area’s high schools.

His son, Jameer Nelson Jr., a senior at the Haverford School and Division I recruit, keeps him connected. And the last two years, Jameer Sr. has been running the Pete & Jameer Nelson Lead Guard Invitational, bringing together some of the best backcourt prospects in the area for a three-day, intense camp that has served as a crash course in hoops, recruiting, and life.

And unlike similar camps run by NBA pros, such as the CP3 camp in Las Vegas or the Victor Oladipo camp in Washington, D.C., both of which cater to national prospects, Nelson’s camp is for locals exclusively.

“We can make it a national thing,” Nelson said, “but (that would be) taking away from the area where I’m from.”

There’s no doubt that Southeastern Pennsylvania -- and the city of Chester, especially -- has been and always will be home for Nelson. Despite his professional life taking him all over the country, including a 10-year stint in Orlando, he’s always maintained a home here, raised his family here, sent his children to school here.

That’s why he was in the gym at Girard College all week, running his camp for the second straight year while he’s still trying to find a home for his 15th professional season this fall.

The 17 participants at the 2018 edition of the Lead Guard Invitational hailed almost entirely from the greater Philadelphia region, with one participant from Delaware and one from New Jersey.

Nelson’s hometown of Chester was represented by Clippers senior Michael Smith; the other guards hailed from Roman Catholic (Seth Lundy, Justice Williams), Imhotep Charter (Donta Scott), Neumann-Goretti (Chris Ings), Bonner-Prendergast (Isaiah Wong), Westtown (Noah Collier), and several other big-name program. The talent on the court was a collection of the best guards and wings around, freshmen through seniors.

“That was definitely a great thing that they did for this camp: have the best high school guards in Philly and Jersey and just combine them,” said Lundy, a rising senior whose final 10 schools includes the likes of Oregon, Florida and Temple. “The younger guys can look up to the upperclassmen, see how hard we work and see how hard it is at the next level.”

Though the seniors were showing the underclassmen a thing or two about what it takes to be a high-level Division I recruit, all the camp’s participants were all put to shame by its namesake.

Nelson, a notorious gym rat, put his campers through three days of non-stop drills and seminars, including skill development sessions twice a day, locker room talks, and workouts with former Delaware head coach Monté Ross. There were academic lectures and discussions about entrepreneurship and recruiting, yoga and boxing sessions, and a showcase game on Wednesday night with Ross and Nelson serving as coaches.

All in all, the campers got just a taste of how Nelson has been able to sustain such a lengthy pro career despite never being the biggest or most athletic guard around, at any level.

“He works hard,” Archbishop Woods Rahsool Diggins said. “They put us through a workout. Pshhh, it was crazy.

For even the oldest players in the camp, Nelson’s legacy is still mostly as a longtime pro, his days at St. Joe’s only the faintest memory from their youth.

For the younger members, who were babies when Nelson was tearing up the Big Five, their knowledge of him comes from watching the NBA and playing video games.

“I knew him as the Orlando Magic point guard,” said Diggins, who wasn’t yet two years old when the Hawks were making their magical 2004 run to the Elite 8. “I knew he could shoot from 2K.”

“It’s not weird because I’m still, I guess, relevant,” he said. “Especially in this area, I’m fortunate enough to have a name that kids know. And if they don’t know, their parents know.”

These sorts of intensive, focused camps weren’t around when Nelson was in high school; a trip to the famed ABCD camp in New Jersey was the closest he got.

But they’re becoming more common these days, a way for elite prospects in different areas to get high-level instruction about the game and hone skills that will help them be successful later in life. Nelson’s campers were encouraged to get their college degrees -- Nelson himself just finished up his degree at St. Joe’s this spring -- and to look into business opportunities, to be ready for a career after basketball.

“I’ve always wanted to help kids; it’s part of being a professional, is giving back,” Nelson said. “And it’s a brotherhood. I don’t care what level of basketball it is -- if you can help somebody, you can help them, whether it’s a collegiate athlete, high school, overseas, NBA, whatever.”

Nelson knows at some point in the near future that he won’t be able to find another one-year contract, that his time as an NBA pro will come to an end. He called the idea of coaching “very intriguing,” mentioning that he’s had several offers from coaches to join their staffs after he retired.
Playing or not, Nelson said he intends on bringing the Lead Guard Invitational back for at least one more year and hopes to keep it going well into the future.

“I would like to continue to have my hand and my foot inside the game of basketball at some level, to be able to help, and to be able to provide the things that I was provided, the knowledge that I have,” he said. “I think I have a good basketball brain, and I think instead of letting it go to waste, I can pass on my knowledge to everybody else.