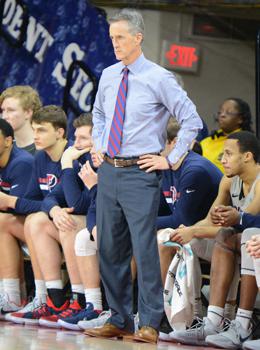 Penn coach Steve Donahue (above) has stepped up his scheduling for his defending league champion Quakers. (Photo: Josh Verlin/CoBL)

Penn became the first school in the Big 5 -- and second in the city -- to release its full schedule, as the Quakers unveiled their 2018-19 slate on Tuesday afternoon. The defending Ivy League champs, coming off a 24-9 season (12-2 Ivy) and with most of their talent returning, will face a new twist in their includes their traditional Ivy slate, and also get plenty of intriguing non-conference matchups in addition to the usual Big 5 competition.

That includes the earliest regular-season game in program history, the program’s first-ever trip to the Paradise Jam, a trip to one of the West’s most infamous gyms, a visit from an ACC program and more.

“With this year’s schedule we strived to provide our student-athletes with the greatest college basketball experience possible,” Penn head coach Steve Donahue said in a release.

Penn will kick things off in Fairfax, Virginia, against George Mason on Nov. 6, the early start date due to the start of the college basketball season moving up from a Friday to a Tuesday for the first time. This will be the Quakers’ and Patriots’ fourth meeting in six years since their first game in the 2013-14 season; Penn has fallen in all three of those matchups.

Penn’s home opener is scheduled for Nov. 9 at the Palestra, where it will face Rice, under the guidance of former Penn assistant Scott Pera.

Following that, the Quakers will head to the Virgin Islands, for their Paradise Jam debut. In that eight-team tournament, the Quakers will open play against Northern Iowa, with Eastern Kentucky or Kansas State awaiting the winner/loser; Oregon State, Old Dominion, Kennesaw State and Missouri round out the field for what’s typically one of the higher-profile early-season tournaments.

On Dec. 22, Penn will travel to ‘the Pit’ in New Mexico, where they will play the New Mexico Lobos for the second time in school history. Their first, and only other, trip to the Pit was during the 1992-93 season, a 54-51 New Mexico win.

“Playing in a tournament such as the Paradise Jam in the US Virgin Islands and playing at a place such as The Pit at New Mexico are tremendous experiences for a student-athlete,’ Donahue said. “Our philosophy with scheduling continues to be one where we want to challenge our program to be able to compete on the national level.”

In Big 5 play, Penn will compete against defending national champions Villanova (Dec. 11) and Saint Joseph’s (Jan. 26) at home; they will travel to La Salle on Dec. 8, and to Temple on Jan. 19.

Scheduling games against Big 5 opponents every season is an integral part of keeping traditions alive in the Philadelphia basketball community. Penn’s game against Temple this season will be no exception.

Donahue, who was an assistant under Temple head coach Fran Dunphy at Penn from 1989-2000, will face his mentor for one final time, as Dunphy has just recently announced his retirement following this season.

The month of January will include only four games for the Quakers, each of which will be played on Saturdays.

On Jan. 5, Penn will play away at Princeton. A week later, the Tigers will visit the Palestra. This will be the first time in Ivy League history that the Penn-Princeton series will be completed before Penn plays another conference game, as well as the first time since 1977-78 that the teams will play both their games before the calendar hits February.

Penn and Princeton, who have historically co-dominated the conference, have met in 239 games over their rivalry. Last season, the Quakers swept the Tigers for the first time since the 2007-2008 season.

The Quakers begin the rest of the Ivy League slate on Feb. 1-2, with the Cornell/Columbia weekend, followed by the Brown/Yale trip the following week. They don’t host an Ivy League weekend until Feb. 15-16, when Dartmouth and then Harvard visit, followed a weekend later by Columbia/Cornell.

A trip to Harvard/Dartmouth (March 1-2) and visits from Brown and Yale (March 8-9) end the regular season, with the Ivy League tournament taking place at Yale for the first time on March 16-17.

In addition to Penn, Temple, Villanova, and Drexel have already released their non-conference schedules to the public.

Temple, which opens against La Salle on Nov. 6, will play 13 games out-of-conference, including two games in the Legends Classic at the Barclays Center in November, a trip to Mizzou (Nov. 27) and a cross-city game against Drexel on Dec. 22. Villanova will play Temple, Saint Joseph's, and La Salle at home this season, but also has a high-profile trip to Kansas on Dec. 15 in a rematch of the 2018 National Championship game, as well as a matchup against UConn at the Garden on Dec. 22 and a spot in the Advocare Invitational at Disney World in November.

The Dragons, who released their full slate recently, will only face two teams from the Big 5, playing at La Salle (Nov. 17), and at the Palestra against Temple (Dec. 22). They’ll also host UMBC, which became the first No. 16 seed to upset a No. 1 seed and win a game in the NCAA Tournament this spring, on Dec. 8.

In wake of the excitement over the release of this season’s schedule, unfortunate news arose regarding Penn sophomore Jelani Williams.

Williams, a 6-foot-5 point guard from Sidwell Friends, missed his whole freshmen season after tearing his left ACL during his senior year of high school. On Twitter, Williams announced that now he had torn his other ACL during a charity game in July.

In his Tweet, Williams said that he had undergone surgery, and that it was successful. He will again be forced to sit out for the entirety of his second season at Penn, after being expected to help fill in for the graduation of senior guard Darnell Foreman from last year’s Ivy League championship squad.