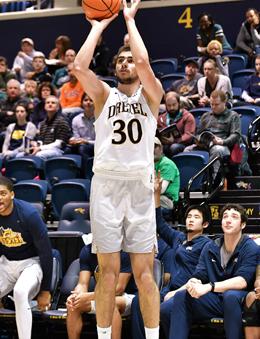 The Drexel Dragons have been down in Australia since Sunday -- though they left Friday -- and played the first game of four on Monday evening local time, which also happened to be at 5 AM back here in the City of Brotherly Love.

Nevertheless, here are some observations from the first look at the 2018-19 edition of the Dragons, a 104-94 loss at the hands of the Dandenong Rangers, a semi-pro team in the South East Australia Basketball League:

1. Dragons’ legs still somewhere over the Pacific
Let’s be fair to Drexel, which traveled for a day straight, landed in Australia on Sunday morning and had to then play a 48-minute basketball game with a shortened (24-second) shot clock, against a team comprised largely of mid-20-somethings, just about 36 hours later. If it were the regular season, the number of fast-break layups that the Dragons gave up, consistently getting beaten down the court -- typically after made baskets -- would be a major red flag, but given the circumstances it’s more understandable, though I’m sure head coach Zach Spiker still isn’t too happy about it.

The Rangers shot 58.2 percent (39-of-67) overall and 68 percent (34-of-50) from inside the arc, outscoring the Dragons 66-30 on points in the paint, going 33-of-45 on layups; the Dragons were just 15-of-33 in the paint. They’re going to need someone to step up as a post presence with Austin Williams having graduated, but that offensive option wasn’t quite there on Monday. Navy transfer and 6-8 redshirt sophomore James Butler (2 points, 4 rebounds), who was just 1-of-5 from the floor, and 6-10 redshirt freshman Timmy Perry Jr. (2 points, 5 rebounds), who was 1-of-3, are the two best options to step up.

There are seven new faces on the Drexel roster, a group we broke down just before the trip. All seven saw the floor on Monday night, as all 13 scholarship players on the roster got at least one minute of action, but several in particular were out there much longer. Zach Walton, a 6-6 wing and transfer from Edmonds (Wash.) CC who had averaged 20 points at the JUCO level, kept that up with a game-high 22 points, hitting 8-of-15 from the floor and 3-of-4 from deep, along with four rebounds, two assists, four steals and just one turnover; not a flashy ball-handler, Walton took open shots and knew how to use the one-dribble pull-up, getting to the hoop mostly in catch-and-rip situations. Walton and redshirt sophomore Sam Green (3 points, 2 rebounds) are the Dragons’ only true options at the ‘3’, and while Green makes his way back from a knee injury that cost him all but six games a year ago, Walton looks ready to make a big impact.

Also debuting well was freshman Camren Wynter, who saw 18 minutes of action. The slender 6-2 combo guard came in and knocked down a turnaround jumper in the lane, stepped out for two 3-pointers (on five attempts), grabbed five boards and dished out two assists against one turnover, though he did pick up four fouls along the way. Also playing well in 22 minutes was Cal Poly grad transfer Trevor Johns, a sharpshooter who had 11 points on 3-of-8 shooting from deep, and he also grabbed seven rebounds as he was all over the court.

3. Demir looks in for a sizeable jump in production

A welcome surprise for Drexel last year when he averaged a tad over 10 points and five rebounds in his first season of Division I basketball after one year at the JUCO level, Alihan Demir is now an established presence on the Dragons’ roster. And they featured him early and often on Monday, getting the 6-8 forward involved in the offense on just about every possession out of the gate. Though he slowed down in the second half, finishing with 12 points, seven rebounds and three assists in 22 minutes of action, it’s clear that in the slower collegiate game, he’ll be a major x-factor as Drexel hopes to improve on its 13-20 record of a year ago. The Turkish big man is the most versatile player on the roster with his ability to play the point forward, take slower forwards off the bounce and stretch the floor (3-of-5 from deep), and the combination of him and point guard Kurk Lee (9 points, 8 assists) will be a nice pick-and-roll/pop duo for the next couple years.

-- The starting lineup featured Demir, Lee and Harper, as expected, but the other two spots were less known; Walton’s selection wasn’t a surprise, but it was a bit of one to see redshirt freshman Perry Jr. out there as well. The 2016 Cherry Hill East grad, who did a prep year at the Phelps School (Pa.), took a redshirt last season for development reasons and didn’t participate in an open practice on Wednesday due to injury, but that didn’t stop him from finally making his Drexel debut. Long-term, he’s likely Drexel’s answer in the middle, with length and athleticism that will benefit him in the CAA, but there’s going to be some growing pains along the way.

-- Sophomore forwards Jarvis Doles and Tadas Kararinas played fewer than five combined minutes, combining for no points and no rebounds. Spiker went with a much more guard-heavy lineup in this up-and-down game, and though it looks like Walton and Butler will take some minutes from the pair, still look for them to get more involved during the regular season when the games slow down a bit and the two stretch-bigs can get settled in. But if they’re not producing, there are now other options for Spiker and his staff to turn to.

-- Don’t want to go without mentioning Troy Harper, who scored 20 points for Drexel in 25 minutes of action. The fifth-year senior guard, who transferred from Campbell after his sophomore year, did what he does best, getting to the hoop and to the foul line, though he was 7-of-15 from the floor; he did, however, shoot 3-of-5 from deep after making only 15.9 percent (7-of-44) from deep last year. As a freshman at Campbell, he was a much more respectable 36.8 percent (25-of-68) on 3-pointers. Let’s see if this is the beginning of a trend back in the right direction.