READING, Pa. — The Hoop Group’s first Elite Camp of July brought over 600 high school basketball players to Albright College for a week of competition and recruiting exposure. After Tuesday’s tryout games, the camp was put onto their official teams Wednesday, with the college coaches arriving throughout the day and Division I coaches allowed in for the evening sets.

Here’s Part 1 of a notebook from Thursday’s action, which featured games on seven courts in front of the college coaches all day long; Part 2 will be up in a bit: 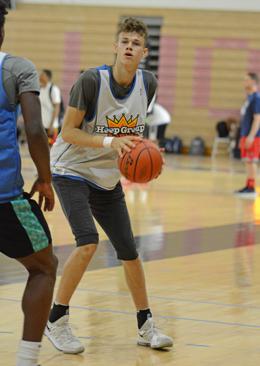 Kasean Pryor (above) sprouted from 6-0 to 6-8 in the span of two years. (Photo: Josh Verlin/CoBL)

Kasean Pryor (2019/Ann Arbor Pioneer, Mich.)
It’s a story you might have heard before: an average-sized guard gets a massive growth spurt, and becomes an intriguing skilled case.

That’s the case with Pryor, who entered his high school years a 6-foot-tall guard, and now finds himself standing a shade over 6-8 and still growing as he enters his final summer of AAU ball. So that’s why the lanky, mobile and athletic wing forward has the ability to put the ball on the ground and shoot from deep like a guard, though he’s also learning to play inside as well.

“I can do everything, I’m very versatile,” he said. “I can bring the ball up, play ‘D’, rebound, do whatever you need me to do.

“I think I can play the 1’ through the ‘5’ honestly,” Pryor added. “I feel like I can play good enough on-ball defense on any guards, I’m long enough to guard any of the longer people just like me and I feel like I’m very versatile, my versatility is very high, as I can do a lot on the floor.”

Pryor picked up his first few scholarship offers this spring, from Central Michigan, Hartford and NJIT, with Robert Morris coming along in June; Wagner, Towson, Ohio, Cleveland State, Southern Illinois and Portland have also been in touch. On Thursday, Temple coach Fran Dunphy was courtside at both of Pryor’s games.

Thanks to his father, basketball coach Sean Pryor, changing jobs several times -- going from D-I Chicago State to New Mexico Highlands and now to Eastern Michigan -- Pryor has traveled quite a bit already in his high school years, spending his freshman season in Chicago, his sophomore year at Las Vegas Robertson High School in New Mexico and then back to Ann Arbor as a junior, by which point he stood 6-7 and according to MLive.com averaged 14 points and nine rebounds per game for Ann Arbor Pioneer.

“I don’t really mind where I go [for college],” he said. “I’d like to stay maybe closer to home and Chicago, that’s where all my family is, but if I have to go somewhere far, that’s fine by me...I really just want the best fit for me, somewhere I can go in and get better, and hopefully go further than the college level, hopefully.” -- Josh Verlin

After a few conversations with collegiate coaches, Tinsley realized that he would need to overhaul his game if he had any hope of playing in college.

The Abington Heights senior stood at 5-10 in 7th grade, he said. At that point, he towered over many of his teammates and opponents. But now, his peers have caught up, and many have passed him in height.

“I am now realizing that being a big in college isn’t going to work out,” Tinsley said. “College coaches told me that.”

Now 6-5, Tinsley isn’t small by any measure. But his lack of center size meant that he was forced to learn to shoot, pass, and play like a guard. On Thursday afternoon, his versatility was on full display. The rising senior ran the point for part of the game, driving to the lane and dishing out multiple pocket passes to bigs in the paint.

Later in the set, he spotted up for back-to-back threes, and nailed both.

Defensively, Tinsley was able to match up against both bigger wings and smaller guards. His positional versatility has earned him four Division 1 offers, from Binghamton, New Hampshire, Colgate, and Holy Cross. He said that he’s received interest from a few Ivy League schools, namely Columbia and Dartmouth.

“My biggest strength is my ability to play multiple positions,” Tinsley said.

Tinsley is entering his final season at Abington Heights, after eclipsing 1,000 points in the final game of his junior season, the PIAA 5A state title game. -- Anthony Dabbundo 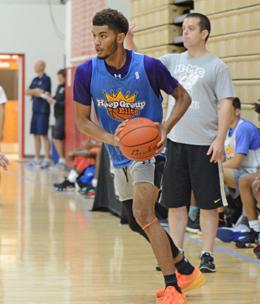 Gabe Perez (above) has picked up plenty of college interest this summer, before really making a varsity impact. (Photo: Josh Verlin/CoBL)

Gabe Perez (2019/Roman Catholic, Pa.)
In his first three years at Roman, one of the city’s hoops powerhouses, Perez scored a grand total of four points on the varsity level, all during his junior year.

Despite being 6-foot-3 and athletic, with a smooth outside shot, Perez played junior varsity ball and continued to bide his time, waiting for his varsity opportunity. That’s what happens when you play for a program loaded with future Division I talent like Allen Betrand (Towson), Seth Lundy, Hakim Hart and more.

“It was definitely tough, you know, but I just kept my head about it and my coaches continued to believe in me,” the Overbrook native said. “Allen, that was my matchup every day in practice last year. Just making me tougher, making me a better player and yeah, it’s tough but you know what, I played the best players in practice, so when I come into games it’s even easier.”

This summer, Perez is finally showing what he can do in a much more public fashion, seeing plenty of minutes for Roman in various summer leagues while playing in camps all over the region that have gotten him out in front of college coaches.

Perez was especially happy to pick up his first scholarship offer two weeks ago, from Chestnut Hill College’s head coach Jesse Balcer, who’d watched him at Temple’s team camp and the Hoop Group team camp during the last weekend of June.

“It’s four years in the making, just working really hard for it, just happy that I was finally able to get one,” he said. “Him and his coaching staff…were telling me they loved how I played and I was everything they want to build in their program.”

Chestnut Hill isn’t the only school that’s shown interest in Perez this summer. He’s hearing from D-IIs Bloomsburg, Seton Hill and LIU Post plus a laundry list of D-IIIs including Arcadia, Hood, PSU-Abington, PSU-Harrisburg, Moravian, Montclair State, Dickinson and Randolph-Macon. Perez shot the ball well in a game on Thursday afternoon, knocking down several 3-pointers and grabbing a handful of rebounds, playing a little point guard but mostly working off the ball.

But mostly, he’s looking forward to this winter, when he’ll finally be part of the Roman rotation, getting major minutes -- if not starting -- for a talented Cahillites squad that’ll be defending it’s Catholic League crown under third-year head coach Matt Griffin.

“I understand that it’s a line and you’ve got to wait, and I waited my turn and now it’s my time,” he said, “so I’m happy about that.” -- Josh Verlin

Cameron Brown (2019/Eleanor Roosevelt, MD)
This July has brought sweltering heat into the northeast. And few players have been as hot during this summer  than Cameron Brown, who has seen his offer sheet balloon to 12 Division I offers, with potentially more on the way.

Brown is one of the top defenders at the camp, using his lateral quickness and foot speed to stay in front of opposing guards. On Thursday, Brown could be found guarding the opponent’s best player, a challenge he willingly accepts and welcomes. He dove across the hardwood for loose balls, and he fought through traffic to grab rebounds.

“I like to guard the best player,” Brown said. “...All my teammates knew I had it in me, I think my confidence is building up.”

His improved confidence, along with a solid handle, has paved the way for him to shoot up the scouting boards. He got to the rim with ease on Thursday afternoon, and picked up multiple baskets off of transition and second chance points.

The rising Maryland senior has picked up nine of his 12 offers in the last three months. He has visited VCU, Radford, Siena, Loyola, and Mount St. Mary’s, all unofficially.

“I’m trying to see where I am at the end of the live period,” Brown said. -- Anthony Dabbundo
~~~

-- Conor Regan keeps growing, and it appears that his offer list will be growing soon too. Regan has sprouted from 5-11 to 6-4 in one calendar year, and according to his doctor, he might not be done yet. After getting an x-ray done on his sprained ankle a couple months ago, Regan said that his doctors told him he may still grow another inch or two. With the extra size has brought about an improved rebounding and interior game for the Gloucester Catholic sharpshooter. In the afternoon set, Regan hit consecutive threes off the dribble from a few feet beyond the line. He has received any offers yet, but has D-II interest from Chestnut Hill College and USciences.

-- Rising senior Tyler Crespo admitted that he doesn’t like showcase camps because they are not where he is at his best. He said he knows his role, and that is to be an excellent shooter and facilitator. In a camp that features a lot of isolation and one-on-one battles, Crespo still found a way to make his mark on the afternoon session. The 5-9 guard proved his importance to any offense on Thursday, getting to the basket, dishing to open shooters, and knocking down three pointers himself. He’s picked up one Division I offer thus far, from Marist. Crespo will be a four-year starter at Manheim Township, and is a key leader of a team returning its entire starting five next season.

--With the first July live period marching on, Jalen Gorham is still searching for his first Division I offer. As a 6-foot-6 wing that is a solid scorer at all three levels, there is no lack of interest. The rising senior at York County Day is hearing from the likes of Ivy and Patriot League schools as he pursues high-academic options. On both Wednesday and Thursday at Albright College, Gorham made the game easier for his teammates -- using his speed and length to create separation and rebound at a high level.