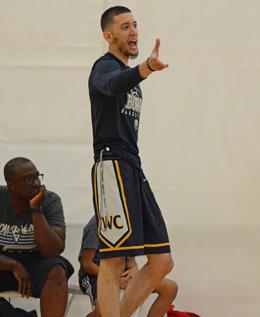 Ten years after Miguel Bocachica graduated from Imhotep Charter and left for college in pursuit of furthering his basketball career, he is once again leaving his alma mater for the same reason, though for a different opportunity.

Bocachica, 28, spent the previous three seasons as an assistant at Imhotep, returning to the school where played his senior high school season after three years at George Washington.

His playing career then took him all over.

First, there was a two-year stop on the team at LIU Brooklyn, sitting out his first season and then appearing in nine games as a redshirt freshman. For the 2010-11 school year, the 6-6 guard/forward transferred back to the area, playing in 26 games and averaging 5.9 points per game for West Chester.

After that, Bocachica moved on the University of Great Falls -- now the University of Providence (Montana) -- for two seasons. The final stretch of Bocachica’s playing career came in Puerto Rico’s Baloncesto Superior Nacional (BSN) for the Santurce Crabbers (Cangrejeros de Santurce), the same league in which his father, uncles, and grandfather played in.

After the whirlwind of his playing career, he settled back in his hometown and joined Imhotep’s staff in the middle of the 2014-15 season.

“I’ve had teammates always tell me that I’d be a coach one day. I’ve been the best player on a team, I’ve the middle guy, I’ve been the guy that doesn’t play, I’ve played every role,” Bocachica said. “I just love to teach more than I love to play. I used to say if I could do half the things I tried to teach, I’d be pretty damn good.”

All of those experiences as a player, as an assistant coach at Imhotep, and being a head coach for the AAU program K-Low Elite for the past three summers are now culminating into Bocachica’s new role as head coach at West Catholic.

The mid-June hiring of Bocachica came nearly a month after former head coach Jason Hasson accepted the head coaching job at Calvert Hall (Md.). Hasson finished his two-year tenure with a 13-33 overall record and 6-20 record in the Catholic League.

The poor results aren’t out of character in West Catholic’s recent history. The program hasn't had a non-losing record in league play or overall since going 10-6 against PCL opponents and 16-11 overall in 2008-09. Beyond that, the seniors will now be adjusting to their third coach in their high school careers.

Those seniors include senior guards Imere Harris and Samier Kinsler who are both able to light up the scoreboard. Harris led West Catholic in scoring last season with 16.4 points per game. As for the frontcourt, rising sophomore Zaakir Williamson is coming off an impressive freshman campaign where he averaged 10.3 points per game.

Despite having familiarity with Harris from the guards’ days with K-Low Elite, the roster remains mostly new to Bocachica. The challenge remains for him to put this talent in a position to be competitive in the Catholic League after years of finishing in the bottom half of the now 15-team league, but the new coach knows that it’s a process to put his program and these players on the same page.

“Every time you get new kids, you’ve got to figure them out individually before you give them something as a whole,” Bocachica said, “I’m going to have expectations and they’re all going to be expected to do the same exact things. I won’t sugar coat anything for them, I won’t cater to one kid, and I think they see that which is why they respect me, it’s not about one kid, it’s about the program and they feel it.”

One of the first things people will notice about Bocachica’s brand of basketball is the intensity and energy at which his teams play.

At Temple’s team camp the last weekend of June, Bocachica showed off the energy he’s displayed at his previous coaching stops, constantly patrolling the sidelines, getting into defensive stances and making sure his team was also involved, with “defense” chants and cheers at every bucket. Even when his team was up big at the end of one game, Bocachica didn’t stop, didn’t cease driving home the point he wanted to make.

In terms of basketball, the West Catholic program has some work to be done, but Bocachica has seen firsthand how an elite program in Philadelphia operates over the last three years at Imhotep. During his three full seasons as an assistant, the Panthers went 86-10 and won two state titles.

While he acknowledged that it was a difficult decision to leave Imhotep given all their success and his close relationship with his former coach Andre Noble, it was clear to both of them that this opportunity was one Bocachica could not pass up on.

“[He’s a] super energetic guy, that’s going to work really, really hard. He has a great mind for the game. He’s also a great skill developer guy,” Noble said of his former assistant, “Miguel can coach, he’s a really good coach. I know he’s going to bring a lot of energy and passion, I’m obviously very happy for him.”

Sometime in the future, Bocachica hopes that his team can square off against his former school to see how they stack up.