Here’s a notebook from the weekend:
~~~

Archbishop Wood’s John Mosco calls it “the next wave.”

With Andrew Funk (Bucknell), Tyree Pickron (Quinnipiac), Karrington Wallace (CCSU) and Seth Pinkney (prep school) all graduating from the Warrington (Pa.) Catholic League school, the Vikings’ sixth-year head coach is ready to turn his program over to an impressive group of rising sophomores.

As many as six young athletes who just finished their first years of high school are vying for playing time on the varsity roster, including three who will likely be starters. Only one senior, wing Julius Phillips, will be in the rotation, along with two juniors (Chris Garland and Brendan Kersey). After that, it’s all underclassmen.

The sophomore with the most experience of the group by far is point guard Rahsool Diggins. A 6-1 guard with long arms, Diggins started his entire freshman year, averaging 5.7 ppg for a team that went 13-10 overall, including 8-5 in the PCL.

But was he ready to take a leadership role as an underclassman?

“Heading into the [Mayfair] spring league, I would have said no,” Mosco said. “But we lost to MCS in triple-overtime and I saw things that he wasn’t doing all year. He stepped up to lead...making two foul shots with no time left to put us in overtime, stuff like that. He’s talking more, grabbing players and leading them that way, he’s not just playing.”

The only other rising sophomore who saw significant minutes last year is 6-5 wing Daeshon Sheppard, who’s been playing much more confidently and aggressive this offseason after chipping in a couple points per game as a freshman.

“He’s been playing really well, jumping out of the building,” Mosco said. “He’s learning to get the ball and not just hang around the perimeter; when he’s playing downhill, it’s hard to stop him, he’s got a nice frame.”

In the post, 6-5 Robert Jackson might jump into the starting lineup for his sophomore season, after playing only a few spare minutes without scoring a point as a freshman. Also looking likely to break into the rotation are John Donahue, a 6-6 forward who can stretch the floor out to the 3-point line, and 6-4 wing Muneer Newtown; Mosco’s son, JD Mosco, has also been seeing time this offseason.

Two seasons removed from the school’s first Catholic League championship, the Vikings’ youth might keep them from that goal this year, but the pieces are in place for another run.

“I’m telling them, playing all these games, ‘I want to win, but I want to see you guys compete, learn how to win,’’ Mosco said, “and I think that’s what we’re doing throughout the summer. We’re winning some games, losing some games, but they’re competing as it goes on.” 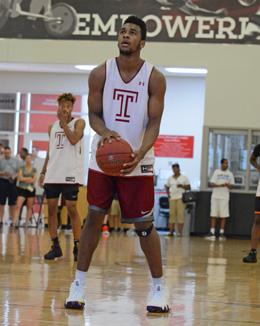 One major decision that Imhotep Charter (Pa.) senior Donta Scott will have to make regarding his recruitment is whether to stay home or not.

The multi-talented wing guard is being pursued heavily by half the City 6, with Temple, La Salle and Saint Joseph’s all putting him (and his high school teammates, Dahmir Bishop) at the top of their wish lists for 2019. And it’s not tough to difficult to figure out why: at 6-7, with a college-ready body and versatile game, Scott has the ability to come right in and help out any of the three, but they’ve got plenty of competition from outside the Delaware Valley to fight off.

Maryland offered Scott at the end of June, a month after Georgetown; Scott is also hearing from South Carolina and recently Ohio State, both of whom are trying to get him on campus.

Scott is coming off a season where he was named PIAA Class 4A Player of the Year after leading Imhotep to its second consecutive PIAA title, though his stock on several national rankings still dropped. But he’s revitalized that with a strong spring and summer.

In playing with the Philly Pride AAU organization on the Under Armour circuit, Scott averaged 13.4 ppg and a team-best 7.6 rpg, hitting 45.7 percent of his shots and 76.5 percent from the foul line. Several more performances like that in July, including at the UAA championships in Las Vegas, could make his recruiting picture even more complicated.

“I’m always looking for new offers,” he said. “After my AAU season, I’ll probably start cutting them down.”

Talented junior Lane coming to Perkiomen
After spending the last two years at the Hun School (N.J.), Niels Lane is ready for hoops on the other side of the Delaware River.

For his junior season, Lane will be headed over to the Perkiomen School (Pa.), where he’ll play for former St. Anselm star Tom Baudinet at the Pennsburg boarding school.

“I just feel like the competition over there is great, and my new coach is a basketball junkie,” Lane said. “He played in the D-League, played overseas and I’ve been to a few of his workouts, I just feel like I can get better with him coaching.”

A 6-4, 185-pound combo guard, Lane comes to Perkiomen far from an unknown prospect. He’s already got five offers, with Drexel and Rider most recently adding to a list that already included Providence, Penn and UConn.

His phone was plenty busy on June 15, the first day that rising juniors could be contacted directly by Division I coaches. It started with a 1 AM call from Marquette assistant Dwayne Killings, and continued with schools like VCU, Cleveland State, Purdue and more.

Like the rest of his classmates, he’s happy to soak in all the attention he can get.

“I know it’s probably going to become very stressful at one point,” he acknowledged, “but right now I’m just trying to enjoy it, and I just want to keep getting better so the calls keep coming.”

Lane’s only college visits so far have been to Drexel and Rider, picking up offers from those two on his recent trips to see their respective campuses. He said he’s considering a trip to Marquette in August, and also mentioned wanting to see Cleveland State and VCU.

With above-the-rim athleticism and a promising frame, Lane looks like he has plenty of upside left in his body, though he knows he’s got to begin maximizing his skill-set in case he’s topped out at his current height.

“Right now, I’m working on becoming more of a point guard, because you always have got to play both [guard positions],” he said. “So I’m working on my 3-point shot, my ball-handling and just becoming an all-around player.”

-- Haverford School’s Jameer Nelson Jr. put on an athletic display Saturday morning, throwing down a few high flying dunks while scoring 19 points in his team’s 58-47 victory over Cherry Hill East. The son of the former Saint Joseph’s star and current NBA guard was impressive on both ends of the floor, locking down ball handlers defensively while scoring easily. By day’s end, the rising senior picked up an offer from La Salle, whose staff he had impressed at the previous weekend’s team camp.

The Explorers became the third team to offer the 6-foot guard this month, joining Rider and Siena as his current college options -- also on the table is going somewhere for a prep year following his Haverford School graduation next spring, and becoming a member of the class of 2020.

-- Don’t be surprised to see La Salle College HS senior Konrad Kiszka in the Ivy League next fall. The 6-6 wing is being pursued heavily by Princeton and Brown, which he’s both visited unofficially in the last month, as well as a list of schools that includes Columbia, Lafayette, St. Mary’s (Cali.), Loyola (Md.) and William & Mary. For now, though, he’s focusing more on adjusting to new La Salle head coach Mike McKee and his system; with fellow rising senior and D-I commit Zach Crisler away for the weekend, Kiszka was able to show what he could do with an impressive string of performances that saw him attacking the basket aggressively while also not hesitating to rise up and knock down 3-pointers off the catch. He’ll be playing with East Coast Power at regional live period tournaments this July.

-- A pair of Coatesville natives and rising juniors are both getting plenty of Division I interest since the June 15 deadline when college coaches could start contacting them directly, but both Deuce Turner (2020/Malvern Prep) and Jhamir Brickus (2020/Coatesville) are still waiting on their first official offer. Both were at Temple playing with their respective AAU teams, Turner with Team Final and Brickus with WeR1. Turner, a 6-3 shooting guard, has heard from Penn State, Temple, Siena, Princeton, Loyola (Md.), Delaware, St. Joe’s & La Salle; he’s already visited. St. Joe’s and is looking at potential visits to PSU, Delaware and Princeton in the near future. Brickus, a 5-11 point guard who visited St. Joe’s with Turner, has heard from Siena, VCU, George Washington, Holy Cross, Cleveland State and Delaware in addition to SJU.

-- West Catholic’s Samier Kinsler was all over the floor on Saturday morning. The 6-foot guard filled up the statsheet, scoring 20 points, grabbing five rebounds, four steals while dishing out four assists. Over the past few weeks, the rising senior has begun to see an uptick in recruiting with D-I Dartmouth, D-IIs LIU Post, East Stroudsburg, and Chestnut Hill and D-III Moravian all reaching out. Fellow senior Imere Harris was also able to score in bunches for the Burrs, adding 18 points in the Burrs’ 64-46 win over Overbrook. The duo of Kinsler and Harris is going to be key for West Catholic as they start fresh with new head coach Miguel Bocachica and attempt to turn the program around. As for Overbrook, senior guard Khalif Washington started slow, but got going in the second half to finish with 18 points to lead the Panthers.

-- With his entire starting backcourt from a year ago off to college, Plymouth-Whitemarsh head coach Jim Donofrio is figuring out just who’s going to get the Colonials into their offense -- and who will get the ball into 7-2 rising senior Naheem McLeod. Right now, that job has gone to Caelin Peters, and the rising junior looked the part this weekend. A somewhat-deep reserve for P-W last year, Peters is an athletic 6-2 left-hander with a smooth shot off the bounce, but he showed strong instincts this weekend as a ‘1’, making good reads off the pick-and-roll and working the ball inside to McLeod with both easy post feeds and more difficult passes on the move. With senior Anthony Straface gunning threes and McLeod plus 6-8 Jason Cherry inside, Donofrio will once again have the pieces necessary to compete for Suburban One League, District 1 6A and even PIAA state titles.