The St. Joe’s commuter team camp took place this past weekend, with 28 teams -- 27 from the tri-state area and one from Puerto Rico -- coming to Hagan Arena and attached practice facility for six games over the course of three days.

Here’s Part 1 of a notebook from the weekend; Part 2 can be found here: 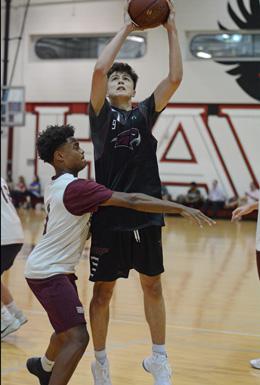 Chris Arizin (above) and St. Joe's Prep are adjusting to the loss of three scholarship seniors from last year. (Photo: Josh Verlin/CoBL)

Change is brewing for Saint Joseph’s Prep, and that’s nothing new over on West Girard.

Yet head coach Speedy Morris and assistant coach Randy Monroe, with many decades of coaching experience between the two of them, are used to losing top talent.

“Teams lose great players every year,” Monroe said. “It’s time for somebody else to step up and have an opportunity, that’s how you have to look at it.”

There’s certainly plenty of opportunity for new players to step up with three vacant starting spots, and while going 4-2 at the team camp this past weekend, the Hawks gave some indication of which players might scoop up the available minutes in the rotation.

The Hawks return a pair of starters in Trevor Wall, a 6-foot-2 junior who played more of a complementary role last season, and Gabe Arizin, a 6-4 senior wing. While Arizin was away on Friday and Saturday, Wall shined as the team’s primary ballhandler, showing a cool demeanor while both facilitating offense for his teammates and consistently getting to the rim on drives.

Recent Princeton commit and 6-11 senior Jacob O’Connell excelled in the post at Hagan Arena on Friday, further evidence that he’s primed for a big year with Croswell gone. He’ll have to be on his game this season, as he’s the only true 4 or 5-man the Hawks have.

Sliding into that power forward or stretch-four role will be a combination of Arizin and his younger cousin, 6-3 junior Chris Arizin, whose versatile skill set was on display all over the court in the first set of team camp.

“More than likely [the Arizin's will] probably play wing roles and they’ll help out with rebounding,” Monroe said. “Those guys have a good feel for the game, and they’re pretty good players.”

The younger Arizin will be one of a number of Prep players taking on sizable varsity roles for the first time, and he’ll be joined by sophomore Jimmy King, a 6-1 sharpshooter, and 6-2 senior Danny DiSandro, who both Monroe and Chris Arizin agree has the chance for a breakout year.

St. Joe’s seems to have put together a very cohesive unit heading into the summer, and though the team may lack in star power and experience, the Hawks are optimistic about a return to the Catholic League playoffs.

“We don’t have as many loaded offensive guys, but I think we make up for it with our ball movement and everything else,” Chris Arizin said. “I think we’re going to do some damage this year.” -- Zach Drapkin 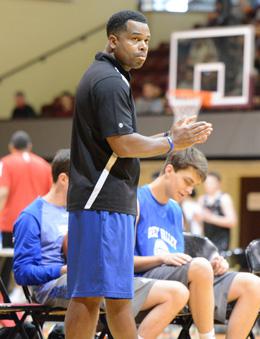 C.J. Savage (above) takes over Great Valley's varsity squad after a decade as an assistant. (Photo: Josh Verlin/CoBL)

Savage takes over at Great Valley

The Great Valley coaching staff won’t be too different this fall. It’s the positions on the bench that’ll be more of a significant change.

Paul Girone stepped aside this offseason after four seasons as the Patriots’ boss, but he’s sticking around the program after handing the reins off to C.J. Savage, who takes over his first head-coaching gig after 10 seasons as an assistant coach under Girone and Jim Nolan.

So it was still Savage and Girone on the bench at St. Joe’s all weekend, and though both took their turns in the huddle, there’s no doubt who was in charge.

“It’s fun having him on the bench, because this is our fifth year together and it’s been a blast just coaching with him as an assistant and I’m thankful to have him there,” Savage said. “It’s great, he can not yell as much and get involved with the refs as much, he can just sit back and relax and watch the plays a little bit.”

A native of Temperanceville, Virginia -- located on the state’s Eastern Shore just below the Maryland border -- Savage went to Fayetteville State, where he was the top 3-point shooter in the CIAA before he said his brother Andre’s unexpected death caused him to withdraw from basketball.

Savage found his way to Pennsylvania, where he began coaching the Great Valley 9th grade team in 2007-08.

By the time Mikal Bridges arrived at the school as a tenth grader in the summer of 2011, Savage was a varsity assistant under Nolan, helping develop the future Villanova wing and soon-to-be NBA Draft lottery pick. He stayed on staff when Nolan stepped down following Bridges’ graduation in 2014 and Girone took over, and now gets to be in charge.

“It’s a mixture of Jim Nolan and Paul Girone over the years...a combination of both offenses into one,” Savage said. “We’re running a lot of the things that we’ve been running, but we’re adding a lot of things, also. Just to get the guys to play quicker, play faster at times and at times to slow it down and run offense, gauging on the momentum of the game and how we’re playing.”

Point guard Matt Porreca, wing Liam Ward and forward Nate Graeff are all gone from last year’s 16-10 team, which captured the Ches-Mont American championship with a 10-1 league record. Though the Patriots are still in a search for a point guard, much of the offense this weekend ran through 6-4 rising senior forward Jake Prevost, the school’s starting quarterback on the football field and a versatile player on the hardwood.

Fellow senior Gavin Frankenheimer will also handle a large portion of the scoring load, though Prevost was doing everything from running point to posting up and crashing the glass.

“He’s doing a lot for us,” Savage said of Prevost. “His game has improved a lot this year.” -- Josh Verlin 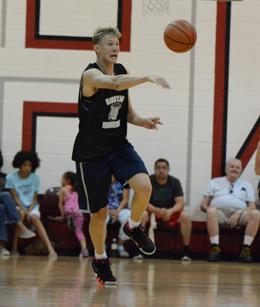 Quick Hits
-- Across the bridge in South Jersey, keep an eye out this fall for a Bishop Eustace squad that’s added a good bit of youthful size this offseason. Bob Falconiero’s Crusaders, coming off an 18-10 season that ended with a two-point loss to St. Joe’s-Metuchen in the South Jersey Non-Public ‘A’ quarterfinals, looked plenty impressive on Friday night, knocking off Morris Catholic by 30-plus behind a trio of returners in senior wing forward Mattia Morini, senior guard Matt Kempter and junior point guard David Cross. But two newcomers make them really intriguing, and give Eustace one of the taller lineups around. Chris Tomasco, a 6-8 sophomore who spent last season at St. Joe’s Prep, is now back in his home state; much further from home is William Humer, a 6-7 wing from Sweden who only arrived in the states this year. The two connected several times, with Humer finding Tomasco on several late outlet passes which ended in emphatic dunks. Those two, plus the 6-6 Morini and 6-5 Kempter -- who was more comfortable with the ball in his hands than we’ve seen previously from the sharpshooter -- mean these Crusaders will not be small. Nor easy to beat.

-- At one point in The Haverford School’s easy win over Shawnee on Friday night, head coach Bernie Rogers had on the court rising senior Christian Ray along with a quartet of underclassmen: sophomores Christian Clover, Tyler Seward and Jaylen Stinson and freshman Jameel Brown. And though that might be one of the younger lineups used in the Inter-Ac -- senior guards Jameer Nelson Jr. and Gavin Burke will make sure the Fords’ starting lineup packs plenty of experience and punch -- it won’t be one of the weakest. Brown, a 6-3 guard, already shoots the 3-ball better than many of his older teammates and should jump immediately into the rotation, while the three sophomores should see their production increase after getting their feet wet on the varsity level a year ago. Add in the bruising 6-5 Ray and 6-5 senior Asim Richards, a future Division I football player who gives Haverford more bulk inside, and the Fords look like the favorites to repeat as Inter-Ac champs this fall.

-- Speaking of Inter-Ac champions, Germantown Academy saw its string of five straight titles snapped last year, with a senior-less lineup going 2-8 in the six-team league, and just 9-17 overall. But there’s plenty of hope for a step back in the right direction this year, led by rising sophomore Jordan Longino, who averaged 18.7 ppg as a freshman and has already picked up Rhode Island and Tulane offers this offseason. With Longino out for the weekend due to a death in the family, the Patriots got to show what else they have; rising senior Brian Basile and rising junior Luke Traina both showed their scoring touch as the Fords lost a game to Eastern (N.J.) on Saturday morning. Basile, a 6-5 forward, knocked down four 3-pointers with a smooth pull-up stroke, while the 6-2 Traina slashed his way to the bucket to finish in double-digit scoring of his own.