Here’s a notebook from the Widener team camp action on Thursday and the Penncrest camp on Saturday; for more Penncrest coverage, click here: 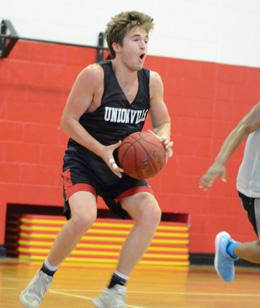 Bo Furey-Bastian (above) and Unionville had a strong showing at Penncrest this weekend. (Photo: Josh Verlin/CoBL)

First came a win over Bonner-Prendergast. Then one over Archbishop Carroll. And when Sean Rafferty’s layup sealed a comeback win over Conestoga -- about two hours after the senior hit the game-winning foul shots to beat Carroll -- it was clear: Unionville is on the rise.

“Going into this, I don’t think people thought we were going to win these games, or even compete,” rising senior Bo Furey-Bastian said. “But we know we can compete with anybody.”

That experience and maturity was clear on Saturday. The Indians were getting strong outside shooting from the entire rotation, with many of the looks coming off passes in second-year head coach Chris Cowles’ dribble-drive offensive attack.

“Before (Cowles) got here, it was a lot of isolations and 1-on-1s,” Furey-Bastian said. “He took that away right when he got here, and made us have a fluid offense where we swing the ball a lot.”

The Indians went 12-10 last year under Cowles, a step up an eight-win campaign the year before but not good enough to qualify for the District 1 6A playoffs’ 24-team field. But a slight drop in student population means the program will be in the 5A classification for the next two years, giving them a better chance to snap a seven-year streak without a playoff appearance next spring.

And with defending Ches-Mont champ Bishop Shanahan graduating four starters, and several other contenders having big holes to fill, the league looks wide-open heading into the fall.

“We want to win it all, pretty much,” Furey-Bastian said. “I think we could be the best team in the district. We just have to continue to work and improve every day.”

New-look Penncrest working out the kinks

It was on the bus ride home from Garden Spot High School, where Penncrest’s season had ended in the second round of the PIAA Class 5A playoffs at the hands of Northeastern (York), that Lions head coach Mike Doyle called junior wing Malcolm Williams up to the front of the bus.

The two-time defending District 1 5A champs were set to lose star guard Tyler Norwood along with valuable fellow starters Justin Heidig and Chris Mills, who were instrumental in setting the tone for the one of the state’s best defensive squads. And Doyle wasted no time in starting to prepare his team for the following fall.

“He tells me ‘Malcolm, Tyler’s gone next year,’ and he hands me his keys and tells me to hold them,” Williams said. “And he said ‘it’s your turn now.’

Williams, a 6-3 wing, is one of two starters back, along with 6-4 forward Matt Arbogast, a baseball star with solid hardwood skills as well.

If Penncrest is going to follow up on its two district titles and contend for another Central League crown, that whole group will need to buy into Doyle’s defense-first mentality and unselfish play. And Williams will have to step up in more ways than one.

“I just tell them to work hard and follow directions. Some of them need a little help on the plays, stuff like that,” Williams said. “Justin Heidig was the guy last year who would tell us what to do...now I have to do that.”

When he was just a freshman, Forrest Keys was the only youngster in a senior-laden Lower Moreland lineup. But he got quite the experience that season, as the Lions won 21 games, finished as the runner-up in the District 1 AAA tournament and then advanced to the state quarterfinals, where eventual champs Neumann-Goretti ended their season.

As the offseason gets underway, the now-rising-senior wing sees some similarities between that 2015-16 squad and the one that the Lions will field this winter.

“We’ve been playing for a while so we’re all used to each other,” he said. “We’ve just got to get that chemistry back a little bit, get into the groove of basketball, [and] get ready for a strong season.”

Last year, Lower Moreland won 20 games and the District 1/11 4A championship, though Overbrook ended its season in the first round of the state playoffs. But only one senior -- starting guard Dan Shimon -- graduated, meaning the Lions will return almost all of their production from an already-productive squad.

And they looked strong at Widener over the weekend, beating Archbishop Wood among several other area teams, going 4-1 in its appearance in Chester.

Keys is one of four returning starters, along with classmates Bryce Horn, Shane Cohen and Jordan Zoubroulis; Andrew Finnegan and Jake Himmelstein also return to the rotation, and will be in the mix to replace Shimon in head coach Seth Baron’s starting five.

This will certainly be the final year of hoops for Keys, a 6-foot-1 wing and the child of former Arcadia student-athletes Eric Keys (basketball) and Natasha Keys (field hockey). A standout on the football field, Keys is already hearing from several D-II and D-III programs for his abilities as a wideout/safety.

“We just want to get better,” Keys said. “We want to go further in states, farther in districts, win a district championship, get a banner. This is our last year playing high school basketball, [we’ve] got to make it worth it.”

-- Academy Park’s Tahriq Marrero looks like he’s set to become one of the more productive sophomores around. The 6-3 guard with a smooth outside stroke ended his freshman year on a high note, dropping 30 points in a loss to Chester in the opening round of the District 1 5A playoffs. And he was scoring at will at Widener on Thursday, hitting from inside and out.

“We want him to play the ‘2’ guard, play off guard, play point guard, do a little of everything,” AP coach Frank Wolf said. “He’s our everything guy, so that’s big. And as a sophomore, it’s big shoes to fill, but I think he can handle it. He’s ready to go. He’s good enough to do it.”

Shermek Lofton is the only returning senior for the Knights, who went 8-15 last year. Junior forward Kamrohn Roundtree (6-5), who wasn’t present this weekend, will also give them some big-time athleticism inside. Brothers Ibrahim and Bangaly Jabateh, a senior and junior respectively, will both make the jump up from the junior varsity squad, as will senior Tyree Estes; they were all the leaders of a JV team that won 17 games a year ago.

-- West Chester East has a solid trio to build around in senior guard Gibby Trowery and juniors Tym Richardson and Andrew Carr, who all bring something different to the floor. Trowery, a 5-9 point guard, runs the offense and can get to the rack; Richardson, a 6-2 guard, is a lanky scorer from all three levels who could break out if he maximizes his efforts; Carr is a 6-6 wing who plays inside for East but is a strong outside shooter as well. The Vikings went 9-14 last year, losing in the first round of the District 1 5A playoffs as the No. 15 seed in the 16-team bracket, but could find themselves hosting a game with a strong season this year.

-- Archbishop Carroll junior Tairi Ketner looks ready to hop into the main rotation for the Patriots and first-year head coach Francis Bowe. The 6-5 forward and son of former UMass big man Lari Ketner, Tairi is a bit undersized for a ‘5’ but has great hands and strong footwork, and he’s becoming a reliable scorer in the post. Bowe, who was just hired two weeks ago after six years at Valley Forge Military Academy, didn’t have his new team running anything specific, so Ketner’s touches were somewhat limited as the guards dominated, but he showed what he can do in spurts.

-- Central Bucks East rising senior Nick Roggio is hearing from a variety of Division III programs, including Swarthmore, Haverford College, Drew and Susquehanna, and he plans on visiting those schools as well as several others over the coming weeks and months. A 6-5, 225-pound left-hander, Roggio will be a key piece offensively this fall for Erik Henrysen’s Patriots, thanks to his ability to get to the rim from within 15 feet while also kick out to East’s various shooters. He does most of his damage going left, but said he’s working on his right hand this offseason as well as his speed and handle.