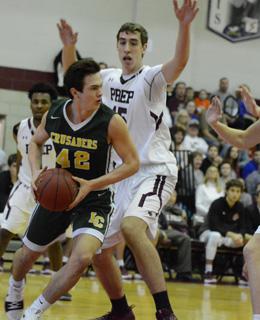 Jacob O'Connell (above) committed to Princeton this week after visiting the school on Wednesday. (Photo: Josh Verlin/CoBL)

Jacob O’Connell did not need to be sold on what Princeton could offer him academically.

The St. Joe’s Prep junior, a South Jersey resident who lives about an hour away from the campus, is well aware of the academic prestige of the Ivy League institution.

When he visited campus on Wednesday to talk to Tigers’ coach Mitch Henderson and his staff, he wanted to find out exactly how he fit with the basketball program.

Using a whiteboard and a dry erase marker, that’s just what Henderson showed him.

“I told them, ‘You don’t even need to sell me on the school, I already know all about that.’ I just wanted to talk basketball, see what they envisioned for me,” O’Connell said. “Coach Henderson literally went up to the whiteboard there and drew out exactly what they’d have me do in their offense.”

A day after the meeting, O’Connell committed to the Tigers.

The 6-foot-11 forward said Princeton became a front runner over several other Ivy League and Patriot League schools in January when he met with Henderson, but he did not initially expect to make his commitment so soon.

“They showed the most interest in me out of probably every school,” O’Connell said. “Really I was the kid that they wanted in my class. I’m the kid that fits their style of play perfectly. Obviously the school and the academics and all of that, that speaks for itself.”

O’Connell is one of the youngest players in the Class of 2019. He doesn’t turn 17 until September.

Sometimes he forgets just how much younger he is than some of the other kids in his class. Then the New Jersey forward remembers he still has more than three months before he can get his driver’s license.

A few weeks ago he was scrimmaging with former Penn guard Darnell Foreman, who is more than seven years older than him despite just graduating college this spring. The scrimmage was a reminder to O’Connell that his young age means he still has plenty of room to grow.

“I brought that up to the coaches and they said, ‘You realize Darnell’s like 23 right now. He’s seven years older than you,’” O’Connell said. “I’ll be out of college by the time I’m that age, but still [they said] just imagine how good you’ll be in three, four, five years during your sophomore, junior, senior year at Princeton.”

O’Connell transferred to St. Joe’s Prep last season after starting his career at Eastern (N.J.). His role was somewhat limited, with La Salle forward Ed Croswell dominating the post and Speedy Morris tending to go with four guards around Croswell, but O'Connell will be manning the middle as a senior.

He tallied 65 points on the 2017-18 season, scoring in just three of the team’s 13 Philadelphia Catholic League games. He had a league season-high eight points against Archbishop Carroll.

When O’Connell shared the floor with Croswell, who is headed to La Salle, he found himself open quite a bit. With plenty of space to work with, he knocked down open mid-range jumpers for the Hawks.

“One of the things I got to work on a lot this year during school was shooting the ball,” O’Connell said. “Obviously Ed was a really good back-to-the-basket player and a lot of teams would double down on him and leave me kind of wide open.

“I ended up taking a lot of foul line and elbow jump shots and probably scored the majority of my points off just that. That’s something that I got to be really, really good at.”

The Tigers’ coaching staff told O’Connell he might play a similar role to 2013 grad Brendan Connolly and current Princeton big man Will Gladson.

Connolly was a 6-foot-11 forward who started 55 games during his four-year career, including 29 starts for the 2011 NCAA Tournament team. Gladson is a 6-foot-10 rising junior who started nine games last season.

Princeton has been running the same offense since Hall of Fame coach Pete Carril was coaching at the university. A key to the offense, which is based off good screening, cutting, passing and spacing, is an intelligent big man with a multitude of skillsets.

O’Connell envisions himself as a perfect fit for the role.

“Princeton, for 50 years obviously they’ve been running the same offense, and it’s built around having a good big man who can pass, shoot, do other things that I can do,” O’Connell said.

St. Joe’s Prep finished classes a few weeks back. Now on summer break with his college decision behind him, O’Connell can enjoy the next few months of basketball. He is playing for the New Jersey Shoreshots this summer.

When he gets back to the Prep in the fall, he is excited to see what he and his teammates can do. Without Croswell, O’Connell will likely get more opportunities to get the ball in the post and show off some of his low post scoring and passing.

“I think that we have a chance to be honestly just as good as last year,” O’Connell said. “We’re losing our top three guys all scholarship guys, but if you look at the rest of the Catholic League, so are other teams...Everyone is losing people and everyone else who played any minutes at all last season besides those top three guys is coming back next season.”