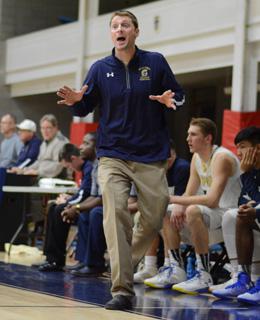 Francis Bowe let his first opportunity to be part of the Philadelphia Catholic League’s storied basketball history pass him by. As an eighth grader in 1998, Bowe elected to go to St. Pius X instead of Kennedy-Kenrick, picking the school closer to his Phoenixville home though it was the one of the pair that wasn’t part of the Archdiocese’s notable hoops league.

And though he helped Pius to three district titles in his four years, Bowe couldn’t help but wonder what might have been.

“I’m not going to lie,” he told CoBL by phone on Friday, “there’s always a little bit of me that’s like, ‘I wish I played in the Catholic League,’ because it’s the best league in Pennsylvania.

“I went to a ton of Kennedy-Kendrick games, I went to Carroll games...it’s just a legendary league, and of course you always want to play in the best league possible,” the 33-year-old added. “Now I get to coach in it, which is awesome.”

Twenty years after passing up the opportunity to be in the Catholic League, now he’ll finally get to leave his mark upon it.

After five years as the head coach at Valley Forge Military Academy, Bowe has taken his coaching opportunity. It was made official on Friday that he will be the next head coach at Archbishop Carroll High School in Radnor.

“It’s a job I’ve worked for my whole career, and was hoping I’d get an opportunity for it,” he said. “At this day and time, I never thought it would happen. I knew working hard for it would happen. But...I’m on cloud nine.”

Bowe takes over for Paul Romanczuk, who resigned last month, wanting to spend more time with his family after a successful 14-year run that saw him win a PIAA Class AAA state championship in 2009.

Though the Patriots were unable to snap a drought in the PCL playoffs that’s now seen them go 23 straight seasons since their last league title, they were routinely in the upper half of the powerhouse 14-team conference, going 20-8 (10-3 PCL) and making it to the league semifinals and the PIAA 5A quarterfinals this past season.

“I’ll tell you what, it’s some big shoes to fill,” Bowe said. “[Romanczuk’s] done an unbelievable job there, so there’s definitely a lot pressure I’m putting on myself.”

Bowe had a fair amount of success in five years at Valley Forge, where he built the school’s prep program into one of the best in the small-school Bicentennial Athletic League.

This past year, the Trojans went 24-6, winning the District 1/11 3A championship for the second consecutive season before bowing out in the second round of the state playoffs; the year before, they won 26 games and made it into the PIAA quarterfinals.

Before Valley Forge, the 2006 graduate of Gwynedd Mercy University -- then known as Gwynedd Mercy College -- had spent four years at Upper Merion, where he got his first head coaching experience.

But he’s taking a big step up going into the Catholic League, which has always been stocked full of hoops talent but has become a behemoth since joining the PIAA earlier this century, with even the teams at the bottom of the standings having multiple scholarship-level basketball players on the roster; at the top, programs like Neumann-Goretti and Roman Catholic are routinely churning out high-major Division I talent.

Last year, Catholic League teams captured the PIAA 3A (Neumann-Goretti) and 6A (Roman Catholic) championships, the third year in a row two PCL teams had won titles. In 2015, Conwell-Egan (AA), Neumann-Goretti (AAA) and Roman (AAAA) made it nearly a clean sweep in the old four-classification system.

Barring a change in the PIAA structuring into public and non-public divisions -- which in itself would take an act by the Pennsylvania legislature -- there’s no reason to think that type of statewide dominance will stop anytime soon.

Potential offseason player movement aside, Carroll is projected to return several strong pieces for Bowe to build around.

That begins with rising junior A.J. Hoggard, a 6-3 lead guard with multiple Division I offers and the team’s leading scorer (15.7 ppg) a year ago. Rising senior wing forward Luke House (11.2 ppg) also brings some scoring pop back to the Patriots’ lineup, but they’ll have to replace forwards Keyon Butler (14.5 ppg) and Devon Ferrero (6.5 ppg) plus guard Justin Anderson (12.9 ppg).

Bowe said he’ll meet with the team on Monday and go from there.

“There is a ton of talent...I definitely watched a lot of game tape on them,” he said. “I’m looking forward to get in the gym with them immediately.”