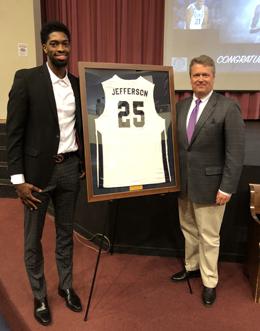 As Amile Jefferson watched the video of his career thus far projected up on the screen inside Friends Central’s Shallcross Hall, of a decade of hard work packed into the span of two minutes, it was impossible for him not to think about what it all meant.

“It just shows that it’s been a journey,” he said. “It’s been a long, fruitful, beautiful journey full of ups and downs, some lows, a lot of highs, and I’m thankful for it.”

And, he added with a laugh, “it’s letting me know that I’m getting old.”

Not that old. Not yet.

A 2012 graduate of the Main Line private school located on City Ave., Jefferson was back at his alma mater on Thursday morning to see his No. 25 Phoenix jersey retired. It will be hung up for good in the school’s Shimada Athletics Center, joining former Syracuse and NBA forward Hakim Warrick’s No. 21 as the program’s only two such honorees.

That’s quite a statement for the school to make about the 24-year-old, who just completed his first professional season with the Minnesota Timberwolves’ G-League affiliate, the Iowa Wolves.

After all, it was only a few months past six years ago that he was leading Friends’ Central to its fourth consecutive Pennsylvania Independent School (PAISAA) state championship, finishing up a prep career that saw him score over 1,500 points and grab over 800 rebounds before heading off to play for legendary coach Mike Krzyzewski at Duke.

“To be back here now so quickly -- it’s been 10 years since my first day on campus, but it seems like yesterday that I was here, that we were winning state titles, that I was graduating, that I was sharing countless moments with the students. To be back here right now, sitting in this seat that we had Meeting for Worship in every Wednesday, it’s truly amazing.”

To be sure, Jefferson has accomplished quite a bit on the court in a short period of time.
At Duke, playing for one of the true storied programs in college basketball, he set a new program record for games played (150), with 103 starts. He was a three-time captain for Coach K, a fan favorite for his affable personality and team-first mentality, a 6-foot-9, 220-pound forward who was willing to do the little things, even if he wasn’t the most skilled big man in the ACC.

And while he scored over 1,000 points and grabbed more than 940 rebounds in his five years at Duke -- he redshirted in 2015-16, playing nine games before a foot injury cost him the rest of the season -- it was another number that was pointed out by several others that most impressed the Friends’ Central crowd. That would be four, the number of times Jefferson was selected to the ACC All-Academic team, another Duke record.

“Academically he did unbelievable things at Duke, he has his masters from Duke, that’s the part I’m probably most proud of for him,” said Jason Polykoff, Jefferson’s former head coach at Friends’ Central and now the head coach at D-III Earlham College (Ind.). “Bbviously his accolades are great, but it’s how he’s really managed to keep a balance in his life that I think is the biggest part.”

Polykoff was one of several former coaches and teammates who returned to Friends’ Central on Thursday to celebrate, and many of Jefferson’s former teachers were also there to wish him well, doing so both before and after the 30-minute ceremony.

Jefferson didn’t have any prepared remarks -- “I didn’t know I was going to talk,” he said when he took the podium, as if the 400-or-so high school students gathered in the auditorium were there to hear anybody else.

But he had no trouble speaking for five minutes or so about his introduction to Friends’ Central as an eighth grader, about what he learned from an institution founded in the Quaker tradition in 1845, what he called the “conscience of the community” and its ability to accept students no matter where they came from or who they were.

He didn’t once mention basketball, or the NBA, not one second discussing Coach K or Cameron Indoor. Instead, Amile Jefferson spoke about life.

“It helps you to see the bigger picture,” he added, “and that is life is beautiful, and we are forever learning.”

After his remarks, Jefferson presented Friends’ Central’s Head of School, Craig N. Sellers, with his McDonald’s All-American Jersey, which will also remain at the school.

With the last 10 years in the rearview mirror, Jefferson’s focused on the next decade, where he’s hoping to stick on with an NBA roster.

He earned a late-season call-up to the Minnesota Timberwolves following an impressive season the Iowa Wolves, his first year making money playing hoops. In setting a G League record for double-doubles (36), Jefferson averaged 17.8 ppg and 12.9 rpg, making 62.5 percent of his shots.

But just how he didn’t bring up basketball to the Friends’ Central students, Jefferson didn’t mention the sport when talking about his future. He plans on putting to use his degrees in history (undergraduate) and religion (masters) at some point in his lifetime -- but for now, it’s about human capital.