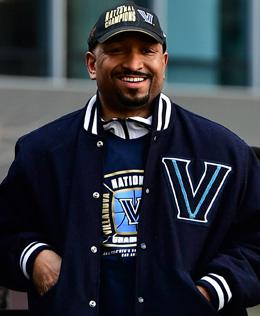 There were several good names on the La Salle coaching search list, but there was only one obvious one.

The hiring would likely have come even sooner, if not for the fact that Villanova was rather busy winning the national championship on Monday, returning to campus Tuesday and celebrating with a parade on Thursday. But just six days after the Wildcats handled Michigan to win their second title in three years, Howard the former Drexel guard and La Salle assistant, decided to become a head coach for the first time.

There’s no denying that it was the right decision for all parties involved.

Ask anybody around Philly hoops which area assistant coach was like to become a head coach, and Ashley Howard was the first name out of his or her mouth.

A CBSSports.com poll last August had Howard as one of the nine assistant coaches voted “most likely to become a coaching star” at some point in his career. Yahoo! Sports’ Pete Thamel had Howard fifth on his list of 12 assistants ready for head coaching looks this offseason. Like Baker Dunleavy, who left Jay Wright’s staff to take over the Quinnipiac job last offseason, it seemed almost inevitable that this was the year that Howard would make the jump himself.

So when La Salle’s head coaching job opened up, Howard’s name immediately came to mind as one of the top potential candidates. Former La Salle star Tim Legler, who had NBA playing and AAU coaching experience but none on a Division I sideline, became a hot name as well, and Bradshaw also brought in Duke associate head coach Nate James for an interview.

But there’s no denying all the intangibles Howard had, and as long as he wanted the job -- which clearly, he did -- then it was going to be his job to lose.

First, he’s local, a Philadelphia native and product of Monsignor Bonner High School, where he scored more than 1,200 points before graduating in 1999. Second, he’s got the hoops background, from his father Maurice Howard, who scored more than 1,100 points at Maryland (1975-79) and was a second-round pick of the Cleveland Cavaliers, playing parts of two seasons in the NBA. Third, he had La Salle connections, having served as an assistant at 20th and Olney from 2004-08, before he went to Drexel, where he spent four seasons, then was at Xavier for one before heading to Villanova in 2013.

And Howard has a motivating story of his own. After averaging 8.9 ppg and 4.9 apg as a college sophomore, the diagnosis of a heart condition meant he could no longer play competitive basketball. So instead of focusing on the NBA, he channeled his love for basketball into coaching.

Oh, yeah, and the fact that he coached on two national championship teams under Wright, developed high-level talent while at Villanova -- such as Jalen Brunson, Mikal Bridges, Ryan Arcidiacono, and others along the way -- and possessed numerous recruiting connections in Philadelphia and beyond didn’t hurt.

“Very, very good hire for them,” one anonymous Big 5 coach told CoBL. “I think they got it right.”

There’s no denying that the job Howard takes over isn’t an easy one. In the Atlantic 10 Conference, La Salle’s facilities and arena aren’t exactly at the top, and locally he’ll have to compete for recruits against the rest of the Big 5, Drexel, Penn State, and several other programs that have developed reputations for plucking up local players.

Success at La Salle isn’t impossible -- a 2013 Sweet 16 run is proof of that -- but it’s nothing guaranteed, as the five losing seasons since that run have showed. Giannini built a successful core that was a mixture of under-the-radar high school commitments (Jerrell Wright, Tyreek Duren) and transfers (Ramon Galloway, Tyrone Garland), but wasn’t able to find the right chemistry afterward.

If Howard can keep that group together, he can add them to a roster that includes junior Traci Carter, a Marquette transfer who sat out this past season, plus sophomores Saul Phiri (6.2 ppg, 4.8 rpg) and Isiah Deas (9.5 ppg, 4.4 rpg) and promising freshman big Miles Brookins (3.8 ppg, 1.9 rpg), he’d have a young-but-intriguing core to build around in his first few seasons.

So perhaps Howard won’t be able to accomplish in his first year exactly what Dunleavy was able to at Quinnipiac, when he guided a roster picked dead last in the 11-team MAAC to a respectable seventh-place finish, losing three road games in double OT and picking up two wins in the postseason, earning him consideration for league Coach of the Year honors despite the 12-21 record.

But that doesn’t mean that he’s in the wrong spot, or that Bradshaw made the wrong call. There’s no one else in better shape than Howard to get La Salle back to the spotlight.