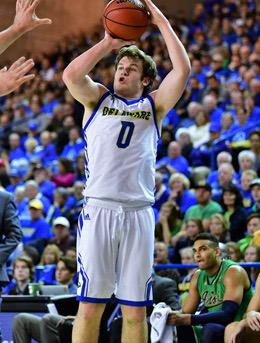 Ryan Daly has always had a strong connection to Saint Joseph’s.

Daly's maternal grandfather, Jim Boyle, was head coach at St. Joe's from 1981-1990. His father Brian Daly, a Monsignor Bonner standout, played in 103 games over a four-year career as a Hawks' reserve. His mother is a St. Joe’s grad and many other family members have a personal tie to the school as well.

So growing up, Daly went to games on Hawk Hill, watching players like Jameer Nelson, Langston Galloway and Pat Carroll.

After announcing his decision to transfer from Delaware on March 23, Daly, a 6-foot-4 sophomore guard, visited St. Joe’s this weekend. He said it was a little funny getting recruited by the familiar faces of Hawks’ head coach Phil Martelli and his staff.

During the visit, Daly was reminded of the time he spent at St. Joe’s as a kid and his family’s tradition at the program. On Sunday night, he announced on Twitter that he had decided to become a Hawk himself.

“I grew up loving St. Joe’s, going to a lot of their games,” Daly told CoBL. “It’s surreal. On my visit, I was going through and looking at pictures of teams I watched all the time, and knew it was the right spot for me.”

During his two years at Delaware, Daly played in 60 games, including 49 starts. The Archbishop Carroll grad averaged 16.7 points, 6.9 rebounds and 2.2 assists in his Blue Hens’ career. He totaled 1,000 points, becoming the 34th leading scorer in Delaware history. He also amassed 411 rebounds, 133 assists and 60 steals.

In Daly’s two seasons at Delaware, the first two of coach Martin Ingelsby’s tenure, the Blue Hens went 27-39 overall and 11-25 in the CAA. This past season the Blue Hens finished 14-19, 6-12 CAA for a seventh place finish in the conference before losing to Northeastern in the second round of the conference tournament.

“It was more of a personal thing,” Daly said of his reasons for transferring. “I just didn’t really fit in. I liked the school. I love coach Martin. I like my teammates, they’re my brothers. I just wasn’t as happy as I wanted to be, and I didn’t want to sacrifice my happiness to keep everybody else around me happy. I kind of just wanted to do it and went through with it, and I’m happy about it.”

After de-commiting from Hartford in March 2016 following a standout senior season at Archbishop Carroll, in which he won Philadelphia Catholic League honors, Daly held just two Division I offers from UMBC and Mount St. Mary’s. He picked up the offer from Delaware the same night Ingelsby took the head coaching gig.

When Daly re-opened his commitment this time, it was very different. For the past two weeks, whenever Daly checked his phone there were missed calls from area codes around the country. Daly said about 30 schools reached out to him. Some of the other programs included North Carolina State, Nevada, Temple, St. Bonaventure, Ole Miss, San Diego and Wofford.

The Hawks are coming off a 16-16 season, in which they went 10-8 in the Atlantic 10 Conference. They finished fourth in the conference and advanced to the A-10 semifinals.

St. Joe’s loses its top two scorers from last season in Shavar Newkirk and James Demery. The Hawks should have plenty of talent returning though. Sophomore Charlie Brown missed the entire year with a wrist fracture and junior Lamarr Kimble played just one game before a broken foot ended his season.

Daly will sit out next season due to NCAA transfer rules, but Brown, Kimble, freshman forwards Taylor Funk, one of Daly’s former AAU teammates, and Anthony Longpre’ and sophomore guard Nick Robinson should all still be around when he returns to the court in 2019-20. At the moment, St. Joe’s has one commitment to its 2018 recruiting class in Washington D.C. area guard Jared Bynum.

Daly was excited by what the roster might look like when he is eligible to enter the lineup.

“This team does have a lot of talent, and that’s one of the things that drew me into it,” Daly said. “There were some bigger names schools who might have called me, but I think St. Joe’s talent was probably the best of all the schools who called me. Health is the only thing that has delayed them the last two years.”