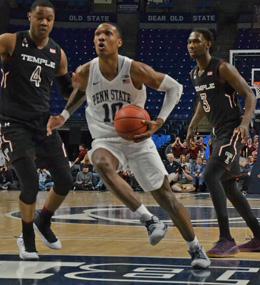 Tony Carr (above) declared for the NBA Draft and will hire an agent, he declared on Monday. (Photo: Maddy Pryor/CoBL)

It was last August when Tony Carr started taking seriously the notion that his upcoming collegiate season might just be his last.

That’s when the Penn State sophomore traveled out to Los Angeles to take part in the Nike Basketball Academy, a gathering of 20 of the top collegiate basketball players in the nation.

Playing with the likes of Duke’s Grayson Allen and Trevon Duval, Michigan State’s Jaren Jackson and Nick Ward, with former NBA stars like Gary Payton and Rasheed Wallace serving as instructors, Carr found himself fitting right in. And that said plenty to the Philadelphia native, who came to Southern California with high expectations already in mind.

“I’d thought this was going to be my last year, just the way that my body and my game was progressing,” he told CoBL by phone on Monday. “Once I just got out there and proved myself there, playing with the best college players in the country, that gave me an extra boost of confidence and then just gave me that boost going into the season to know that I could do some real damage.

“I actually actually spoke to [retired pro] Greg Anthony after one of the 5-on-5 sessions, he just told me that he was enjoying watching me play, so just to hear that from a guy like him...definitely meant a lot to me.”

He was clearly the standard-bearer for the Nittany Lions, who just missed out on the NCAA Tournament after going 19-12 (9-9 Big Ten) in the regular season and losing to Purdue in the Big Ten tournament semifinals but then ran through the NIT field to capture the championship over Utah at Madison Square Garden last Thursday.

Since the season ended, Carr’s focus turned to his future.

With Carr, the Nittany Lions would almost certainly be a top-25 team next year and have the program’s best shot at returning to the NCAA Tournament since 2011. But Carr realized that after the year he’d had, his draft stock was about as high as it was going to get.

So to him, the decision was clear.

“Making the tournament and being a top 25 team wasn’t weighing on my mind at all, I just wanted to make the best decision for me and my family and that was me putting my name into the NBA Draft,” he said. “my teammates definitely understood, they knew the kind of calls I would get and they knew what kind of year I just had, so they definitely were backing me 100 percent.”

And so on Monday afternoon, Carr sat at a podium in State College, flanked by his parents Tony Carr Sr. and Nicole Carr and Penn State coach Pat Chambers, letting everybody know that he wouldn’t be coming back to Happy Valley.

“I’m just super-proud of him,” Tony Carr Sr. said. “When he went to Penn State, I just wanted him to keep improving. I never got ahead of myself to look this far, because I didn’t want to cheat him and I didn’t want to cheat the game. But he’s always talked about his dream of going to the NBA since he’s six years old.”

Tony Carr Jr. had a standout four-year high school career in the Philadelphia area, first making noise as a freshman on Abington Friends in 2011-12 alongside classmates Josh Sharkey and Lamar Stevens. The trio went their separate ways after that year -- Carr to Roman, Sharkey to Archbishop Carroll and Stevens to the Haverford School.

Carr blossomed at Roman, going from a skinny 6-2 lead guard as a sophomore into a talented all-around weapon by his senior year, when he averaged 14.7 ppg and led Roman to its second consecutive Catholic League championship. That team, which featured future Nittany Lion teammates Nazeer Bostick -- who Carr credited during Monday's phone call for his decision to attend Penn State -- and Stevens, who left the Haverford School after his junior year, went on to also defend its PIAA Class 6A championship.

“[At] 6-2, you think, man, this kid really knows how to play, really smart, he’s not going to pay for college, that’s like your first thing,” former Roman coach Chris McNesby said. “Senior year, he turns to 6-4, becoming 6-5, now you’re like ‘wow, this guy has a chance to do something else beyond that.’ But really it was up to him over the last nine, 10 months to really take that next step.”

Should he get drafted and make a roster, Carr would be the latest in a line of Roman players who have gone on to play in the Association. Maalik Wayns was the last, playing in 29 games between 2012-14 with the Sixers and Clippers; others like Eddie Griffin (2001-07), Marc Jackson (2000-07) and the late Rasual Butler (2002-16) had lengthier stays.

On the heels of his breakout in the Big Ten and in postseason play, Carr is a safe bet to at the very least be among the 60 players selected in June’s NBA Draft. ESPN’s Jonathan Givony currently has Carr projected 41st, in the middle of the second round, and The Athletic’s Sam Vecenie slotted him 42nd in his most recent mock draft.

With Carr’s advanced feel in the pick-and-roll game and his potential defensive versatility at 6-5 both projecting nicely to the modern NBA, to go along with a proven track record of productivity, he’ll have a chance to work his way into the first round by June. At this stage, scouts indicate Carr must improve his efficiency as a scorer, while there are also questions about his athleticism and 3-point stroke translating to the next level.

Though Carr and his family said they weren’t looking at draft boards to help determine their decision, they did get similar feedback from people they knew who knew about the draft process. And so he’s jumping into the draft head first, his father saying that they were meeting with eight different agencies over the next four days before signing with someone soon afterwards.

“You definitely have to take advantage of something like this,” the younger Carr said. “For me to actually have that chance to chance it, I felt I would be doing myself a disservice if I didn’t pounce on this opportunity.”