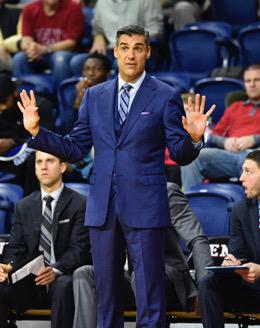 SAN ANTONIO -- The Michigan Wolverines may don the maize and blue, but John Beilein has been Jay Wright's kryptonite.

Back in Wright's Division III assistant coaching days at Rochester (N.Y.), Beilein was a Division II head coach at Le Moyne (N.Y.). Wright watched many of his highly desired recruits -- the ones that he had been working for throughout the year -- disappear at the sight of D-II scholarships from Beilein. The lack of scholarships at the D-III level left Wright to simply pray that Beilein wouldn't show up at the same high school gymnasiums as he did.

Aside from a challenging recruitment process in his first coaching gig, over time, Wright has also found Beilein to be one of the toughest coaches he's faced. Despite all this, they're pretty good friends.

"He'll still look like George Clooney, and I will look like Columbo by Peter Falk at the end of that thing," Beilein joked, when asked about which potential Hollywood actors would portray them in a movie. "There's your comparison. I'd like to say Kevin Costner, but I can't go there."

The two have grown familiar with each other over the years. Beilein even spent a few years competing against Wright in the Big East, when he was the head coach at West Virginia from 2003-07.

The two met six times during that stretch, with Beilein's Mountaineers winning four meetings. After he left West Virginia for Michigan, the Wolverines and the Wildcats have met only one time, back in the finals of the Legends Classic in 2014. Villanova was able to come out on top, but it was a close victory, saved by a last-second JayVaughn Pinkston block.

Neither Pinkston or any other player from that game will be playing, but Wright is expecting another tough matchup.

"They remind me of John's West Virginia teams," Wright said of this current 2018 Michigan squad. "[Moritz] Wagner reminds me of a modern-day [Kevin] Pittsnogle, thinned down, eating healthier, and a little more skilled. Just a really well-coached, disciplined team that you expect at this time of year. That's what you're going to play against, but also from John's team."

For Wright, he can flaunt his one national title, something that Beilein is searching for, but the Wolverines have the skills and talent to pull off the upset and bring a trophy back to Ann Arbor.

Leading the way is Wagner, a 6-foot-11 versatile forward. He's averaging a team-high 14.6 points and 7.1 rebounds. Wagner is capable of backing down on an opponent, as well as take his game out to the perimeter. He's a force on the offensive glass and was a difference-maker in the Wolverines' Final Four game against Loyola-Chicago. Wagner was a standout, tallying 24 points, 15 rebounds, and three steals.

"I can't say that we've seen a big guy as dynamic as him, but we'll go back and watch tape," Villanova assistant coach Ashley Howard said. "Michigan's team is a lot more than him. They're a really good team. He's the focal point, they play through him, but they have some other good players around him. We'll figure out the best way to gameplan for those guys as a unit."

Michigan also has the services of Charles Matthews, a Kentucky transfer that has played very well in his first full season with the Wolverines. He provides a slashing threat, one that's capable of scoring at a high clip. Matthews has also proven to be a solid rebounder out of the guard position. He's similar to the all-around weapon of Muhammad-Ali Abdur-Rahkman, although Abdur-Rahkman is a much better shooter from deep. Both players are averaging over 12 points per game this season.

As good as these players are, defense -- as an entire team -- has paved the way for the Wolverines up to this point.

Led by the hard-nosed defensive effort of sophomore Zavier Simpson, Michigan has one of the top defenses in college basketball.

According to KenPom, the Wolverines have the third-highest defensive efficiency in Division I. They also excel at running opposing teams off the three-point line, holding opponents to taking just 29.8 percent of their shots from long range (fifth-lowest in Division I.) Aside from that, they've been able to restrict their foes to shooting just 33.0 percent from beyond the arc.

"They are a very good defensive team," Phil Booth said. "They switch a lot. They play really well together and play off each other. They are going to be a very tough team. We are going to go out there and try to execute as best as we can."

As dominant as they were in the lopsided 93-75 Final Four victory that seemed decided in the opening minutes, the Wildcats are focused on areas for improvement. Instead of figuring out how to get their threes going against the stingy Wolverine defense, they will be placing the emphasis on the other areas of the game -- aspects that were masked by an unseen shooting performance.