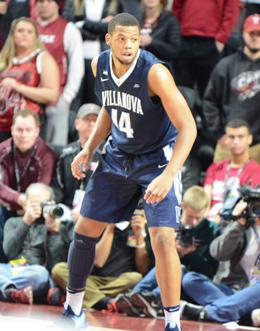 Omari Spellman wasn't around for Villanova's previous trip to the Final Four, but that didn't stop him from introducing himself to millions of viewers worldwide on college basketball's biggest stage.

In Saturday's Final Four game, Kansas tested him early, as the Jayhawks went straight to the hulking 7-foot Udoka Azubuike for the game's first basket. He posted up Spellman and finished over his left shoulder, and the big 280-pound center made it look easy.

However, that was probably the only highlight Azubuike had against Spellman. The 6-foot-9 redshirt freshman answered back with a pair of threes and a hard-fought effort on the glass, while adding a boisterous exuberance that came with every made three, dunk, rebound, and victory in claiming 50-50 balls.

Spellman, who was still a high school senior during Villanova's previous championship run in 2016, missed out on an opportunity to play in the last season when the NCAA declared him ineligible.

He was a spectator in what was another 30-win season for 'Nova. Spellman didn't get to play in the NCAA Tournament, and watched his team disappoint in the Round of 32.

This year, Spellman has risen up to the expectation that surrounded him coming out of high school as a five-star recruit. After a delayed start to his career, he's only gotten better over time.

Now, he's playing some of his best basketball, averaging 12.2 points and 8.4 boards per game through five NCAA Tournament games. Against Kansas, he enjoyed a double-double performance, with 15 points and 13 rebounds, as well as three blocks to go with them.

"We had a lot of different guys take a year out just to get better, get stronger," said teammate Phil Booth, who redshirted alongside Spellman last season. "In the game, it helps you a lot. You also have to watch, it makes you hungry, it makes you want to be a part of it."

The redshirt year certainly helped build up the anticipation for Spellman's debut, but it also built up his game. Apart from getting used to a much-faster tempo and increased level of competition, he also got in much better shape, trimming himself down to a more sculpted 245 pounds.

Spellman is a unique type of center, one that can stretch the floor but isn't afraid to rumble inside. Most of his offense comes from beyond the arc, where he leads the 'Cats with a 44.6 three-point shooting percentage. On the other end of the court, he's a physical presence on the boards and a needed rim protector. His versatility has been a difference-maker this  season.

As Spellman plays well on the court, it seems like his confidence skyrockets, as he stuffs various categories on the stat sheet. Although he might not be the most vocal off the court, on the court, he isn't afraid to let his emotions run loose.

Although it was something he was more open to showing, he's gradually become less expressive and more focused on the court--with a few exceptions, like a strong rejection or a timely three-pointer.

"When we get out there, whether it's the Final Four, the very first day of practice -- once we step into those lines, nothing changes," said Villanova assistant coach Ashley Howard of his message to Spellman and the lesser experienced players in handling the unique environment. "If you have that mindset, then it's easy. It helps eliminate some of the distractions that come along with playing on this stage -- which is an unbelievable experience -- but when you're playing with your teammates, you got to stay consistent with what we've been doing."

Consider the message received for Spellman, who hasn't shown many nerves of playing in the high-stakes platform of the NCAA Tournament.

Now, he and his teammates are just one game away from holding up the trophy and returning to the top of the college basketball landscape. While a deep run might conjure a few "what if" scenarios with Spellman last season, the Wildcats in a prime position to capture their second national title in three years.

"Just coming out, ready to compete and defend and rebounding, and continue to do what we do," Spellman said about keeping the edge for Monday's championship game. "We don't pride ourselves on shooting the ball well. We pride ourselves on defending and rebounding and that's our true measure of success in playing Villanova basketball. So, we're definitely oging to look to come out and do that on Monday."