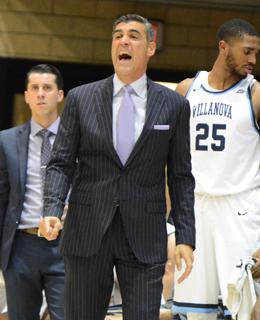 Jay Wright (above) and Villanova are back in the national championship game for the second time in three years. (Photo: Josh Verlin/CoBL)

SAN ANTONIO -- Villanova didn’t set the single-season NCAA Division I 3-point record just from its effort in its Final Four matchup against Kansas on Saturday night at the Alamodome.

It just felt that way.

"Hey, give Villanova credit," Kansas coach Bill Self said afterwards. "They were unbelievable."

Jay Wright has built his team’s offense around a deadly perimeter attack, but the show that the Wildcats put on in a 93-75 romp of the Jayhawks was something to behold, indeed.

Villanova set a new Final Four record with 18 3-pointers, tying the old one by halftime and coming within three triples of the NCAA Tournament’s high-water mark.

It was a relentless attack from deep no matter which way you slice it: seven different players connected on a triple for the Wildcats, who were 18-of-40 (45.0 percent) overall. They made almost as many 3-pointers as Kansas had attempts (21) and it wasn’t until the final 10 minutes that the Villanova's 2-point shots (25) outnumbered its 3-point makes.

“That was just one of those nights," Wright said. "I feel bad for Kansas, they’re a great team -- we just made every shot, and that happens sometimes."

That was plenty good enough to move into a game against Michigan (33-7) on Monday night in a hunt for the program’s third national title.

Eric Paschall led the way with 24 points on 10-of-11 shooting, including 4-of-5 from deep. Jalen Brunson added 18 while Omari Spellman and Donte DiVincenzo each chipped in 15 for a Wildcats squad that placed six players in double figures.

"My teammates found me some good shots, they trust me and my coaches trust me and that gives me confidence," said Paschall, a redshirt junior forward and Fordham transfer now in third year with Villanova, and second on the court. "It just feels good to keep playing."

Villanova (35-4) wasn’t quite as dominant as it was at this point two years ago, when it blasted Oklahoma 95-51 to move into the national championship game, where Kris Jenkins famously hit the 3-pointer that lifted the Wildcats to their second-ever title.

Kansas was far from poor offensively, hitting 45 percent overall (28-of-62) and and 7-of-21 (33.3 percent) from deep, but the Jayhawks never had a chance the way Villanova lit up the nets.

The Wildcats entered Saturday night just six triples shy of the 2006-07 VMI squad, which knocked down 442 3-pointers to set the Division I single-season record.

It was clear that mark wouldn't last much longer once this one got underway. Paschall, Spellman and Bridges each knocked down triples in the first three minutes, and the rest of the team followed their hot start.

'Nova tied the mark on a 3-pointer by Collin Gillespie less than seven minutes in, which put ‘Nova up 22-4 on a shell-shocked, Kansas-heavy crowd.

"Man, we made every shot to start the game," Wright said. "When do you that...if you're a decent free-throw shooting team, it's tough to come back on that."

The Wildcats didn't even need to rely on their foul shooting, taking only seven free throws, making five. They could have avoided going to the line altogether and still won by double figures.

Kansas found its footing after the rocky opening stretch -- enough to keep Villanova from making a blowout of their national semifinal, but not enough to ever put a serious scare into the Wildcats.

The deficit never again dropped into single figures; it was a dozen at several points late in the first half, but never got below 14 after intermission.

And so Wright has his squad playing for all the marbles, for the second time in three years. If they shoot it like they did Saturday night, it’s tough to see anybody stopping them.

"We'll celebrate when the job is done," Spellman said. "No need to celebrate tonight, because we have a big one on Monday."