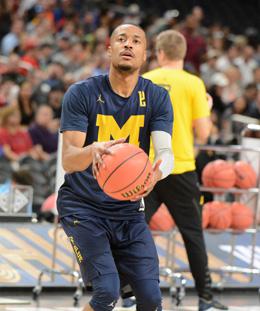 Allentown's Muhammad-Ali Abdur-Rahkman is at the conclusion of an unexpected high-major career. (Photo: Josh Verlin/CoBL)

A trip to the Final Four is what many college basketball players dream of, but for Michigan's Muhammad-Ali Abdur-Rahkman it's a little too surreal.

Aside from it being college basketball's biggest stage, there probably isn't a lot of people who would have thought he would have ended up in this position. Sometimes, he can't believe it himself.

"As of lately--in between the Elite Eight and the Final Four--I've been thinking about it like man, I have come a far way," Abdur-Rahkman said. "Going not recruited by any high majors. basically going to commit to a school. that wanted to offer me, then they didn't want to offer me a scholarship anymore. That gave me a chip on my shoulder to work harder and harder everyday."

Abdur-Rahkman, a senior at Michigan, has played an integral role for the Wolverines this season. He is one of their captains and top scorers, averaging 12.8 points per game. He helped his team return to the Final Four for the first time since 2013, as well as back-to-back Big 10 tournament championships.

Individually, he was an All-Big 10 honorable mention and landed a spot on the Big 10 and West Region all-tournament teams.

Four years ago, this would all seem unimaginable for Abdur-Rahkman, who couldn't seem to fully grasp the attention of Division I programs. Now, a 1,000-point scorer at Michigan, there are probably coaches out there that regret passing on the 6-foot-4 guard.

The Allentown native played at Allentown Central Catholic High School, where he was a four-time PIAA Class AAA All-State selection. During his time there, he racked up 2,136 points, saving the best season for last.

As a senior, he averaged 23.6 points per game, leading the Vikings to a spot in the state playoff quarterfinals.

Despite his high school accomplishments, high-major Division I colleges just didn't buy in. Abdur-Rahkman had a number of mid- to low-major Division I offers, until Michigan got involved late in the process. Then, other schools followed suit, but he had made his commitment to play for John Beilein.

"I think the expectations of recruits are just--they're crazy, because your kids are labeled as a 15-, 16-, 17-year old, and the expectation of people that he couldn't play at Michigan," said Bielein of Abdur-Rahkman. "We saw some intangibles there. We saw some athleticism there."

Not only did Beilein believe in him enough to recruit and offer him, but Abdur-Rahkman also received a steady helping of minutes as a freshman. Early on in his sophomore year, he cracked the Wolverines' starting five and became a permanent fixture there.

The mild-mannered senior guard may not be the most vocal, but allows his play and actions on the court to speak for him--just as he did when he was being underrecruited. He's an all-around valuable asset, one that can score from long range or by attacking the basket, as well as bring an aggressiveness to the glass. He can also facilitate and dish out assists, while demonstrating a great ability to take care of the ball.

Abdur-Rahkman has played in 39 games this season, only turning the ball over 30 times. According to KenPom, he boasts the lowest turnover rate in the Big 10, and the 11th-lowest in the entire country.

"One year he was so young we didn't make the NCAA Tournament," Beilein said. "The next year we made it, but he was allowed to play through mistakes because we didn't have anybody else, and that really helped him grow. Then, last year, we had a really good team. He was a complementary piece. Right now, he has ascended far from being a complementary piece for us."

Saturday's Final Four game against Loyola-Chicago marks Abdur-Rahkman's 143 career game in the blue and maize--the most ever for any Michigan Wolverine. He will surpass the previous mark set by former teammate Zak Irvin and 2014 graduate Jordan Morgan.

Abdur-Rahkman's father, Dawud, is currently the coach at Lehigh Carbon Community College, a junior college in Pennsylvania. Prior to that, he had lengthy stints as an assistant for Division III Muhlenberg and at Division I-level Howard.

He's gotten to see the different levels of college basketball growing up. He also got to see Division III players that he believes had the talent and skills worthy of a Division I scholarship. They just weren't as fortunate as Abdur-Rahkman, but he worked to avoid suffering that same fate.

Abdur-Rahkman has played a part in Michigan's resurgence, one that includes a Sweet 16 run last season and trips to the Elite Eight and now the Final Four. He hopes to go even further and bring back the first national championship since 1989, but first, he and his teammates will have to deal with the Cinderella Ramblers in the Final Four.

Loyola-Chicago, much like Michigan, has used a tough defensive effort to set the tone in this journey. As good as the Ramblers are on that end of the court, don't expect the equally hungry Wolverines to back down.

"They play great team defense, they're great individually too," Abdur-Rahkman said. "At this point, no one wants to go home. Everyone is struggling, fighting to the end."