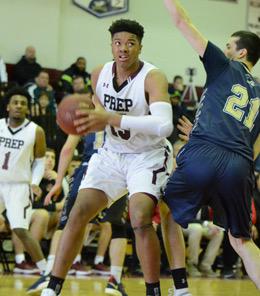 St. Joe's Prep forward Ed Croswell (above) is waiting to see who his college coach will be at La Salle next season.

CONSHOHOCKEN -- The first round of the Donofrio Classic continued into its fourth night of play on Thursday at the Fellowship House, with two more games taking place in the 58th edition of the annual high school all-star tournament.

Game one:  After taking a 13-point lead into the half, Hunting Park 1’s interior defense was too much for Filly Sol in the second, as it picked up a 92-71 win. Holy Family commit Dymir Montague (Neumann-Goretti/2018) had 18 points. La Salle commit Ed Croswell (St. Joe’s Prep/2018) finished with 14. Khalil Turner (Sankofa Freedom/2019), Fatayn Wesley (Imhotep/2019) and Jalen Watkins (Mastery South/ 2019) all reached double figures as well. On the other side, Yazid Powell (Rocktop Academy/2019) had 24 points, finishing with a handful of dunks at the rim. Hunting Park 1 will play against Coaching Victory and Seton Hall commit Valdir Manuel on April 9.

Game two: This one turned into a glorified pick-up game down the stretch as the Old School Cavs, filled with some local and out-of-state talent, rolled to a 104-64 win against Del Val VC. Zach Crisler (La Salle/2019) had 21, while Penn State commit Myles Dread (Gonzaga College HS/2018) made the trek from the D.C. area to score 19. St. Joe’s commit Jared Bynum (Georgetown Prep/2018) rode up with Dread and scored eight points. The other leaders for the Cavs were Samier Kinsler (West Catholic/2019) with 15 and Archbishop Carroll sophomore AJ Hoggard with 14. Another Explorer paced Del Val in scoring. Allen Powell (La Salle/2019) led the team with 16 points, including four 3-pointers. Old School Cavs will play against Just Clean it on April 9.

When fellow DMV product Myles Dread asked Jared Bynum to play with him in the Donofrio Classic last week, Bynum jumped at the opportunity.

Bynum, a 5-foot-9 point guard from Georgetown Prep, is committed to play at Saint Joseph’s next year. Despite the lengthy commute, he thought it would be a great experience to play near the city he’ll call home for the next four years.

He and Dread, who is heading to Penn State next season, made the two-plus-hour trek to Conshohocken on Thursday to play in the Donofrio Classic for the Old School Cavs.

“I love playing in Philly,” said Bynum, who mentioned that he walked around St. Joe’s campus earlier in the day. “That’s kind of the reason I wanted to come up here and play when I got the opportunity.”

Bynum scored eight points, all in the first half, for the Old School Cavs in their 104-65 win against Del Val VC on Thursday. With his team up by a large margin, Bynum’s minutes were limited in the second half.

The Hawks commit wasn’t sparkling in his Donofrio debut, but he showed off an impressive handle and knocked down a 3-pointer off the bounce. He beat his man to get into the paint a handful of times but couldn’t quite finish at the rim. Still, it was clear the future Hawk is oozing with talent.

He is on Spring Break for the next two weeks and said he is trying to come back up for the team’s game against Just Clean It on April 9.

“My team won by a lot, so I didn’t really have to do much, but it was cool to get up here and play and meet some Philly guys and show my face a little bit,” Bynum said.

Bynum averaged about 17.5 points and six assists per game this season for Georgetown Prep (20-5) to earn first team All-Met honors from the Washington Post.

The Maryland guard, who is rated a 3-star recruit by ESPN, Rivals and 247Sports, committed to the Hawks last spring before singing his National Letter of Intent in November.

Bynum is St. Joe’s only commit for the 2018 class. The Hawks lose their top scorers in Shavar Newkirk and James Demery, but have five of the other top seven members of their rotation back. Also returning are forward Charlie Brown and guard Lamar Kimble, who were expected to be two of the teams top players before suffering season-ending injuries.

"They like how I can run a team, also how I can score really well, but also get guys involved," he added. "Passing, spreading the floor out with my shooting,  just the way I play fits their program perfectly, that's basically what they told me."

Bynum had the chance to see St. Joe’s in person when the Hawks played Rhode Island in Washington D.C. during the Atlantic 10 Tournament semifinals earlier this month. He said several Hawks fans came up to him and said how excited they were to see him play next year.

A few more St. Joe’s fans showed up at the Fellowship House on Thursday to watch the future Hawk.

“It’s really cool how guys already know who I am before I get to campus,” Bynum said. “Just knowing I’m welcomed to a great program like St. Joe’s is a great feeling.”

Like many others, St. Joe’s Prep forward Ed Croswell, who committed to the Explorers in September, was surprised by the news. He got a call from Giannini when the decision was made.

“It was tough,” Croswell said. “He called me right when it happened. He told me, ‘You’re in good hands. They’re going to take good care of you at La Salle.’”

La Salle graduates center Tony Washington, forward B.J. Johnson and guards Johnnie Shuler and Amar Stukes, while it is yet to be determined if guard Pookie Powell will be granted a sixth year of eligibility.

Croswell is one of four incoming recruits for the Explorers next season. For the time being, center Osun Osunniyi (Putnam Science, Conn.), power forward Jared Kimbrough (Neptune, N.J.) and shooting guard Jack Clark (Cheltenham, Pa.) are also set to join Croswell in North Philadelphia next season.

Since the news broke, Croswell said several members of La Salle’s basketball program and athletic department have reached out to him to let him know they want him to stick around. He said he is still firmly set on joining the Explorers next season.

“It’s close to home, they play in a good league,”  Croswell said. “I think I can be very successful at La Salle as a basketball player.”

La Salle Athletic Director Bill Bradshaw told CoBL last week that he will not hurry the decision for the Explorers’ next head coach, but at the same time he realizes that in order to secure the current four commits and prepare for the upcoming recruiting period, he needs to move quickly.

All Croswell can do at the moment is wait until a final decision has been made.

“It should happen quickly,” Croswell said. “We shouldn’t have to wait around too long, but I’m looking forward to seeing who it is. Once I see who it is, I want to sit down, talk to him and see where his head’s at, pick his brain, because he’s going to be my next coach.”

Yazid Powell thought he was going to spend his senior season playing with his friends at Overbrook. Instead, the West Philly guard was ruled ineligible to play at the school following a transfer from West Philadelphia.

While the Panthers made a trip to the PIAA playoffs, Powell attended Rocktop Academy, showcasing  himself around the country from Florida to California.

“It was tough, obviously I couldn’t play with my friends,” Powell said. “We had a plan, but it didn’t go our type of way.”

“I liked it,” Powell said of his time at Rocktop. “I like traveling.”

Though the season didn’t quite work out as planned, Powell got the opportunity to share the floor with his buddies once more on Thursday night. Powell joined Overbrook’s Khalif Washingotn, Cyrie Coates, Tyhee Taylor and Ray West for Filly Sol’s Donofrio Classic matchup with Hunting Park 1.

Powell and his teammates were on the wrong side of a lopsided contest, but there were signs the chemistry was still there when Washington drove the lane and left a lob for Powell to slam home very early in the game.

“We were so excited earlier,” Powell said. “We were happy talking about it and all, especially playing with ‘Leafy,’ Khalif Washington. He’s my little guy.”

Powell, who had 24 points on Thursday, said he is taking a prep year at the Robinson School (N.J.) next season.

At the moment he has one Division I offer from Central Connecticut State. He said Southern Miss, Binghamton, Towson, Florida International and Florida Gulf Coast are among the other programs who have expressed interest. He added that Ole Miss recently reached out to him.