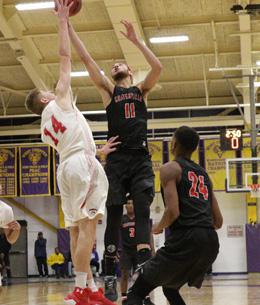 Coatesville's Tyrel Bladen (above) is trying to figure out his college plans after de-committing from EKU. (Photo: Tommy Smith/CoBL)

CONSHOHOCKEN -- The first round of the Donofrio Classic continued into its third night of play at the Fellowship House, with two more games taking place in the 58th edition of the annual high school all-star tournament.

Game Two: Keystone Blazers took down Team Hardnett by a final score of 97-80. Ahmad Williams (2018/Plymouth-Whitemarsh) led the Blazers to the victory by putting up 20 points. NaHeem McLeod (2019/Plymouth-Whitemarsh) threw down some big dunks, and Malik Green (2018/Simon Gratz) finished strong in the paint, and hit a few threes. For Team Hardnett, Daquan Greenberry (2018/Chichester) led all players with 21 points.
~~~

McHale was let go after three underwhelming seasons as Colonels head coach. He combined to finish with a record of 38-55 (.409) and not once did he finish above .500 in a single season.

“One of the biggest reasons why I picked EKU was because of the coaching staff and the plans that they had for me and the potential they saw in me,” Bladen said. “It was very promising to me, but hearing that he got let go (was) very discouraging.”

But the 6-foot-9 Bladen decommitted long before Hamilton arrived as coach as he made his decision public on March 1 via Instagram. Since he made the decision to re-open his recruitment, Bladen said he has heard from schools such as Delaware, Hampton, Robert Morris, Wagner and Hartford, to name a few.

Bladen is coming off of a year that saw Coatesville finish with a 22-9 record but couldn’t quite get it done come playoff time, as they fell in the quarterfinals of the District 1 6A tournament to C.B. West, and fell in the first round of states to Hempfield.

“I feel like we didn’t reach our expectations,” Bladen said. “I feel like we could’ve been a lot better but I feel as if we grew as a team and we really played like brothers out there night in and night out.”

As for what’s ahead for Bladen, he is planning on playing AAU on the EYBL circuit with The Playaz Club (N.J.) in April as he tries to squeeze out as many offers as he can. So far, no team has officially offered Bladen yet but an impressive showing on the EYBL circuit could net him at least one offer.

Prep school is under consideration, but Bladen said that he hasn’t even started looking at potential prep schools he could attend.

“I’m more worried about the AAU season coming up and seeing what I can do there,” Bladen said. “I’m just trying to put in 100 percent every time and really just show everybody what I’m capable of.”

After experiencing what it’s like to sit out a whole season this past year, Mike Davie hopes he doesn’t have to do the same next year.

Davie tore his ACL in his right knee last June at the West Chester team camp, and was told we couldn’t return to play for 6-12 months. After sitting out and rehabbing during his senior year at Chichester, Davie ended up playing in one game; the team’s final game, a 50-45 loss to Holy Ghost Prep in the first round of the PIAA District 1 tournament.

A 6-foot-9, 250 pound center, Davie has been told by numerous colleges that redshirt year might be the way to go, but Davie doesn’t have the same mindset.

“They are saying redshirt, but I can’t do another year on the sideline,” Davie said. “I just don’t know if I can take another year off.”

Before the injury, a few Division II schools were interested in Davie, but now it looks like D-III programs are chasing after him the most. Penn-State Brandywine, Cabrini, and Arcadia are three schools recruiting Davie the most as of now.

Davie’s dropstep in the paint was his strongest move before the knee injury. Playing in the post was also a strong suit of his, since he typically has a height and weight advantage over his opponents.

Since he got injured, Davie has been working to try and get rid of the nerves once he gets on the court.

“For the first minute I am nervous, then once I’m in the game I’m not worried about anything,”Davie said. “I got nervous and stuff with that twisting on my knee. After I get comfortable I’m fine.”

Also while Davie has had time off, he’s worked on his shot. Since he can’t do any contact play with rehabbing, shooting around was an alternative option that might help long-term.

“Before I couldn’t shoot,” Davie said, “but now I have developed my shot, and I’m waiting to get comfortable in the game where I can start shooting.”

-- One of the more prolific scorers in the local 2018 class, Garnet Valley’s Austin Laughlin continued his shooting on Wednesday night, hitting six 3’s, and scoring 25 points. Laughlin holds just one offer; from D-II Holy Family, which he plans on visiting soon. Georgian Court and Pitt-Johnstown, who have shown interest, are both scheduled to be visited by the 6-foot-1 sharpshooter next week. PSAC schools such as West Chester, Bloomsburg, and East Stroudsburg have also shown interest in Laughlin.

-- Although he doesn’t have any offers yet, 2019 Episcopal guard Matt Dade says Kent State, Lafayette, and Holy Cross are expressing the most amount of interest in him thus far. A 6-5 guard/forward, Dade scored 19.3 points a game for the Churchmen last season, and was first team all Inter-Ac. On Wednesday night, Dade scored 18 points, most of which came from tough finishes around the hoop. Dade hopes to boost his recruitment this summer with East Coast Power.

-- Archbishop Carroll wing Keyon Butler has offers from five different D-II schools: East Stroudsburg, Holy Family, Clarion, Chestnut Hill and Lock Haven. The 6-foot-3 forward visited Chestnut Hill but plans on visiting the rest of the bunch over the next few weeks. Butler is not sure when he will commit as he said he’s just trying to take everything slow and not make an impulsive decision.